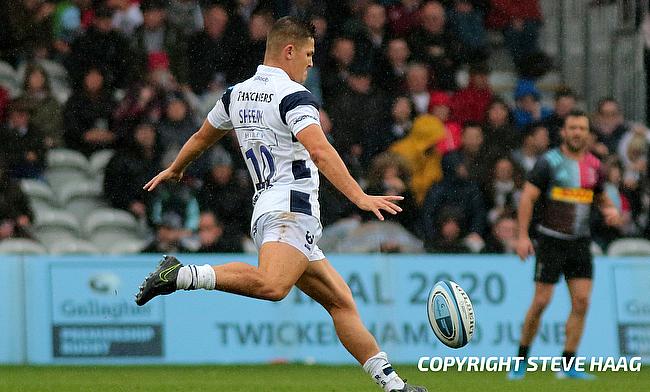 Callum Sheedy was part of the winning Bristol side
©Steve Haag

Toby Fricker scored a double including a try in the closing minute as Bristol edged out Gloucester 29-28 in the latest round of the Gallagher Premiership at Ashton Gate on Friday.

This is seventh win for Bristol in 21 games as they climb to the 10th place in the table while Gloucester missed an opportunity to break into the top four.

It took Bristol just two minutes to open their account as Harry Thacker touched down at the back of a driving maul and in the sixth minute, Steven Luatua created the break for Andy Uren to touchdown. Callum Sheedy kicked both the conversions as the home side raced to a 14-0 lead.

Sheedy added a penalty to further extend the lead but the Cherry and Whites bounced back with three tries in the remainder of the opening half. First it was Louis Rees-Zammit, who showed great pace and sent an offload for Charlie Chapman to score in the 15th minute.

Adam Hastings, who kicked the conversion sent an inside pass for Rees-Zammit, who scored their second try in the 23rd minute reducing the gap down to three points. Gloucester seized into the lead as Harris collected the inside ball from Freddie Clarke to dot down and Hastings' conversion made it 17-21.

As both the teams were desperate for breakthroughs in the second half, the visitors lost Freddie Clarke to sin-bin for a deliberate knock on and immediately Bristol made use of the numerical advantage with Toby Fricker burrowing under the posts and Sheedy's conversion made it 24-21.

Bristol had to play the final 11 minutes with 14 players as Sam Bedlow was sent-off for a high tackle on Hastings and Gloucester clawed their way back with Jack Singleton going over at the back of a Gloucester maul to make it 24-28 before Fricker went over for his second in the 79th minute to snatch a win for Pat Lam's side.