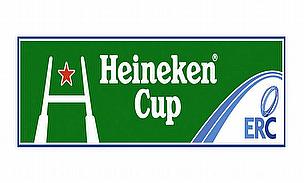 Yannick Nyanga's last gasp winner sealed a Semi-Final spot for Toulouse in a dramatic 20-27 victory over Biarritz in the Heineken Cup.

In an end-to-end action packed game, the defending Champions managed to secure victory after throwing away a 17-0 half time lead at the Estadio Anoeta.

Tries from CÃ©dric Heymans, Maxime Medard and the boot of David Skrela had given the away side a healthy lead.

But Dimitri Yachvili rallied his side in the second half and drew level through four penalties and Ilikena Bolakoro's try to taking the game into extra time.

It was deep into in the second period of extra time when Yachvili's clearance was charged down by replacement Nyanga to start the away sides celebrations in this all French Quarter-Final.

The opening exchanges were fairly even with perhaps Biarritz slightly edging it in open play.

The first try went to the visitors after Vicent Clerc's half-break and offload to France teammate Heymans. He raced away and made Iain Balshaw look like he was wearing concrete wellies before Takudzwa Ngwenya's cover tackle flung him over the try-line. David Skrela conversion was successful. Biarritz 0 Toulouse 7

The France Fly-Half's conversion looked like it would be one of his last actions of the match after colliding with Erik Lund and being knocked out.

Luckily he was back of his feet and made a Lazarus style comeback ten minutes later, but not before fourth choice Scrum-half Nicolas Bezy could showcase his skills with a perfect cross-field kick to put in Medard. Bezy undertook kicking duties and converted on 25 minutes. Biarritz 0 Toulouse 14

The rain came pouring down and the Basque-side were penalised for offside. Skrela extended the lead by three more points from his boot. Biarritz 0 Toulouse 17

It isn't the first time this season Biarritz have needed a huge comeback after being 21-0 down at home to Perpignan- they came back to win that game 23-21.

With that in mind, the home side finally registering points immediately after the break. Toulouse were punished for offside after ragged play from the kick-off and Yachvili kicked the points. Biarritz 3 Toulouse 17

The lead was cut again when Louis Picamoles was penalised for tackling with no arms. Biarritz 6 Toulouse 17

On 55 minutes, last year's runners up were given another kickable penalty for offside with a fracas following the offence. Yachvili exerted more pressure curling the ball through the posts from the right-hand side. Biarritz 9 Toulouse 17

Biarritz were looking much brighter in this second half after what can only be described as a dire first.

The Champions looked like they had ridden the storm until Heymans knocked on retrieving former England star Iain Balshaws long kick. From the scrum the pack buckled and Yachvili narrowed the deficit to just five points. Biarritz 12 Toulouse 17

The France Scrum-Half was now controlling things and made an electric break, the ball was spread wide and Florian Fritz was carded for a high tackle.

Biarritz were firmly on the front foot and dominating at the scrum. They elected for the set piece instead of the points and after continuous penalties, the home fans were urging English referee Wayne Barnes to give a penalty try.

This didn't come and Toulouse finally got their act together and turned the scrum for the turnover and then were awarded a penalty.

The action was relentless and when Yachvili was taken out in the air, the Biarritz pack took the line-out but lost it and Toulouse cleared.

Then in a dramatic finish to normal time, Skrela- who on several occasions had threatened to have his kicks charged down- ran out of luck. His kick was blocked and Ilikena Bolakoro picked up the pieces and raced down the line to score in the 79th minute.

All the pressure was on Yachvili to send his side into the Semi-final of the Heineken Cup and complete an incredible comeback. But his kick from the far left-hand side drifted wide by the narrowest of margins.

The game headed to extra time, a fantastic half for Red and Whites.

Extra time began and Toulouse took the lead again after a mix up between Balshaw and Nbwenya under the high ball resulted in a penalty for killing the ball at the ruck. Skrela turned villain to hero to put his side ahead. Biarritz 17 Toulouse 20

The home side started the second period of extra time by advancing slowly in opposition territory.

Tired legs started to show and injuries started to creep in. Scrum-Half Bezy was carried off and replaced by Jean-Marc Doussain as Toulouse Half-back woes continued.

But a penalty for not retiring gave Biarritz a penalty from 40m in front of the posts. Yachvili, with the weight of the Basque world on his shoulders, showed a cool head to convert. Biarritz 20 Toulouse 20

Then in the dying embers of the game came the definitive moment.

Nyanga charged down Yachvili's clearance inside the 22 and recovered the ball to go in under the posts and give Toulouse a dramatic last gasp win. An easy conversion for Skrela ensured the home team hearts were broken. Biarritz 20 Toulouse 27

The defending Champions march on, the final score Biarritz 20 Toulouse 27