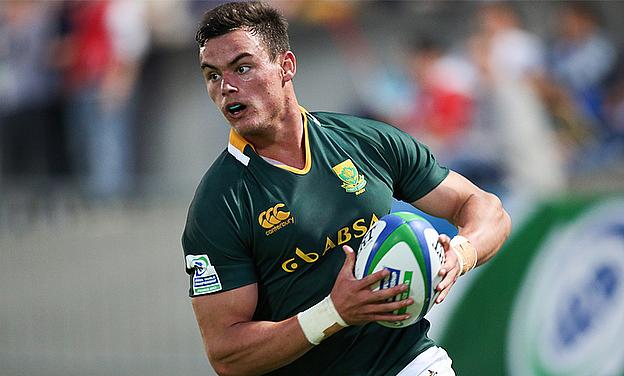 Jesse Kriel is a star for the future
©PA

The life of the age-less Stefan Terblanche!
The South Africa scorcher Senatla
Springbok Sensation set to light up 2015
SOS - Save Our Springboks!

The Springboks saw off the challenge of the World XV this weekend, beating the select side 46-10 at Newlands in Cape Town.

The match doesn’t tell us a massive amount about South Africa’s prospects at the upcoming Rugby Championship or Rugby World Cup, as a fair amount of rust was being shaken off during the 80 minutes, but overall it was a very impressive outing from the Springboks.

Matches against invitational sides often come with asterisks, but the performance by Jesse Kriel certainly highlights him as a man capable of being a potent weapon for the Springboks going forwards.

The 21-year-old was in sparkling form during the Bulls’ 2015 Super Rugby campaign, playing assuredly and with ambition from fullback. He led all South African players in metres made, despite playing in one of the more conservative franchises in the competition, whilst his tactical kicking and positioning flourished with the set-piece-centric Bulls.

The match against the World XV saw Kriel move back to outside centre, a berth he filled exceptionally well for South Africa’s U20 side during the 2013 and 2014 Junior World Championships. His appearance for the Springboks on Saturday made him the second player from those squads to graduate to the senior squad, albeit in an uncapped match, with the first being his club teammate Handré Pollard.

Kriel fitted seamlessly into South Africa’s back line, linking well with the likes of Damien de Allende and Willie le Roux, and generally looked a threat both as a carrier and as a playmaker further along the back line. He may have been running out against an impromptu defence but the Bull showed his class and that he has clearly lost none of his ability in the tighter confines of the midfield.

If Kriel can convince Heyneke Meyer that his international future should be at outside centre, then he potentially solves a tricky problem for the South African coach, as the 13 jersey has been a source frustration for the Springboks of late.

Jean de Villiers made his comeback from injury on Saturday and though obviously a big boon for the Springboks, does increase the bottleneck of talent in the midfield, with the veteran now competing with Damien de Allende and Jan Serfontein for the inside centre spot. One of the three could well be shifted outside to 13, but competition at outside centre is far less fierce and Kriel has every opportunity to cement himself as the number one option at the position.

Those opportunities for Kriel will likely come in the form of The Rugby Championship, where South Africa will play Australia, New Zealand and Argentina, before playing one further game against Argentina and heading north for the Rugby World Cup. It will be a tough task for Kriel to lockdown the jersey with so little time before the RWC, but he is certainly one of the form men in South Africa and more than capable of successfully doing so.

Kriel’s versatility and ability to cover anywhere from fullback to the midfield should also work in his favour in terms of RWC selection, as they are much desired attributes within a 31-man squad and facing a heavy schedule of physical rugby with little time for rest.

The next month will likely be the biggest of Kriel’s burgeoning career to date and impressing in these upcoming games could be the difference between him featuring heavily at 13 for the Springboks or sitting behind the likes of le Roux, Pat Lambie and Frans Steyn in Meyer’s fullback pecking order.