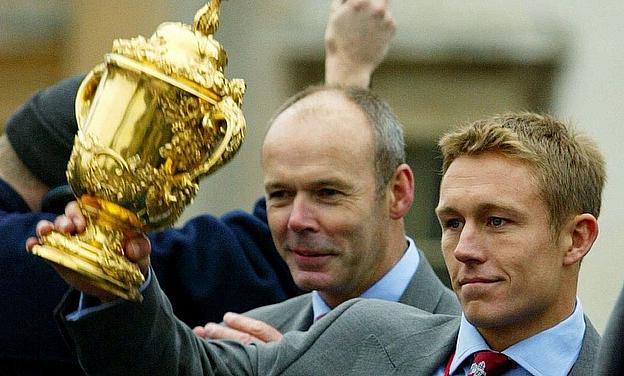 Gosper defends England tweet
Tartan Kiwi playing in England for Irish
Olympic Stadium to make rugby debut
Rising Rebel: 2015 is the time for McMahon to cement his place as a Wallaby

ITV will reunite a number of England's 2003 World Cup-winning heroes as part of their broadcasting line-up for this year's tournament.

Jonny Wilkinson, Lawrence Dallaglio and Jason Robinson and the coach who led them to that victory, Sir Clive Woodward, will all be studio pundits for the tournament.

England will host the competition, which starts on September 18, and the achievements of Woodward's side have set the benchmark for Stuart Lancaster's current squad as they look to win on home soil.

Wilkinson unforgettably kicked the winning drop goal for the Red Rose against Australia in the final 12 years ago, while Robinson scored England's only try in the topsy-turvy 20-17 triumph after extra-time.

George Gregan, who skippered Australia that day and also played in the victorious 1999 Wallabies side, is also part of ITV's line-up.

Former Wales and Ireland skippers Gareth Thomas and Brian O'Driscoll will also be involved in the coverage, which will be led by presenter John Inverdale.

Thomas, the first openly gay professional rugby player, reprises his broadcasting role from 2011 and O'Driscoll watches a World Cup from the sidelines for the first time since 1995 after retiring from the game last year.

Niall Sloane, ITV director of sport, said: "A Rugby World Cup hosted by England is a once in a generation event and it's our privilege as the exclusive television broadcaster to bring viewers the full impact of all the action and emotion throughout what we hope will be an unforgettable tournament.

"We believe we've assembled a world-class line up of rugby talent who, through their own expertise, experience and sheer passion for the game can help deliver the best possible coverage for those watching at home."