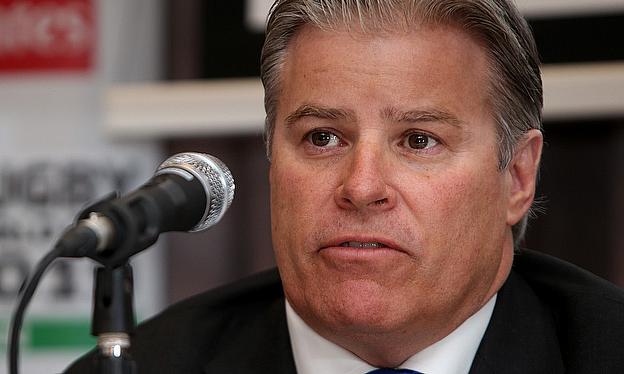 Brett Gosper admitted he may have to tread more carefully on Twitter in future, but insisted he had no apology to make
©PA

Tartan Kiwi playing in England for Irish
Olympic Stadium to make rugby debut
Rising Rebel: 2015 is the time for McMahon to cement his place as a Wallaby
Can the Rugby World Cup provide any shocks?

World Rugby boss Brett Gosper has claimed his tweet was "over-interpreted" into partisanship when posting that hosts England failing to reach the World Cup quarter-finals would be "not the words we want to hear".

England must battle it out with Wales and Australia for the two quarter-final places up for grabs in World Cup Pool A, with one major nation set for an early exit this autumn.

Wales coach Warren Gatland replied by saying Gosper "probably doesn't need to be doing that" - but the Australian World Rugby chief has moved to downplay his social media post.

Gosper conceded he had left his words open to misinterpretation.

"I think it was slightly over-interpreted, some people had some fun with it," said Gosper.

"The simple message was that it's always nice for a country to do well in a tournament that they are organising, it was nothing beyond that.

"This tournament is already going to be a huge success in terms of ticketing demand across the programmes, but only time will tell to see how well they do, and it's entirely down to them how they perform.

"We're totally neutral: it's up to each team to do what they can to get where they want to get in this tournament, and that's the way it should be.

"The vast majority of people have understood the spirit, but you can analyse a tweet a bit, and maybe I left myself open to a bit of interpretation and that's a bit of pity.

"But certainly the intention was just to talk about the atmosphere of the tournament, and how that atmosphere is helped by the home team doing well.

"It's nothing more beyond that."

"We were a little bit surprised by the tweet," said Gatland last week.

"If England are guaranteed to be one of the sides going through, I hope we are the other team."

Gosper admitted he may have to tread more carefully on twitter in future, but insisted he had no apology to make.

"The point I was really trying to make, clumsily perhaps, was that organisers of tournaments do like to see the hosts do well," said Gosper.

"There's no reliance by the tournament on England's success or not.

"From our point of view it's always nice to see the host team do well.

"If you leave yourself open to an over-interpretation then you've probably gauged your tweet slightly wrongly.

"I don't think there's an organiser out there that doesn't like to see the host team do well.

"What's been good about it is I've gained a lot of Welsh followers.

"There has been a lot of fun banter.

"I don't think there's anything to apologise for."