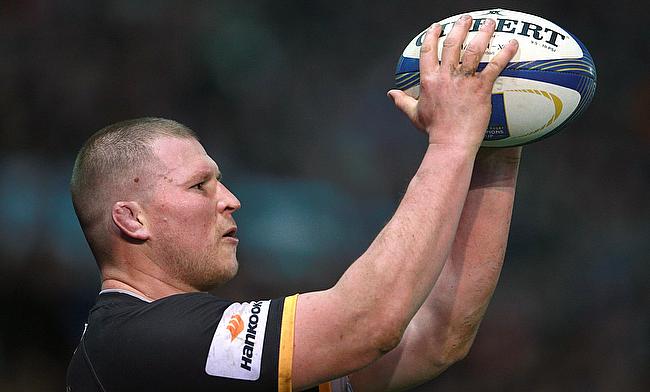 Northampton hooker Hartley is expected to be named on Monday by new England head coach Eddie Jones as skipper for this season's RBS 6 Nations Championship.

England open their Six Nations campaign against Scotland at Murrayfield on February 6.

But hooker Hartley's immediate concern was keeping Saints in the European last-eight picture, which they achieved in a rainswept Llanelli through tries by Harry Mallinder, George Pisi, Sam Dickinson and George North that secured a 22-10 verdict against the Scarlets.

"I think he will be really pleased to get some good game-time over the last two weeks. The more he plays, the better he will be."

Wales star North's 57th-minute touchdown on his return to Llanelli for the first time since he joined Northampton from Scarlets in 2013 secured the bonus point triumph Saints so badly needed to remain in contention for the Champions Cup knockout stages. Fly-half Stephen Myler added a single conversion and his opposite number Aled Thomas kicked a penalty before prop Rhodri Jones claimed a late try that Thomas converted.

It means that Northampton secured Pool Three runners-up spot behind French challengers Racing 92, and they will only fail to make April's knockout stage if Champions Cup results go against them on Sunday.

Hartley's men will not reach the last-eight should Pool Two challengers the Ospreys and Clermont Auvergne both win their games - Clermont with a bonus point - and Pool Four hopefuls Stade Francais see off Paris visitors Leicester, claiming a five-point maximum in the process.

It would be rough justice on Saints if such circumstances conspire against them, although they know that any last-eight tie will see them be away from home, and it looks set to be one of their fierce English rivals - Saracens or Leicester.

Mallinder added: "I haven't quite decided yet how I am going to handle Sunday. We need one of three results to go our way.

"It is never an easy place to come (Scarlets). It's always a challenge, particularly to get the four tries, so we are delighted to get the bonus point. We knew that we needed to play a little bit today.

"We knew that whatever team Scarlets put out they would be fighting.

"They are a proud team and a good team, and we knew it would not be easy, so we are pleased we have done our job now, we can sit back and hope that results go our way on Sunday.

"It has been pretty good in Europe for us this season - we've won four, drawn one and lost one - so we've had a relatively good pool in a difficult competition.

"We've had to really work hard. Not getting any bonus point wins has made it difficult for us and made it close, but to win four and draw one is pretty good."

The Scarlets had been eliminated from Europe before this weekend, but they at least recovered some pride following last weekend' record 64-14 European hammering against Racing.

"We wanted to be in the game, and over the 80 minutes we put in a solid performance," Scarlets head coach Wayne Pivac said.

"It was a big step up from last week."

And Pivac also confirmed that Wales international back Liam Williams remains on course to begin his comeback from injury ahead of the Six Nations when Scarlets face Guinness PRO12 opponents Connacht next week.

"Liam trained during the week with us and trained very well," Pivac added.

"It's all looking good for him to get some game-time next week."