Hartley Poised to Come of Age 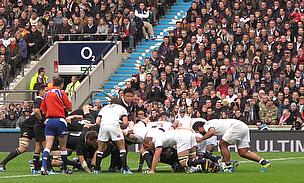 Hardly an unknown given he won his 50th England cap in November, but Dylan Hartley is a growing force in Test rugby.

The Northampton Saints Captain excelled in this autumn’s internationals, as the heartbeat of the Red Rose forwards against Argentina and New Zealand, carrying the fight to both visiting sides as Twickenham.

His hard-running, appetite for work and set-piece accuracy identified him as the outstanding hooker of the autumn and resulted in his inclusion in many of the world XV selections drawn up after the internationals had ended.

When Hartley was helped off with a bruised lung against New Zealand after tackling Richie McCaw, England's line-out crumbled and their comeback ground to a halt.

While his commitment and aggression have never been in question - as demonstrated by his hit on McCaw and subsequent admission into hospital - he has not always produced such spectacular results.

It is evidence of a player who is entering his pomp and given England's home World Cup is edging ever closer, his ascent to the peak of his powers is well timed.

"I'm enjoying my rugby. I like my role at Northampton and I love being captain."

Should the autumn's heroics be repeated throughout a strong 2014 Hartley will considered world class, a deserving crown for November but a tag better justified by a sequence of stellar performances over the coming year.

Energy and leadership are cited by the England management as his "points of difference", although in the past he has been guilty of showing too much energy in a series of incidents that undermined his leadership qualities.

Hartley's chequered disciplinary record, updated most recently by the red card received during last season's Aviva Premiership final that forced him to miss the British and Irish Lions tour to Australia, has been well documented and it is hard to see how he can be given another chance should he transgress once again.

But England head coach Stuart Lancaster will be hoping a maturing Hartley grasps the magnitude of the opportunity ahead of him as he seek players to inspire the assault on the 2015 World Cup.