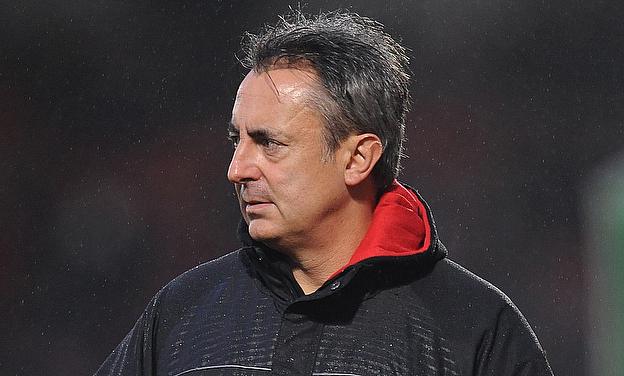 Edinburgh arrived in the west country with a record of nine Heineken away defeats from their last 10 starts, but centre Ben Atiga's second-half try and 11 points from the boot of full-back Jack Cuthbert left Gloucester reeling.

It means the west country club, who beat Edinburgh at Murrayfield last weekend, are five points behind group leaders Munster before they host the Irish heavyweights next month, with Edinburgh a further point adrift.

"It is very frustrating that we couldn't back our performance up from last weekend," Gloucester rugby director Davies said.

"We didn't manage the game at all well. Conditions dictated that you had to play in a certain way, and we got it badly wrong. Our discipline let us down as well, and it fed Edinburgh. They played the conditions better than us.

"We were buoyed by last week's performance and result, but we are still not in the groove and rhythm of winning games, and you have got to eke out wins however you can.

"In terms of Europe, all is not lost, although this is obviously a huge setback for us. First and foremost, we've got a big week ahead of us in terms of getting our domestic season up and running.

"Field position was the big thing for me today. You are not going to score 60-metre tries on a day like today, and Edinburgh ground out the win. They stuck to a pretty focused game-plan.

"The top teams know how to eke out wins, and we are not in a rhythm at this moment in time to do that. These players are good players. It's a mental thing right now."

Davies also had a few words of advice for any Gloucester players who might currently be distracted about their playing futures beyond this season.

"I wouldn't have thought it would help anyone to be thinking about other things right now," he added.

"One of the things I've told the group is that this team has to completely focus on what we are doing on the field, regardless of what other things are going on their lives. It won't be acceptable any longer that we don't fully focus on Gloucester rugby."

Gloucester claimed a 35th-minute penalty try converted by fly-half Freddie Burns, who also kicked a penalty, but they could have few complaints as Edinburgh posted a first Heineken away win since they toppled Racing Metro in January 2012.

"We felt that we let ourselves down last week, and we were determined to put things right this weekend. The players must take full credit," Edinburgh head coach Alan Solomons said.

"Defensively, we were superb, and the guys that came in all did justice to themselves. I believe we set the record straight today with our performance.

"Wins on the road are not easy. Gloucester is a famous English club and Kingsholm has a tremendous reputation. We spoke about playing with character, courage and heart, and the players certainly did that.

"We are pleased that we are back in the frame. That is really positive."

"They played in all three autumn Tests," Solomons added.

"The last two Tests were played back-to-back against the number two and number three sides in the world (South Africa and Australia), and I could see in the game against Gloucester last week there was fatigue there.

"I felt that they just had to have a break. The players who came in would be fresh. It was a win-win situation for all individuals and the team, and fortunately it has turned out that way."