Harlequins slip past Saracens with 17-10 win at Twickenham Stoop 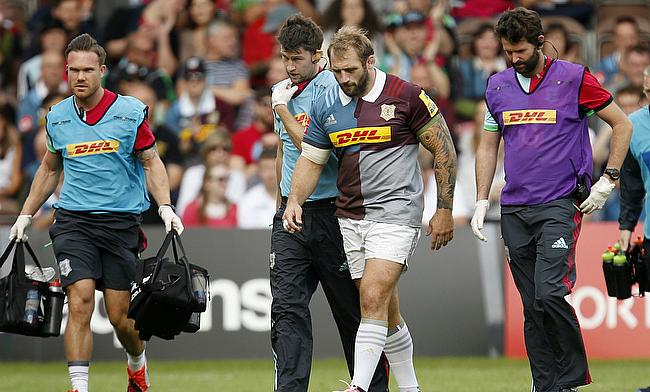 Saracens suffered their first defeat of the 2016-17 English Premiership season as Harlequins managed to slip past with a 17-10 win at the Twickenham Stoop on Saturday.

Wing duo Tim Visser (5) and Charlie Walker (20) scored tries for the hosts while fly-half Tim Swiel successfully converted both tries in addition to scoring a penalty on the fourth minute.

Scrum-half Richard Wigglesworth (42) was the lone try scorer for the visitors with fly-half Alex Lozowski making the conversion. Wigglesworth's replacement Ben Spencer scored a penalty on the 77th minute as the hosts succumbed to a seven-point defeat.

With Saracens managing to secure the losing bonus-point, they have provisionally scaled up to the second position in the points table while the Quins have climbed up two position up to eighth after securing their second win from four matches.

Qunis director of rugby John Kingston was full of praise for the replacements after a number of key players were unavailable. Jack Clifford is undergoing rehabilitation for an ankle injury, while Marland Yarde pulled out of the game due to throat infection.

Kingston's men were put in further trouble when they lost Joe Marler and Danny Care due to injuries during the game. However, the replacements stepped up and inflicted the first defeat on the defending champions in this season.

"Joe's a massive personality for us. Mark Lambert has been at the club a long time and he took the role seamlessly so early in the game," Kingston said.

"Karl Dickson came on when Danny had to go off after half-time when we were massively under the pump and playing into the wind. He did a such a wonderful job.

"Charlie Walker didn't get much notice that he was playing after Marland pulled out before the match.

"And then James Chisholm stepped in for Jack Clifford, who had that unfortunate injury.

"The way they all played when there was so much disruption was really positive. You expect your big players to play, but those boys stepped in and a wonderful job.

"It must have been a wonderful game to watch, two sides going at it hammer and tongs.

"I'm just so pleased for the players that they got their rewards and an injection in belief and confidence which was very important for the season ahead."