Hamilton: We will bounce back 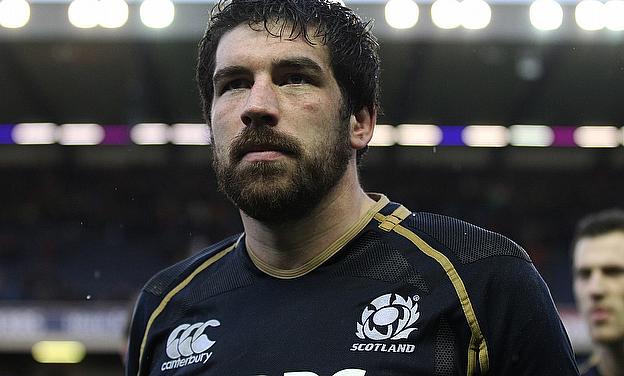 Lock Jim Hamilton insists Scotland will have no problem bouncing back from defeat in Dublin - because they have done it all before.

The Dark Blues were dismal in the Irish capital as they lost 28-6 to Ireland in their opening RBS 6 Nations defeat.

A bright start lasted until stoppage time in the first half, when Andrew Trimble crossed over to kick-start a comfortable win for the hosts.

Scotland now take on England at home on Saturday but Montpellier second-rower Hamilton says a side who have strung successive victories together just twice in the last year are used to dusting themselves down from lows and responding with winning displays.

He said: "It was the s ame old story in Dublin but now we've got to get back on the wagon. It's a short turnaround before the next game and both ourselves and England will be desperate for that win.

"There's no two ways about it, it'll be a tough game. It's always great to play at Murrayfield in the Calcutta Cup match and what positives we can take out of that game we'll try and do so.

"England lost their opening game to France but the circumstances were different.

"England were extremely unlucky not to win in Paris, whereas we were well beaten by Ireland.

"England are a formidable team, we saw that in the autumn and barring the result yesterday they're one of the form teams in the Six Nations.

"We will look at where we can improve but the score's gone now - we can't change it.

"We'll break the game down to see what went well and what didn't.

"It's a cruel sport and with Scotland over the last few years it has been tough. We're used to having disappointments but then bouncing back. We're well capable of running out a huge performance on Saturday."

Despite the wide margin of the final score at the Aviva Stadium, there were some slight glimmers of hope for Scott Johnson's side.

British and Irish Lion Stuart Hogg looked keen upon his first Scotland appearance almost a year while Duncan Weir showed signs that is moving away from his kicking-game dependency as he started at fly-half.

But even after enjoying around two-thirds of the possession in the opening half the Scots still looked like a side ready to choke whenever their big chances came.

Hamilton added: " I sound like a broken record player, but it's what it is.

"We had a lot of chances and were in their 22 a lot, but when they were there, like a lot of the top teams they took them, they smell a little bit of blood and they take it.

"That's something the backs will need to sort out and the forwards collectively because it wasn't pretty at some times."