Greg Nicholls: The player behind the doctor 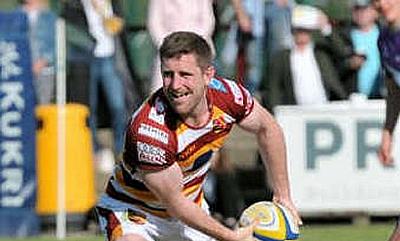 As is custom for anyone employed in a medical profession, they do an incredible job every single day of the year by working long hours and being dedicated to their jobs in order to help and aid others. Many are of course called upon regularly, but for Dr Greg Nicholls, he went beyond his call of duty last Saturday.

Nicholls was boarding a train at Preston railway station with his fellow teammates as they travelled to Richmond for a league match when he heard pleas for help. A women had collapsed on the platform and Nicholls sprang into action along with club physios Greg Littler and Megan Stewart. Nicholls, who is a paediatric surgeon at Royal Lancaster Infirmary, performed CPR and kept the women alive until paramedics arrived on the scene.

It certainly wasn’t the usual pre-match routine Nicholls has been used to over the years, but his actions, as well as those of physios Greg and Megan, can only be described as heroic.

But Nicholls is far too modest to agree with that statement. When we spoke this week, the ex-England Students player described the local media attention surrounding the events of last weekend as “surprising”, but the 32 year-old is certainly no stranger to being in the spotlight when it comes to rugby.

For all his fantastic achievements away from the field, one right at the very top of his list will be playing in the Premiership for Bristol and that stage of his life is still fresh in Nicholls’ memory.  “It was great,” he says. “I think it is like anything. If you can get to the top level of something you enjoy doing, it is always great to do that.

“Obviously, it was fantastic for me to play in the Premiership and run out at Bristol, especially because they are so passionate about their rugby down there and the club were going through interesting times back then as well so it was a great experience for me.”

Having made over 80 appearances for Bristol in the Premiership, he was part of the side that finished third in the 2006/7 season and secured a Heineken Cup place. For any player, that sort of achievement is huge although Nicholls had other things on his mind apart from just rugby.

Nicholls attended Arnold School where he played rugby throughout his first five years there and it was only before he joined the Sixth Form that he realised his involvement with the sport was starting to get serious. From the local area, he was called up to play at county level before representing the North of England and England Schools while he was still studying.

It was never an ambition of his to play senior rugby early on in his school life, but after Sixth Form and achieving his A-Levels, Nicholls found himself at a crossroads. Due to him playing rugby at a high level, clubs were sniffing around the talented scrum-half and with a medical degree also on his radar, he wanted to make sure he could combine both and continue to pursue his dreams.

That summer, after he had finished school, Nicholls had to weigh up which University could help him balance his studies and rugby. Bristol was the stand out choice.

“There were a few clubs that I had been speaking to, but Bristol had the best offer and stood out to me because I could join the both together. Bristol was the best for that and they did a fantastic job in sorting it all out for me to make sure I could strike the right balance and they valued the importance of both too.”

But it wasn’t until the first few weeks of Nicholls attending the University of Bristol that he found out that juggling his studies and rugby would be much more difficult than he thought.

“I soon realised I wasn’t going to be able to fully focus on both at the same time and give them a fair crack so from there, rugby was the decision and the University were excellent in allowing me to make that choice and keeping my place at the Uni too,” says Nicholls.

It was in the years that followed that Nicholls admits his career took off as he represented Bristol at the highest level of the domestic game, but he knew it wasn’t going to last for ever as he wanted to continue with medicine.

After leaving Bristol's first team, Nicholls returned to the books, but was still playing rugby for London Welsh and Plymouth Albion and admits it was still tough to strike the right balance.

“It was still hard to balance work with rugby because I was back at Uni and on top of that, I did have to travel down for training in London or Plymouth on Tuesday and Thursday nights and obviously playing the game on a weekend whether that be home and away,” he says.

“But again the University were good because they helped me split my course so I could get most of my work done away from the days I had training so it worked out pretty well as I could continue to study and play rugby at a high level still which is what I wanted to do.”

Nicholls went on to achieve a degree in medicine and after being involved with National Two South side Clifton, Nicholls’ close bond with the north-west of England grew stronger in 2014 when he was offered a job in Lancaster which meant he was coming home.

“At the stage I was at when applying for jobs, it was national application so I didn’t have much say in where I went and just by chance I got placed back in Blackpool. I was still interested in playing the game and still had the desire to do something alongside medicine, so it was a natural choice for me to see if I could play at a high level once again with Fylde.”

Even in full-time work, Nicholls’ hunger to play rugby at a high level burns brighter than ever and the fact he re-joined his local team Fylde, where he had played mini and juniors at before moving to Bristol, adds to his remarkable journey in the game.