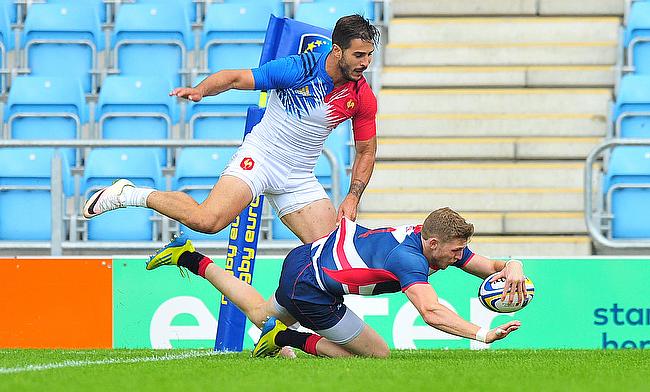 Team Great Britain continued their heavy preparations ahead of the Rio Olympics 2016 with both GB Royals and GB Lions winning the silverware in the Mitsubishi Motors Exeter Sevens.

The GB rugby team of 24-man preliminary squad was split into two teams - GB Lions and GB Royals - to have a broader look at the players, allowing the coach Simon Amor to announce the strongest 12-man squad for the mega event.

However, it was the Royals who came victorious on Sunday as they went on to defeat France in the final by 33-17 despite being 12-0 down at one stage.

GB Lions, who had a productive outing at the Sevens and the City had to exit the tournament after the quarter-final defeat to Russia. However, they managed to win the Plate final, defeating Germany by 31-19.

GB Royals were dominating from the group stage as they blanked France, Portugal and Poland with a margin of 17-0, 31-0 and 43-0 respectively and looked the best team on display. They followed it with victories over Georgia and Russia to reach the final.

Amor lauded the performances of both Lions and Royals and admitted that the selection of the final 12 for the Olympics will be a tough task.

“This is a group of guys that pretty much met six weeks ago and they have been absolutely outstanding.

“To win a trophy here is a credit to everyone that has been involved in the GB programme, I am really chuffed.

“We have some absolutely unbelievable players, there is so much talent to pick from and now we have to work out which one goes well with the other.

“They have given us some massive selection headaches and that is exactly the place we wanted to be in, so it is going to be a tough night with myself and Gareth Williams talking this through.

“The support here has been amazing, thank you so much – hearing the GB chant in the crowd was brilliant.”

Two tries a piece from Inaki Villanueva and Cesar Sempere ensured Spain a third position finish in the tournament after they defeated Russia by 17-7 while Portugal won the Bowl final defeating Belgium 31-5.