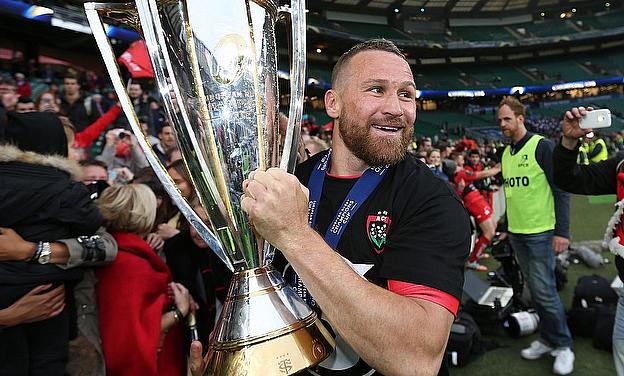 Matt Giteau has hailed the "very exciting" player rule change that could see him revive his Australia Test career at the age of 32 and be a potential World Cup thorn in England's side.

Giteau has not played international rugby since he won his 92nd cap against Samoa in 2011, halting his nine-year Wallabies adventure by agreeing a lucrative move to French giants Toulon.

In a major policy shift announced last week, though, the Australian Rugby Union decided that overseas-based players with more than 60 caps and who have held a professional ARU contract for seven years will now be available to Wallabies head coach Michael Cheika with immediate effect.

Giteau and his Toulon team-mate Drew Mitchell, whose stunning solo score confirmed a third successive European title with victory over Clermont Auvergne at Twickenham, both stand to benefit from the radical switch of stance.

And that could mean midfield playmaker Giteau being involved in plotting the World Cup downfall of both England and Wales, with all three countries drawn together in a pool of punishing proportions.

"It's very exciting for Australian rugby that they've changed that (rule)," Giteau said.

"For me, in particular, it doesn't change a great deal until I am contacted or you are selected.

"For me, I have just to play the best football I can for Toulon, because that is my club. That is my obligation.

"If, after that, I am fortunate enough to get selected - whether I am starting or just in a group of 30 - I would be just as proud to try and help the young players along and help in any way.

"The rules only changed a week ago. I signed over here (Toulon) knowing that I wouldn't play Test rugby again.

"Now the rules have changed, it's a possibility. I had no idea it was coming, but I'm happy it has.

"I have always been reasonably confident in my own ability, without being arrogant.

"It is amazing to be part of a World Cup. I was fortunate enough to play in two - one in Australia and one in France - and they are phenomenal occasions to be a part of. The World Cup is a great thing."

Given Australia's enviable back division riches provided by the likes of Israel Folau, Matt Toomua, Adam Ashley-Cooper and Joe Tomane, the possibility that Giteau and Mitchell could strengthen Cheika's options will not have gone unnoticed by England or Wales, teams that Australia meet at Twickenham in October.

Mitchell certainly left his Twickenham calling card by shredding Clermont's defence as the clock ticked down on a pulsating final that went Toulon's way, 24-18.

"I am a bit biased, because he (Mitchell) is my best mate, and to see him do something so special was amazing," Giteau added.

"For me, he always performs on the big stage.

"It's not for me to say if he should be selected or not, but I would think he's in the top 30 players in Australia. That would be my opinion.

"But we are not selectors, we just go out there, play the best we can and then see what happens."

Cheika could conceivably decide that Giteau and Mitchell will be on his radar for this year's Rugby championship opener against South Africa in Brisbane on July 18.

In the meantime, though, Giteau will happily reflect on Toulon's European title hat-trick as they joined Toulouse and Leinster as three-time champions.

"I am not generally an emotional person on the field, but when we won there was a lot of emotion that came over me. It felt good, and it meant a lot to win that one," he said.

"You play for your town and your region, but you also play for your team-mates, and we've got some great players, some international players, that you don't want to let down.

"The club has recruited the right guys that have come here with the right attitude, wanting to win things, and we've been fortunate enough to do that."