George North - Life In the Premiership 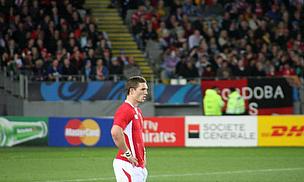 Over a summer that had far more movement and exciting signings than we have been treated to in recent years, one signing stood out. In some quarters it took a side from odds on for a top four finishers, to favourites for the title. I am of course talking about that wonderful Welsh winger, George North. We were treated over the summer to some of his best moments as he and the rest of the pride restored some respect to the Lions shirt. The finger wag as he first breached the Australian whitewash was naughty, but appropriate for a man of his talent. To then go head to head with Israel Folau, already one of the best wingers in the world, and turn his attempt at a tackle into a moment of equal parts magic and comedy, says it all. Put all that aside though, how well has North settled into the Aviva Premiership? How much of an impact has he made on Northampton’s fortunes?

One try from five games is not the return that he may have wanted; he has also been over shadowed by the form of fellow wing Jamie Elliott. Perhaps we expected too much of the Welsh sensation, he is after all still just twenty one years old; he’s playing with a new club in a new country, in a new league. The differences between the Aviva Premiership and Rabo Direct are huge; the Premiership has a culture of survival at all costs, it is organised and results driven thanks to the threat of relegation, and only the top six qualify for the Heineken Cup. The Rabo Direct offers teams more time, more space to breathe and so they can think about style. As a result North would have enjoyed a more free flowing game and potentially greater opportunities.

The important thing for Northampton will be that North capitalises on the opportunities when they do come his way. The Saints game away to Gloucester highlights this; he was kept quiet for most of the game as Charlie Sharples closed him down and used the touchline to his advantage. They kicked in behind him forcing him to turn, chased hard, so when he turned to face up the pitch again he was faced by an unbroken defensive line. Then a kick went into North’s bucket hands, Jonny May was isolated chasing and North had his chance. He capitalised on the opportunity and left three defenders in his wake before brushing off a fourth tackle and offloading to keep the move going, resulting in a fantastic try. He again took his opportunity against Sale, albeit a far easier one given to him by Jamie Elliott that opened his try scoring account for Northampton.

The width of Leicester’s pitch doesn’t give the wingers on show much space to show a defence their heels. North however did make himself a nuisance, stepping inside the winger. In doing so he took the touch line out of the equation, and forced the inside defender to commit. It was noticeable that Allen often drifted out and combined with his wingers to bring North down. While North himself offered little threat, it resulted in Leicester spreading wide and thin. This is the value of North. Such is his size, power, pace and reputation that he will influence every game he plays.

I would however put forward to you a strong argument that North so far has not been anywhere near as effective as he is in a Wales shirt. The absence of play maker, Jonathan Davies, inside of him is telling. It’s too easy at the moment for the defence to close him down before he builds up a head of steam. To truly get the best out of him the Saints may want to look at a more balanced midfield than Burrell and Pisi. I’d also like to see more of the big man running through the midfield, off the nine or ten. Off set piece I think it would be worth standing him at first receiver and giving him the ball, no bluffing, just give North the ball with the forwards bogged down by the set piece and let him run at the poor isolated half back.

Northampton cannot expect miracles from North, they need to give him half a chance, a yard of space, mismatches and then he will shine. Right now, either as a consequence of Saints still adapting to how best to use him, or North not settling in, he has not been at his best. He should take confidence from the Six Nations though and will likely come back to the Premiership re-energised for the harder summer grounds.