Fylde welcome the Students to the Woodlands 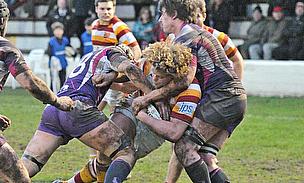 Fylde look to get back to winning ways when they welcome Loughborough Students to the Woodlands on Saturday (ko 3pm) in what has traditionally been one of the most exciting and attacking of the season's fixtures in National One.

Fylde coaches & players will have spent little time licking their collective wounds after a gut wrenching, late 28-29 defeat at Esher after leading for virtually all of the game. The Claret & Golds were five minutes from winning their first ever match at Molesey Road in 6 attempts. However, the players gave everything and will do so again at Fortress Woodlands against Loughborough Students. This will be far from easy as the Students' 14th place in National One is a rather misleading one. They have lost all four matches to date, relatively narrowly, but have come up against leading clubs Ealing Trailfinders (10-22), Coventry (27-30), Rosslyn Park (27-36) & Blackheath (19-29). They have asked searching questions of all four clubs and no doubt will do so against Fylde currently sitting in 4th place..

One of the almost inevitable problems in running an elite students team in the National Leagues is getting consistency of selection and performance. Representative calls – U'20s, England Students etc – usually takes away a small clutch of players after Christmas whilst other calls on their time, including academic ones, also reduces the availability of some 1st choice players. But Loughborough demonstrate consistency and solidity, running a large group of talented players and always proving competitive. They did struggle a little last season but pulled themselves around to finish in 12th place in the division.

Although Fylde & Loughborough have had fixtures going back many years, there have been just ten games between them since the National Leagues became established. The results balance sheet between the two clubs is even, with five victories each.

Loughborough University is an elite centre for sport and has always produced great rugby players under its previous manifestation as Loughborough College. Overall, Loughborough have almost certainly the best university squad in the UK in terms of depth although their BUCS1 squad (their
2nd team) have not been quite so dominating in the last couple of seasons.

As well as the British Universities competition which includes the other major rugby playing institutions, Loughborough decided to enter the RFU league system a few years ago. Given that they attract some of the very best young rugby talent in the UK then it's hardly surprising that they have worked their way from regional competitions up to the national leagues. What is more astonishing - given the nature of student terms, the three-year turnover of student cohorts, the fact that unlike almost every club in the National Leagues they don't pay players, and the solid nine months length of the season - has been their ability to maintain a successful team in these leagues each season.

But somehow they manage it, unlike almost any other UK university team, and have done so with great style. Hartpury College is the new kid on the block in National League terms and are following in Loughborough's footsteps by being promoted to N1 this season. By 4.45 on 11th October Fylde will be in a very good place to judge the respective merits of the two squads as they will have played both in 8 days.

The participation of university teams like these in the RFU league structure is somewhat controversial but in anyone's terms they certainly bring something different to the National Leagues. Some believe that Loughborough have clear designs on RFU Championship status and they may well press this case on the pitch in the coming seasons.

Loughborough Students have a number of great advantages over other N1 clubs. They have superb facilities, access to some of the very best coaching around and a back-up team of physiologists,
nutritionists, conditioning coaches, and, most importantly, an unsurpassed elite sporting culture. They also have a squad of more or less full-time players, give or take a little studying at the periphery! Their National League opponents have come across a squad of young players in great physical shape and many with the natural talent to go to the top of the professional game.

Long standing lead coach, now Director of Rugby, Dave Morris, is assisted by two new coaches, former international players England hooker George Chuter and Scotland Seven’s scrum half Ciaran Beattie. Their playing squad includes a number of young players who are likely to achieve a professional rugby career. The nature of the student experience is the continually moving escalator which is the three year degree course. Good players leave and are replaced by fresh talent. This is an open club, that is they can admit any player, whether a student at the University or not, although the great majority are studying there.

With due respects to a very strong Loughborough squad, the star player is almost certainly a World Cup winner! Henry Taylor is an exceptional talent and was one of the England U'20s stars in their brilliant & successful Junior World Cup campaign in the summer. The former Harlequins & Richmond scrum-half has recently signed for Saracens. Other accomplished backs include fullback Jack Pons (formerly a 1st team regular at Moseley & Birmingham/Solihull), centres Jack Bradford (formerly Nottingham, Leicester Lions & Scotland U'20s), Jack Wardle & Rhys Owen (ex-Bromsgrove).