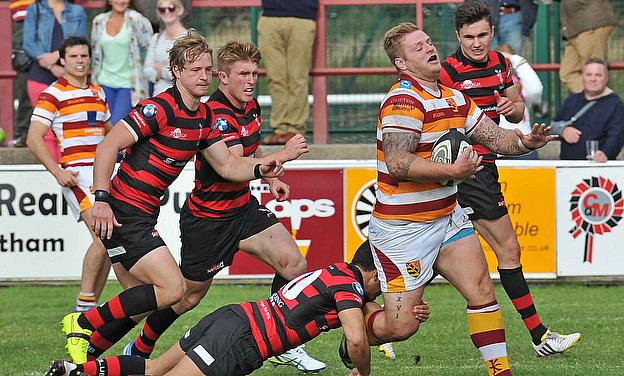 In a mixed performance by both teams, Fylde deservedly came out on top after a considerable struggle to subdue an obdurate Blackheath squad in the opening game of the 2014-15 season. Fylde led by 14-9 at half-time but fell behind for the first time in the opening minutes of the 2nd half when Club scored a converted try. But Fylde upped their game with two excellent tries to take the bonus point spoils.

The afternoon was sunny and conditions at the Woodlands were perfect for running rugby and, to their credit, both teams tried to exploit these. Blackheath kicked off but a mixed afternoon for young, late stand-in fly-half Tom Carlisle started when he booted the ball dead. Back came everyone to the centre for a scrummage. Fylde were penalised in the 4th minute but some 'afters' by Club flanker Dave Allen saw the decision reversed and off he jogged to the sinbin.

Referee David Proctor was clearly in a no nonsense mood as four minutes later he balanced up matters by carding Fylde debutant no 8 David Fairbrother for a high tackle. Carlisle missed the relatively straightforward penalty attempt that followed.

Fylde pressed deep in Blackheath territory and as they attacked down the left a long miss pass by fly-half Chris Johnson meant for winger Oli Brennand was plucked out of the air by a Club player who had an empty 80m ahead of him. But the referee brought everyone back for offside 10m out from the Blackheath line. Warren Spragg took a quick tap penalty with the visitors defence unprepared and lock Gareth Rawlings strolled over for a simple try. Johnson converted easily for a 7-0 lead.

Blackheath came back strongly and in the 15th minute sustained re-cycling of the ball resulted in an infringement by a Fylde player in a kickable position. Carlisle converted this to reduce the defict to 3-7.

The visitors continued to press and a sweeping attack right looked odds on to result in a try through Club's backline. Somehow, a desperate Fylde tackle saved the day as skipperEvan Stewart was receiving treatment in midfield with what initially looked a worrying leg injury. The Ulsterman got to his feet eventually and rejoined the fray before being replaced by Paul Arnold on the half hour.

But before this, in the 25th minute, Fylde kicked a penalty deep inside the Club half. From the ensuing lineout won by Fairbrother, a clever move saw Gareth Rawlings peel away down the blindside before feeding the ball back to hooker Tom Burtonwood who scored in the left corner. Johnson kicked an excellent conversion from the touchline to take the score to 14-3.

Fylde indiscipline just before half-time led to Carlisle kicking another penalty to reduce the arrears. Then, deep in injury time, Club looked certain to score as they pressed on the Fylde line. Prop Dan Birchall was adjudged to have offended at the ruck and received his marching orders. One last attempt by Club to find a way through a determined home defence was stopped illegally and Carlisle kicked his third penalty to reduce the deficit to 9-14.

Immediately after the interval Fylde attacked fast down the middle but atypically poor handling, not for the first or last time in the game, saw the ball spilled. Blackheath took due advantage as they sythed down the left with men to spare and a vacant Fylde defence. Debut centre Ollie Evans raced clear and touched down under the posts. Carlisle kicked the conversion and suddenly Club had a 16-14 lead and were looking very chirpy.

But Fylde steadied the ship and raised the intensity and accuracy of their game. Debutant centre Scott Rawlings is a big, hard running centre and on his debut for his new club made serious inroads into the Club defensive cover with some barnstorming runs. From one attack, a Blackheath player offended and Johnson kicked an easy conversion to edge his side into a 17-16 lead.

The crucial moment of the game came in the 60th minute. Blackheath attacked dangerously 30m out from the Fylde line. The ball was stripped away from the attacker and Fylde scrum-half Ryan De La Harpe burst away downfield. He was eventually tackled 35m out from the Blackheath line but great support play from hooker Burtonwood saw him link with Chris Johnson who slipped through a gap in the visitor's defence to race away to score under the posts. His conversion extended the lead to 24-16.

Then followed a period of end-to-end rugby as each team moved the ball around creatively if not always accurately. A slashing Club attack to within 10m of the Fylde line looked likely to result in a score but once again desperate home defence denied them. It was Fylde's turn to break out but, following a fine burst by centre Chris Briers, a fast supporting Oli Brennand couldn't hold on to the pass and the chance was lost.

But Brennand was to get his revenge minutes later. In the 72nd minute a fine rolling maul drove towards the Blackheath line before Paul Arnold broke off the side and slipped a neat pass to Oli Brennand who finished off by touching down athletically in the very left corner for the 4th try bonus point. Once again Chris Johnson converted beautifully from the touchline for a 31-16 advantage.

There was just time for a few more attacks from the visitors as they tried to rescue at least a losing bonus point. Arnold offended at a ruck and was Fylde's 3rd yellow carded player. It had no effect on the score as the referee blew the final whistle shortly afterwards.

There was one interesting innovation at National One level which was demonstrated in this opening game, the use of rolling replacements. Each side is allowed ten interchanges of players during the game. This has been trialled in the County Championship in the past two or three seasons and Lancashire Head Coach Mark Nelson has considerable experience in its use. It showed in this game as he deployed his 20 players cleverly, bringing them on and off to rest injuries and introduce new energy off the bench. The downside, to this reporter at least, is the sense of discontinuity to the spectacle, with players coming on and off more frequently than we've been used to in the past. But like it or loath it, it can be used to telling tactical effect.

The Fylde pack worked hard throughout to match a competitive Blackheath eight. All action no 8 David Fairbrother had a fine allround game and looks a real find for the Woodlands club. If the Fylde backline didn't have its smothest afternoon, they created sufficient danger to threaten on numerous occasions. Scott Rawlings earned the Head Coach's nomination for Fylde's man of the match. It was perhaps the quality of Fylde's defence that was most notable in the home side's performance. There's much to work on in training if this good start to another National One campaign is to be built on as a trip to NW rivals Macclesfield awaits next Saturday followed by the visit of promotion favourites Rosslyn Park to the Woodlands on 20th September.