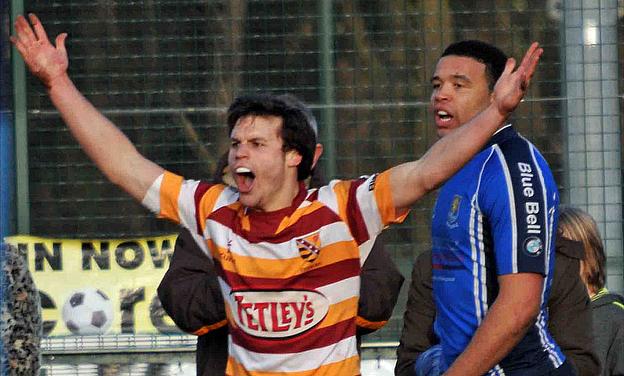 This North West derby was a rather one sided affair as the final score demonstrates but not in all respects. Macclesfield had about as much possession as Fylde but could make little of it. In contradistinction, the visitors looked like scoring every time they attacked through clever running lines, slick handling and combination play between backs and forwards.

The Cheshire club's well appointed Priory Park ground looked in fine condition on a dry, cloudy early autumn day made for running rugby. A strong representation of Fylde supporters gave their side much encouragement as they took to the field. Under a new coaching team, the Blues are looking to re-establish themselves back in National One after a tremendous promotion campaign last season. With a number of current injuries to front five forwards such as Dave Marwick, Dean Williams & Tom Mantell, this is proving taxing.

An early turnover gained by Macclesfield suggested that Fylde would not have this all their own way. But in the 4th minute fullback Warren Spragg made a coruscating break downfield. Support runners were at his side and they provided a swift link to right winger Jordan Dorrington who finished off near the posts from 10m out. Chris Johnson converted easily for a 0-7 lead.

The Blues responded with a number of attacks and a period of sustained possession. They won a scrum 20m out from Fylde line but visitors pack drove the Macc eight backwards and won a penalty. As always, the visitors took a quick 'tap & go' but the ball went into touch as the backs passing went awry.

What proved to be the only sour moment of the game for Fylde occurred in the 10th minute when their indestructible loose head prop Dan Birchall received prolonged treatment for a worrying ankle injury. He was helped off and Simon Griffiths replaced him. Birchall has been an ever present in the Fylde line-up in the two and a bit seasons since joining from Sedgley Tigers, an unbroken sequence of 62 matches.

Fylde were soon back in their stride as scrum-half Ryan De La Harpe raced 40m down field into the right corner but his pass to Dorrington 10m from the try line was blocked by a Macc defender. In the 16th minute Chris Johnson launched a steepling kick to the right corner from 35m out. It was almost inch perfect as Jordan Dorrington chased it and somehow stretching well forward caught it miraculously just short of the line before, on his knees, grounding the ball over the line. It was a superb piece of opportunism by the young winger-cum-scrumhalf. Johnson compounded his excellence with a successful conversion kick from wide out on the right and a 0-14 lead.

The Macc forwards were working a hard shift and centre Ollie Fewtrell was prominent in his debut appearance. The Blues attacked down their right and just as they looked like getting over the whitewash in the corner Oli Brennand managed to block the final pass and the chance was lost. Fylde immediately went the length of pitch in the 21st minute and with clever handling down the blind side Scott Rawlings barged his way over in the left corner for his first try for the Woodlands club.  Chris Johnson kicked a lovely conversion from the touchline as chasing Macc winger Josh Fowles was inches away from charging it down. Johnson is certainly a cool & unflappable character.

Warren Spragg was having a fine game and revelled in the space available at fullback. Another long breakout from him threatened the Macc line but good tackling saved the home side.

Each time Fylde scored, a game Macclesfield came back hard at their opponents. As they pressed in the final five minutes of the 1st half, Fylde committed a series of offences and were duly punished by referee Jamie Leahy. Skipper & fly-half Eaton kicked for the corner and Macc drove their famous rolling mauls towards the Fylde line. Another penalty followed and this time the fierce defence from the visitors, which didn't buckle all afternoon, forced a Blues knock-on.

From the subsequent scrummage Fylde worked the ball down field swiftly and in the 34th minute, from a series of phases inside the Blues' half, centre Chris Briers stepped and swerved through a couple of powder puff tackles from 35m out to score under the posts, his side's 4th and bonus point try. Johnson converted for a half-time score of 0-28.

If the result of the game had been effectively decided by such an interval score, it didn't make the heads of the home players drop. It took the Blues rather longer to emerge from the dressing room for the 2nd period so maybe the words of Head Coach Giles Heagerty were ringing in their ears. Macc restarted with some forcible rugby whilst still not having sufficient penetration to break open the Fylde defence. A powerful Blues maul on halfway was brought down illegally and Eaton kicked for the corner. Once more they were unable to profit from such good field position as the visitors defence repelled another attack.

When Fylde regained possession in the 43rd minute they pressed deep in the Macc half. They moved the ball right and superb, quick handling gave winger Dorrington just enough space to touch down neatly in the corner for his hat-trick try. This talented  & versatile young man is rated highly by the Fylde coaching staff and today he proved convincingly that he can thrive in such National One company. This looked like his coming of age at National League level.

Chris Johnson has been at the top of his goal kicking form in this early season. Eight successive successful conversions, many from wide out on the touchline, has amply demonstrated this. But even 'Jonno' is human and his attempted conversion kick from the right touchline on this occasion drifted just wide and a 0-33 advantage.

The Blues came back strongly and battered away at the Fylde line. They recycled the ball time and again but could find no way through the defence. When Fylde regained possession they were prevented by an offence by a Macc forward who was sinbinned for his trouble. The visitors immediately launched a length of the pitch break out. Replacement centre Tommy Banks picked a lovely line and weaved his way 40m to close to the Macc whitewash. His team mates supported quickly and Oli Brennand was worked into the left corner for Fylde's sixth try and his 172nd on his 200th appearance for his home town club. This time Johnson corrected his radar and he slotted the conversion over from the touchline for a 0-40 scoreline.

By this stage Fylde Head Coach Mark Nelson was ringing the changes and using his full bench of players on rotation. Paul Arnold was introduced for his first action and Scott Rawlings reappeared to add his own brand of muscularity to the backline. Scrum-half De La Harpe gave way to Rawlings as Dorrington shifted to scrum-half.

Another slashing Fylde attack in the 64th minute down the right ended with Spragg breaking the Blues defensive line once again to race in from 35m out to score to the right of the posts. Johnson converted for a 0-47 lead – and there were still 15 minutes left to play!

Still, the Blues came back and once again camped inside the Fylde 22m line. They earned a penalty and kicked for the corner. Surely, their useful driving maul would at last prevail to get them on the score sheet. Yet again, even with such a large lead, Fylde were in no mood to concede and they battled as if their lives depended on it to repulse the home side.

Play was now rather error strewn by both sides as tiredness crept in. There was time for Fylde to run the ball from deep again as Spragg stretched his legs in a 40m break. He was caught by a desperate tackle which prevented what looked a certain 8th try.

There was time left for another Macc attack but this floundered as all the others on the visitors defensive rock. The Blues deserved to score for all their hard work, sweat & tears but it was not to be as the final whistle sounded.

The score was a rather harsh summation of an afternoon's hard work by the Blues. With players returning from injury they will hope to pick themselves up from two early defeats and consolidate in the division.

For Fylde, it was noticeable that the pack looks much stronger than last season with the recruitment of Gareth Rawlings & David Fairbrother who have added power and skill to the back five. Another plus was that Sam Beaumont lasted the whole game on his return from injury. Apart from the exceptional contribution from Dorrington, this reporter's man of the match in an all round Fylde team performance was former Macc skipper & current Fylde captain Evan Stewart. The Ulsterman was everywhere, always competing fiercely in the rucks and tackling his heart out. He gave so much to the outstanding defensive effort of his side.

After the game, Head Coach Mark Nelson was understandably chirpy about the performance of his charges. But he's far from complacent as he looked towards the next two very tough challenges – promotion favourites Rosslyn Park next Saturday at the Woodlands and then a long trip to Esher a week later. Contemplating injured and unavailable players in this context after two maximum points victories he said “The honeymoon is over!”

For the stats nerds, this was Fylde's biggest win since their return to National One in 2011, going back 92 matches since they beat Hull Ionians by 76-14 at the Woodlands in April 2011.