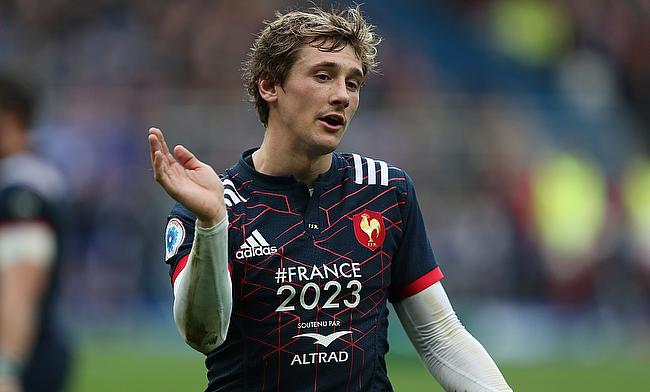 Baptiste Serin was one of the try-scorer for France
©PA

France registered their second consecutive win in the ongoing Rugby World Cup after they completed a 33-9 bonus point victory over the United States of America at Fukuoka Hakatanomori Stadium on Wednesday.

The win also meant France have consolidated their second place in Pool C with nine points while USA are at the bottom of the table after suffering their second defeat.

The first half saw both the teams competing hard with each other as France had a 12-6 lead but Jacques Brunel's men were dominant after the break when they scored three tries to complete a 33-9 win.

France got the better of the start with Yoann Huget capitalising on a chip kick from Camille Lopez to score the opening try in the 6th minute and Thomas Ramos kicked the conversion to make it 7-0.

AJ MacGinty kicked a penalty goal in the 19th minute to reduce the gap between the two teams to four points but France went on to get their second try this time from Alivereti Raka following a crossfield kick from Lopez. A second penalty kick from MacGinty the teams headed into the break with a 12-6 scoreline.

France continued to exert pressure at the start of the second half but could not translate them to points. In the 50th minute they thought they extended their lead when Raka crossed the whitewash but was denied by the referee as Sofiane Guitoune had a forward pass in the build up.

By the 65th minute, MacGinty kicked another penalty goal to narrow down the gap to just three points but France dominated the final 15 minutes with tries from Gael Fickou (67'), Baptiste Serin (70') and Jefferson Poirot (79'). Lopez kicked all the three conversions to ensure the Les Bleus completed a 24 point victory.

France will face Tonga and England in the remainder of the opening round while USA have games against Argentina and Tonga.

?? "They stuck in there and they gave us a big surprise"@francerugby ace Bernard Le Roux reflects on a challenging match against @USARugby in #RWCFukuoka #RWC2019 #FRAvUSA pic.twitter.com/nrjhHfz2yh

He ran the show for @FranceRugby with three try assists, to become the @Mastercard Player of the Match for #FRAvUSA, congratulations to Camille Lopez! #POTM #StartSomethingPriceless #RWC2019 pic.twitter.com/XLX0hnztIf