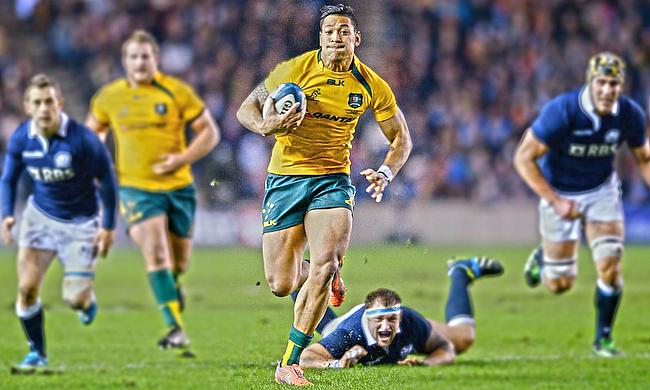 Israel Folau was in great form throughout the RWC
©PA

There aren’t too many constants in the world of rugby union, but one is that when Israel Folau gets his hands on the ball, good things tend to happen.

Since Folau’s move to union from Greater Western Sydney in the Australian Football League, he has rapidly developed into one of the most explosive and dynamic players in the sport.

There have obviously been minor speed bumps in the road, particularly in terms of defensive positioning, but his transition has generally been as seamless as you could hope for. His aerial ability and attacking instincts made him an instant hit at full-back and he has enjoyed real success at the position, going on to make 38 appearances for the Wallabies over the last two and a half years.

However, that ability to make things happen whenever he gets his hands on the ball has prompted a desire in Folau to move into the midfield, in an effort to have an even larger impact on the game.

Folau had hoped to make the switch during the 2014 Super Rugby season, but Michael Cheika and Daryl Gibson, his then coaches at the Waratahs, opted against it. The full-back then reiterated his feelings ahead of the 2015 Super Rugby season, claiming the positional move would allow him to impact the game more in both attack and defence.

“I'm usually out in those wider channels getting the ball and maybe just finishing off the plays, whereas I want to get a bit closer, get my hands on the ball and get a second touch so I can add that on to what I can do out wide," said Folau to Fairfax Media earlier this year.

Folau continued at 15 for the Waratahs this year, although it was noticeable how often Folau would step in as first or second receiver, looking to bring his dynamism to the more confined regions of the midfield.

Gibson, who is now in sole charge of the Waratahs, seems to have been encouraged by what he saw from Folau in those moments and is now much more open to moving the superstar to the outside centre berth, a position which has been vacated by Adam Ashley-Cooper (now with Bordeaux-Bègles).

Speaking to Sky Sports Radio, Gibson stated that he believes Folau is now ready for the positional switch and praised his improvements since making the transition to union.

“After three years and with the experience he has gained in our sport he is feeling very comfortable in terms of positioning with what he was in league.”

Any concerns over Folau’s ability to adapt defensively to the new position were quickly swatted aside by Waratahs defence coach, Nathan Grey. Grey, who knows the demands of playing in the midfield intimately having spent the majority of his union career playing there, acknowledged that it would be a process and take time, but also that Folau is more than ready for it.

“Without a doubt, he’s comfortable in that front line. There’s some nuances you’ve definitely got to pick up and he’s been working with Adam and with other excellent defenders for a number of years.”

“So it’s just a matter of making that decision and upskilling from there,” Grey told the Australian Associated Press.

Grey also mentioned that if Folau does make the move, rugby league convert Reece Robinson could fill the void created at full-back.

With the Rugby World Cup fresh in the memory, there should be no underestimation of the defensive demands on centres. South Africa found a potent attacking force in Damian de Allende and Jesse Kriel but the defensive balance faltered, whilst the less said about the Sam Burgess fiasco, the better.

It’s a position – inside or outside centre – which requires as much understanding and awareness as it does physical ability and ball skills. There’s no doubt that Folau has the ability to develop into a premiere force at 13 and there are few coaches as equipped to help him through that transition as Gibson and Grey.