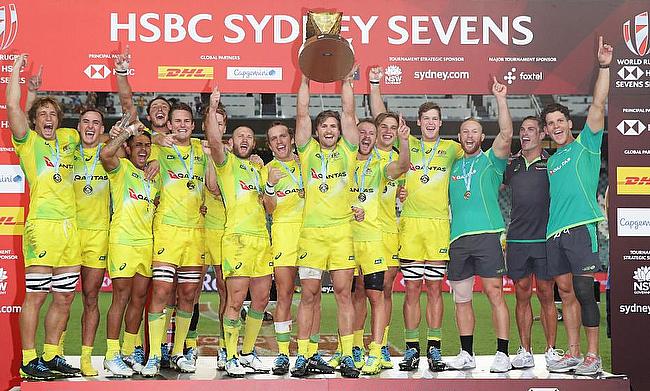 A dominating performance from Australia saw them blank South Africa 0-29 at Allianz Stadium on Sunday to clinch the Sydney leg of the World Rugby Sevens Series.

Australia, who topped Pool D with three consecutive wins defeated New Zealand 24-12 in the quarter-final and routed Argentina 28-0 in the semi-final to make it to the final game.

Meanwhile, South Africa, the toppers of Pool C registered comfortable wins over Kenya and USA in the knock-out stages to set up the final with host Australia.

Lewis Holland scored the opening try for Australia in the final against South Africa while James Stannard crossed over at the stroke of half time to increase the lead to 14-0. The third try came through John Porch as he charged following an offload from James Stannard as Australia increased their lead to 19 points while Ben O'Donnell scored a double to seal off the 0-29 victory.

The win has taken Australia to the third position in the World Rugby Sevens Series behind South Africa (winner of Dubai 7s) and New Zealand (winner of Cape Town 7s).

Lachlan Anderson, an emerging talent within the team, was voted HSBC Player of the Final and was naturally delighted with the result after the full time whistle.

“It is still hard to take it in and it is pretty special, but we have been talking about this for a long time," he said. “We started the work last July and drew a line in the sand as we hadn’t won for a while. We put the pieces in place and its great that we got the reward this weekend

Meanwhile, France went on to win the Challenge Final after they went on to beat Wales 12-29 in the final.