Exeter and Cardiff make it two on the bounce 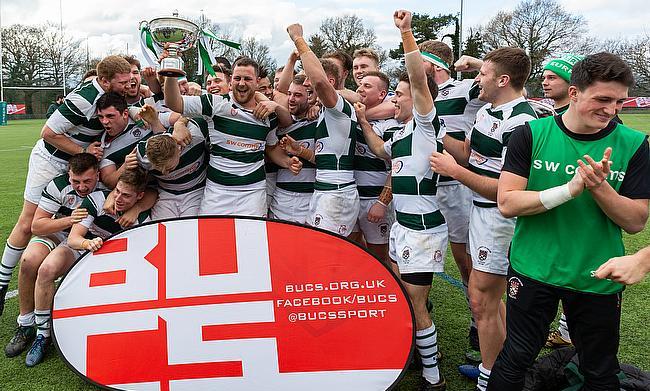 The University of Exeter and Cardiff University claimed their second victories in a row as BUCS Super Rugby entered Round Two.

The aforementioned University of Bath lost to Durham University at Rosslyn Park whilst BUCS Super Rugby Championship holders Hartpury recovered from their Round One defeat against Cardiff to beat Swansea in South Wales.

Below is a round-up of all the BUCS Super Rugby action plus, we review the results from some of our selected BUCS divisions.

Charlie Davies came off the bench to score a hat-trick whilst Matt Johnson grabbed a brace for the Green and Whites.

A classy performance from Exeter in Round 2 of @BUCSSuperRugby, as they run in 8 tries here at Topsham.
Cutbill and Schroter supreme in defence, with Chopper securing a hattrick from the subs bench.#EXECDM #bucssuperrugby

Arthur Relton and Paul Schroter also crossed for Exeter, with Harry Bazalgette kicking 22 points in an excellent performance at Topsham.

Cardiff Met trailed 27-10 at the break thanks to a try from Harrison Button and his second score combined with Oliver Andrews’ effort, did reduce the deficit to three points.

However, Exeter raced clear to continue their flying start to the new season.

Cardiff University made it two wins in a row to begin the BUCS Super Rugby campaign thanks to a victory over Northumbria.

Cardiff kicked off their season with a superb win against Hartpury and in their first home game of the term, the Welsh university were able to clinch back-to-back wins.

The hosts led 19-10 at half-time with scrum-half Josh Oakley getting on the scoresheet as Cardiff responded to two Northumbria tries.

George Thomas dived over for the bonus-point score in the second period for Cardiff and a penalty from the fly-half wrapped up the win at Llanrumney.

Hartpury earned their first BUCS Super Rugby win of the season as the champions came from behind to defeat newly-promoted Swansea.

Brandon Wood scored arguably the quickest try in BUCS Super Rugby history to give the Swans an early lead, but Hartpury produced an instant response to level things up.

Both sides then swapped penalties and despite Gwyn Parks landing a second kick for Swansea, Hartpury went over for another try to take the lead. However, it was Swansea who held the advantage at half-time as Cai Davies pounced on a loose ball to put the hosts in front.

A yellow card at the beginning of the second period had Swansea on the back foot and Hartpury capitalised as a driving maul resulted in a penalty try.

The home side tried to heap the pressure on Hartpury but in the end, the three-time BUCS Super Rugby champions held on to the victory in South Wales.

Durham University began their BUCS Super Rugby season with an excellent victory over the University of Bath at Rosslyn Park.

The Palatinate were down to 13-men either side of half-time after yellow cards were shown to Ben Osuntokun and Jack Hill.

Tries from Fred Davies and Scott Bowerman helped build a 15-5 Durham lead after Luca Mignot had opened the scoring for Bath.

How was that win at Rosslyn Park?

The Blue and Golds did hit back to score their second try just before half-time as they exploited their two-man advantage, but Nathan Wyman slotted over a penalty to give Durham an eight-point advantage.

The first points of the second period came on 68 minutes as Ben Morris kicked a penalty, but Durham increased their lead when they were awarded a penalty try.

Bath did grab a late try through Sam Kennaugh but Durham had done enough to clinch their opening victory.

Also, a mention to Leeds Beckett University who defeated the University of Leeds 25-16 in their annual Varsity match at Emerald Headingley.

The University of Edinburgh kicked off the Men’s Premier 1 North section with a fine 35-14 victory against Newcastle University. Newcastle had reached the BUCS Super Rugby play-off back in April, but have now begun another season in the second tier with a defeat.

Nottingham Trent University, who were relegated from BUCS Super Rugby last term, began life in Men’s Premier 1 with a narrow 29-27 win over city rivals the University of Nottingham. Meanwhile, the University of Birmingham beat Durham 2nds 15-7 in the North-East.

In the South side of the league, the University of Bristol claimed an excellent 37-19 win over Bath 2nds whilst Cardiff 2nds beat near neighbours Cardiff Met 2nds 49-31 and Hartpury 2nds won 24-19 against Exeter 2nds.

Last year’s champions, the University of Aberdeen, kicked off the defence of their title with a 32-24 win over Edinburgh 2nds in Scottish Tier 1 whilst the University of Sterling edged past Glasgow 2nds 20-17.

Durham 3rds have their Northern Tier 1 campaign up and running as they beat North-East rivals Northumbria 2nds 21-17 whilst the University of Liverpool began the season against newly-promoted Doncaster and the Merseysiders started with a 39-19 win.

There was only one fixture in Midlands Tier 1 this week, but it proved to be an outstanding result for Loughborough 3rds who thrashed Birmingham 2nds 75-0.

There were two away victories to begin the new Western Tier 1 season as both Exeter 4ths and Cardiff Met 3rds triumphed on their travels. Cardiff beat the University of Plymouth 34-19 whilst Exeter’s success came against the University of Southampton as they won 47-35.