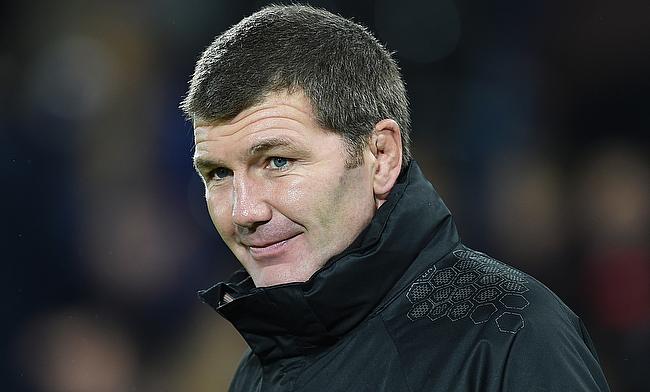 Exeter coach Rob Baxter believes his team needs to be at their best to overhaul Wasps when the two sides meet each other in the semi-final of Aviva Premiership at Sandy Park on Saturday.

After scoring 74 points in 22 games, Exeter have managed to finish second in this season, which secured them a home semi-final against Dai Young's Wasps.

Baxter joined Exeter in 2009 and in his very first season the club clinched the RFU Championship which promoted them to Aviva Premiership.

This will also be the first semi-final appearance for Exeter in the Premiership Rugby history and a win here will be a remarkable achievement for Baxter in his bid to win the championship.

Exeter hold the psychological advantage over Wasps after defeating them both the times in the group stage but Baxter has warned his team of complacency.

"It is the usual emotions before a big game - a bit nervous, a bit edgy, but excited at the same time," Baxter said.

"The lads are ready to crack on. Training is getting in the way a little bit, which is a good thing in a lot of ways.

"It is about making sure that by the time Friday comes around, we are emotionally pretty much bang on, and then ready to turn up and put in what should be our best performance of the season if we want to get anything out of the game.

"We have got a good record here (at Sandy Park). It is great to be in front of our own supporters, but the truth is that home records don't mean anything if you don't turn up, get on with the game and play very well."

Exeter have the momentum on their end after trouncing Harlequins 62-24 in their final game of the group stage while Wasps are coming off a 38-12 victory over London Irish.

With both the teams desperate for a victory on Saturday, Baxter believes nothing short of a "cracking game."

"We have been good the last couple of weeks," Baxter added. "The big focus for me is just making sure we are ready to work as hard as we have been.

"In theory, it is the biggest game of all of them this season (against Wasps). Both ourselves and Wasps have worked extremely hard this season to get here, and I can't imagine either of us want to give it up without a real fight.

"We both had a week off last week. There are not going to be any excuses. It should be a cracking game.

"We've won some big games before. Dai (Wasps rugby director Dai Young) has said the same thing, he wants to see the best of Wasps, and what I want to see is the best of Exeter."

The former lock also urged the team to stick to their game-plan and believes whichever team manages to execute their plan to perfection will have the upper hand on Saturday.

"Both ourselves and Wasps probably know a fair bit about each other's game-plan, so really there is the opportunity to bring in the odd little thing, and I think both of us will do that," Baxter said.

"But also, it is about us both trying to make the best of what we've got and the way we play, and not trying to find magic answers. A lot of the time in a game of rugby, there aren't too many magical answers.

"The reality is that over 80 minutes, you probably have to win the work-rate battle and the physicality battle first and foremost.

"We will both be aiming to do that, and I think that ultimately is going to be the key - the energy and enthusiasm about the physical contest is what's going to decide the game.

"If it's tight - and I imagine a game between two good sides will be close for quite a while - a lot of the time, it is the team that breaks first and decides it has to try something a little bit different or just gets away from their plan that makes mistakes.

"When it has been tight these last couple of weeks, we've stuck at things."