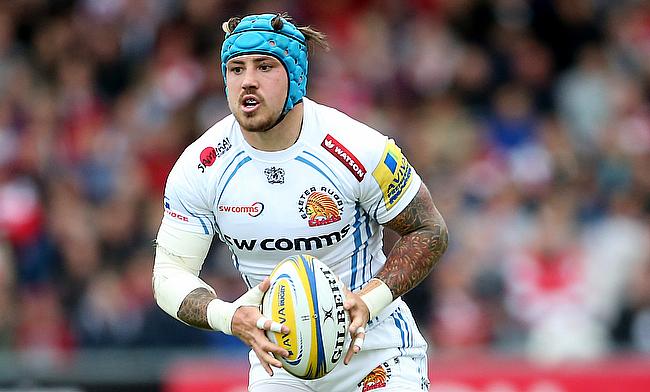 Jack Nowell scored a double coming off the bench
©PA

Exeter Chiefs have secured a play-off spot and are on a brink of a home semi-final as they went on to beat Gloucester Rugby 46-10 in their Aviva Premiership clash on Sunday.

They now have 70 points and are eight points above second-placed Saracens while Gloucester Rugby are at seventh after losing their eighth game from 19 matches.

Owen Williams kicked a sixth minute penalty for the visitors but they suffered an early setback when skipper and scrum-half Willi Heinz had to leave the field in the 15th minute with an injury.

The game turned on its head with Alec Hepburn crossing over in the 17th minute and Sam Simmonds followed him four minutes later to score his fifth try of the ongoing campaign. Joe Simmonds contributed with a conversion and a penalty apiece as Exeter claimed a 15-3 lead which became 22-3 at the end of the first half with winger Olly Woodburn dotting past the line.

The Cherry and Whites showed a better response after the break with Mark Atkinson exposing Exeter's defence to set up a 41st minute try for Callum Braley and Williams' conversion brought the gap down to 22-10.

Joe Simmonds with a penalty kick in the 45th minute restored the 15 point lead for Exeter but the decisive moment came when Jack Nowell on his first club appearance since December sealed the game for Rob Baxter's men with back to back tries in the 57th and 62nd minute and Gareth Steenson, who came from the bench in the 68th minute also contributed with a try six minutes later to complete a comfortable 46-10 victory for Exeter Chiefs.

England international Nowell was pleased with his performance on his comeback from injury.

"I'm so glad to be back as one of the toughest things to do is to watch the boys go out and enjoy themselves.

"I've had a bad run of injuries this season but every single player goes through them, although it was pretty disappointing to have to check out early on the Six Nations. My body feels good at the moment.

"The squad is in a really good position for having had the taste of winning the title last season, we know what to expect but want to repeat it."