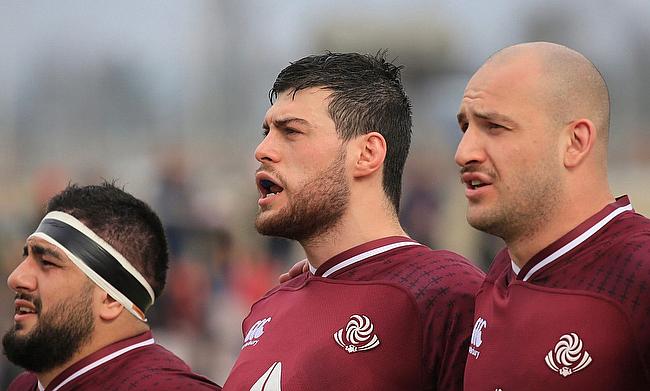 Lasha Jaiani has featured against England, Wales and Ireland during the Autumn Nations Cup
©Georgian Rugby

Exclusive: Neil Doak on growing Georgian rugby
“It is no small challenge” - How the rise of Covid-19 within the student population is affecting university rugby
Harry Fry and Stephen Varney: Hartpury duo highlight the value of the student game
Sam Skinner: I feel very lucky to play in such a prestigious competition

It was the messages Lasha Jaiani received from the University of Exeter which provided him with an extra source of inspiration at the beginning of Georgia’s Autumn Nations Cup campaign.

“I received texts from the coaching staff, the strength and conditioning team, my friends and my former team-mates before I played at Twickenham against England,” the towering second-row tells TRU.

“That was a great motivator and it continued against Wales and Ireland. It was nice to see that the university is really supportive of their alumni rugby players.”

After four years of studying and playing rugby in Devon, Jaiani has only recently left the Topsham Sports Ground behind and the 22-year-old now finds himself on the international stage with Georgia as they look to end their autumn schedule in a positive fashion.

Victory for the Lelos over Fiji on Saturday would be the ideal way to conclude an encouraging block of fixtures for Levan Maisashvili’s side, who have finally had the opportunity to challenge themselves against Tier One opposition.

STAY TUNED for Episode five as #TheLelos are getting ready for the Finals Round clash vs @fijirugby ??

Georgia’s inclusion in the Autumn Nations Cup has allowed the Rugby Europe champions to gradually develop as a team. At last year’s Rugby World Cup, the Lelos secured just one victory over Uruguay and they were also beaten 48-7 by Scotland on October 23rd.

However, Jaiani and his team-mates will head into this weekend’s clash with confidence, having performed admirably in defeat against Ireland last Sunday.

“Our main goal coming into this tournament was to really improve our entire game,” Jaiani says.

“I think, so far, we’ve used this opportunity pretty well because we have been improving week from week. We have a lot of young players as well so if they get some more Tier One experience, that only helps playing against some of the best teams in the world.”

Jaiani refers to the ‘young players’ in the Georgian ranks, and the second-row certainly falls under that bracket. The lock made his international debut against Belgium back in February and he has featured in all three Autumn Nations Cup fixtures for the Lelos.

At the age of 16, Jaiani was offered a scholarship at the prestigious Whitgift School where the likes of Danny Cipriani and Elliot Daly had burst on to the scene in the past.

“The school actually contacted me and even now, I feel very lucky with the way things happened,” Jaiani admits. “I think it is something which really shaped my future. I am thankful for Whitgift for giving me that chance.

“One of the coaches at Whitgift was playing for Kent. Kent came down to Georgia to play against the U20 side when I was like 15.

“He decided to go to the Georgia U15s academy to see if there was a second-row which could fit Whitgift and speak English! The academy just said ‘we have Lasha, he can speak English, he is pretty tall and he can play second-row so if you’re interested, we can tell his parents.

“There was the culture shock at the start when I moved. Living at the boarding house and away from home was different, but I’ve never once regretted going to Whitgift. It’s a brilliant place.”

One of Jaiani’s cotemporaries at Whitgift was former Exeter Chiefs fly-half Sam Morley and the duo also attended the University of Exeter.

Year after year, the institution has produced holistic individuals who have balanced their academics with representing the university at the highest level of BUCS [British Universities & Colleges Sport] competition.

Players such as Sam Skinner, Richard Capstick, Sam Maunder and Tom Lawday have all donned the green and white of Exeter, with Jaiani becoming a mainstay in the 1st XV during his final two years.

The university’s relationship with the Premiership and European champions continues to flourish and Jaiani feels his experience at Exeter helped him break into Georgia’s first-team set-up.

“University rugby is a really good level for young rugby players to play in,” Jaiani says. “Exeter rate you as a rugby player and by that I mean they know what level you need to play at so you can improve. I went from playing in their freshers team and slowly built up towards the 1st XV which was a great way to do it.

“The coaching team, as well as the S&C staff, were exceptional and I think that is one of the many reasons of my success today so I am really thankful to them and the programme they provided at university.”

During his time in Devon, Jaiani also represented Georgia in the U20 World Championships and the Junior Lelos have been catching the eye in recent years.

After hosting the tournament in 2017, Jaiani and his team-mates achieved their most notable results a year later following victories over Ireland and Scotland, respectively.

In 2019, the latter were the victims of another Georgian triumph in Argentina and alongside players such as Sandro Svanidze, Tedo Abzhandaze and Gela Aprasidze, Jaiani is just one of many recent graduates to come through their exciting age-grade system.

“I think the U20 side for the Georgia national team is one of the main sources of recruitment now,” adds Jaiani.

“The Georgian U20s system has been very well done and it focuses on the development of individual, young players. In 2018 and even the years following that, the Georgian U20s coaching staff have produced some really good teams.

“The people who play in the national side now, when they were our age so that U20s age, they never really got that exposure to play against Tier One nations of the same age. I think that is a big plus for boys now that they get that exposure against the highest quality of teams in their age group. I think the U20s World Cup has been a real driver for the improvement for Georgia which is a great thing and hopefully, they will keep it going.”

In Jaiani’s mind, he describes his U20s experience as achieving another small milestone: “From my time at Whitgift, I started to place goals for myself. They were small goals so it was never like ‘I am going to go from Whitgift and instantly play for the Georgia national team.’ It was about the little steps.

“When you set these goals, things slowly come themselves. I played for the Georgia U20s side and I thought when I finish this, I want to move up to the national team and one year later, I was called into the pre-World Cup camp so these small goals really helped me to reach my goal which was to play for my country.”

And the young forward will make it four appearances on the spin for Georgia when they face Fiji at BT Murrayfield.

The Pacific Islanders have been given the go-ahead to play their first match in the Autumn Nations Cup after their previous fixtures were cancelled due to a Covid-19 outbreak in the squad, but having faced Fiji in last year’s World Cup, Georgia are aware of their threats.

“Fiji have obviously not had the best preparation, but they are still a great team because they have so many great individual players,” Jaiani adds. “We played against them last year so we know it is going to be a very hard game because Fiji are very unpredictable and they have a great set of players, but hopefully we come out on top with our physicality and our team game.”

If Georgia are to be victorious on Saturday, expect Jaiani’s phone to be buzzing once again with messages of support and congratulations from those who have helped the second-row reach the international stage.