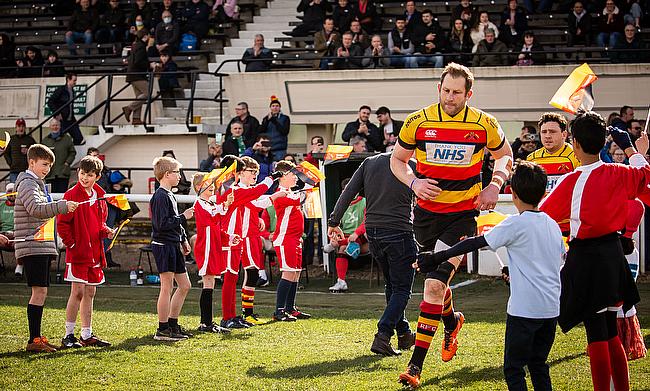 Back in 2014, Mark Bright stood on the field at Twickenham Stadium holding an England jersey to his side, the back-row having been loaned to the England Sevens programme for a two month period.

That season, Bright had scored 21 tries in 28 appearances for London Scottish, his efforts catching the eye of his former Director of Rugby, Simon Amor.

At 35, Bright said the opportunity was a “career highlight” and a “massive thing for me at the tail end of my career”.

That was eight years ago, and now Bright prepares to make his 200th Championship appearance this weekend for Richmond at 43. Not only having a double century of appearances on the horizon, there is also added potential of a century of tries, the New Zealander with 98 to his name after many years of toil.

Experiencing something of a renaissance in his ninth Championship season, having scored 15 tries so far this campaign, Bright’s monumental achievements come after a period of uncertainty.

With lockdowns, and London Scottish choosing not to compete in the truncated Championship season, Bright spent a year on the side lines, his body finally getting a chance to rest after 25 years of senior men’s rugby.

Rugby off the agenda, Bright instead made his way down to Hounslow & Whitton Cricket Club, pulling on the whites with his son, Bailey, who is one of the club’s colts.

The pair played three warm-up games together with the First XI before the season got underway, Bright making several half centuries in early summer before the pull of Samurai and the sevens circuit proved too strong.

A fresh start at Richmond soon came on the horizon, a further opportunity to play in the second division of English club rugby, his eight-year association with local rivals London Scottish having concluded when the side opted not to compete in that shortened year.

Now on the eve of what will no doubt be a thrilling encounter between Richmond and Coventry at the Richmond Athletic Ground, the South Islander is clearly not letting the weight of the occasion occupy too many of his thoughts.

“I’ll just be out there playing,” he said. “Playing a 200th game, it is a pretty good achievement, but I will just treat it as any other game. I will worry about celebrating it after the 80 minutes.

“I am thankful to Richmond for giving me the opportunity to play in the Champ again, so I am just going to put the jersey on and do what I can to win games for them and get them up the table.”

During his time in England, Bright has surfed the leagues, starting off in National 2 in 2006 with Redruth, Bright was vying the likes of Launcesteon, Esher and Henley Hawks in the third division, long away trips to Wharfedale, Halifax and Harrogate becoming the norm.

At the conclusion of each campaign, the back-row would fly straight back home to New Zealand, representing the newly formed Tasman Mako, then jumping on another plane to make his way back to Cornwall.

For five seasons Bright could continue that pilgrimage to the Recreation Ground prior to the club’s relegation and an offer from London Scottish came. During that season, Scottish had defeated the Cornishmen twice, Bright’s’ performances clearly having done enough to warrant a move to London.

From then onwards the legend of Bright was born, this hulking kiwi finding the whitewash with relative ease and never looking like slowing down. Global pandemic enforced breaks aside.

Having seen the face of English club rugby change across the years, Bright watched on just over two years ago when the RFU announced that they would be cutting funding to the second division of English club rugby, citing that the competition wasn’t producing enough players for the England national team with numerous clubs moving to a part-time playing model as a result.

“If you were a betting man, you could probably see it coming two or three years before that,” Bright said. “It was always being said that they were going to make cuts, and there is plenty of players that have played in the Champ before me, and there will be plenty of players who will play in the Champ after me and will be saying the same thing; that the competition should be funded.

“Why it is not funded, I don’t know. There have been so many players, coaches and staff go through the Champ, into the Premiership and on to international honours. I don’t see why it shouldn’t be funded.

“I think you could ask the question over and over again, and you will get the same answer, which would probably be no answer. You will be banging your head against a wall, and I think the funding is going to be a little bit lower next year and I think maybe you will see more teams going semi-professional.”

It is that accusation that not enough players find their ways to the England setup or Premiership that causes the most offence, Bright having played alongside plenty that have made the step up.

“Every year you see players out of the Champ getting signed in the Premiership,” he said. “It’s like a big secret and it never happens. It is odd. It is very odd.

“There will be more people out of the Championship this year that get snapped up by Premiership clubs, because they just pick them up. 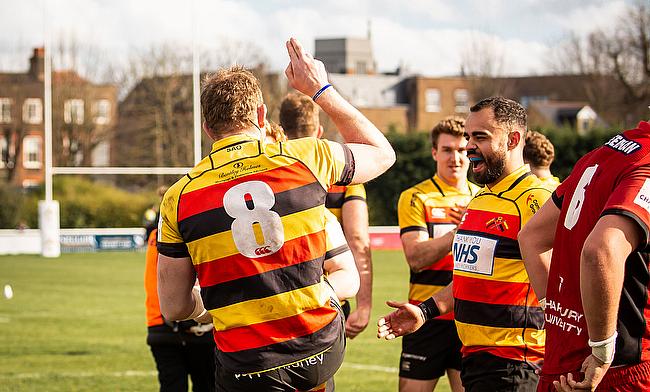 “An example; Bedford’s captain, Rich Lane, who has been picked up by Bristol for a month. It is not as if they aren’t looking at the Champ.

“The Premiership are looking at the Championship, for sure, because players are getting picked up all the time.”

From his first season in the second division in 2011/12, Scottish established themselves in the competition and in 2014/15, Bright finished the season as top try scorer, registering 26 tries on the way to the playoffs and a loss across two legs to Worcester Warriors.

Before the funding cuts in 2020, the Championship had its warning signs. In recent memory, you can think of the downfall of London Welsh, Yorkshire Carnegie and Rotherham Titans, but with less professional rugby clubs in the country, there is likely to be further changes to the clubs we rank amongst the elite.

This is what the RFU’s and Premiership’s guidelines hope to preserve, by not extending clubs to operate at a level higher than they are capable, but even then, those guidelines have their flaws.

Representing Ealing Trailfinders for two seasons, Bright still has friends within the camp and even sees comparisons between the problems that London Welsh faced after petitioning to join the top flight after their original application was rejected for similar concerns.

“These teams have put their applications in, and all of a sudden in March, they have been told they don’t meet criteria because of the 10,001 capacity stadium, where you can clearly see that other Premiership don’t have those side crowds week in, week out,” Bright said.

“It is just another kick in the nuts from the RFU to the Championship. I know they are appealing, whether that does anything, I don’t know. London Welsh appealed, and by the time they were let into the Champ, it was June or July and they had to rush to get a squad.

“Then two or three seasons later, they ended up 10 leagues down the ladder. Hopefully that doesn’t happen to whoever wins the Champ this year and hopefully they get the opportunity to go into the Premiership and play for it.

“When I was at Redruth, they were at National 1 and they were getting X-amount from the RFU, which made it sustainable for them to play in National 1. I did five years with them and then in the last season we were told that the money was being pulled.

“I have seen teams that I played against between 2006 and 2011 pretty much disappear, so it is quite sad to see that, but that is the nature of the beast I suppose. If you are not going to get extra funding, and sponsors are having to front up extra money, then some clubs are going to struggle, and that is what has happened.”

There will be a changing of the guard in the Championship in the coming years, with Cornish Pirates’ owner, Dicky Evans, having announced a three-year ‘sunset plan’ that will conclude his investment into the club.

On the hunt for a new investor, we have already seen Nottingham and London Scottish become part-timers. For many years, Richmond have been self-sufficient for a number of years, turning out a plethora of sides at all levels.

Being part-time is something that Bright has had to get used to, the 43-year-old now labouring alongside his rugby playing commitments, turning up to training two nights a week before turning out in yellow, red and black on the weekends. 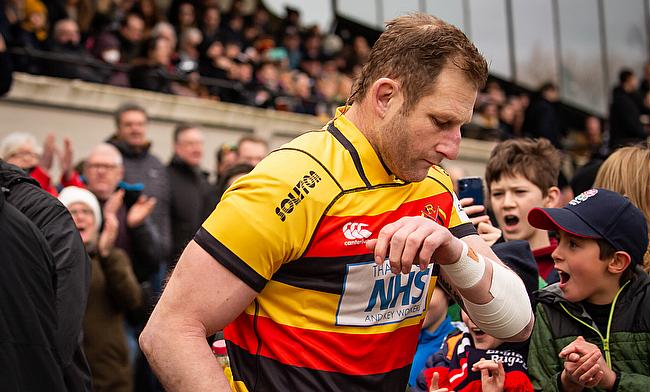 Making his 200th Championship appearance is going to be somewhat different to when he made his 150thappearance for London Scottish. Playing against Richmond that day, Bright made his way onto the pitch with a fractured fibula, something that on reflection he describes as “not the smartest thing to do”.

Coming into their penultimate game of the season, Steve Hill’s Richmond are eighth in the Championship. At times across the league year, the West Londoners have found themselves challenging at the top, having bounced between second and mid-table consistently.

It has, in many ways, been a season that has exemplified the Championship as a whole. Coming into the season, many anticipated that Ealing were going to walk into the Premiership, the reality being that the Londoners are second, two points behind Doncaster Knights, and one point ahead of both Cornish Pirates and Jersey Reds.

“That’s the Champ,” Bright said. “If you are two or three percent off, you are going to get beaten and it doesn’t matter, because the bottom teams are beating top teams, and you see that every year.

“You have got to be bang on every week pretty much and this year has been very topsy turvy for us as a club, we have been in games right to the end and lost.

“We have got 11 or 12 bonus points this year, and I’d say six or seven of those are from losses, so that’s how close we have been in games.

“We are happy with where we are this year at eighth, but we know we could be a damn sight higher. We could be in sixth, pushing mid-table, so we have still got two games to go, and we will see what happens.”