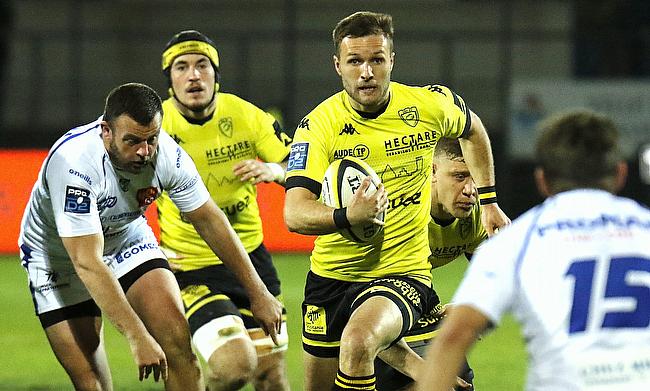 After a quick Google search, a one-way flight to Carcassonne will cost you just £18.

In two hours, you can go from the East Midlands all the way to the south of France, but in the case of Johnny McPhillips, his move to US Carcassonne was in some ways similar. Following two years with Leicester Tigers, the 25-year-old swapped Mattioli Woods Welford Road for the Stade Albert Domec and a place with the Pro D2 side.

After making 25 appearances for Leicester, McPhillips was on the hunt for more game time, with six of his last seven appearances in green, red and white coming as a starter.

That spell was the fly-half’s most consistent since his arrival at Oval Park, his most regular stint in a starting XV since his debut season with Ulster all the way back in the 2017/18 season.

After making strides whilst competing for spots in matchday squads alongside George Ford, Zack Henry and Joaquín Díaz Bonilla, it was time for the Sedbergh schooled playmaker to make a go of it on his own.

“I had the option to stay for another year, but I sat down, had the chat with Steve [Borthwick, Head Coach of Leicester] and just said that I loved it there,” McPhillips told TRU.

“It was difficult to leave, but I made that decision [to leave] before that run of games, so even though I still played those games, my decision would have still been to go.

“George [Ford] was by far and away the number one. This season he has been the best 10 in the Premiership by a mile. I could see that the game time was going to be limited, so for me it was about being proactive.

“I just felt like there was an opportunity for me to go away and play in a good league where I could get that exposure and that game time I was looking for and put together consistent performances.”

So far, McPhillips’ time in France hasn’t been without its pitfalls. An injury sustained in early October meant that the 25-year-old spent six months on the sidelines, missing 19 games in the process and watching on as his new teammates competed at the top of the division.

Returning back to the starting line-up against Colomiers at the end of March, McPhillips has played a starring role for his team and has formed a formidable partnership with Portugal scrum-half, Samuel Marques.

Most recently, Carcassonne picked up a comprehensive 54-24 win over Aurillac, McPhillips registering his first try for the club in his eighth start for the team. France hasn’t been without its challenges for the man from the North-East, who has had to get used to long bus rides and a new way of playing across the Channel.

“I just needed to be playing,” McPhillips said. “I have been in great environments at Ulster and Leicester, but I felt like the only missing piece of the puzzle was that consistent game time.

“If I put myself in an opportunity where I could have a strong chance of getting that, then I would be able to fulfil my potential as a player and coming across and getting injured, that is the typical thing that was going to happen, I guess.

“It has been difficult, probably more difficult than I had imagined, but not just in rugby, it makes you grow, gives you new life experiences, meeting new people and I have been opened to a completely new way of rugby.

“It has been frustrating at times, but I wouldn’t have had that exposure if I played at Leicester or in the Premiership.

“For me, it was never looking too far ahead. It was asking what the next logical step was, that I could make myself a better rugby player and I felt that playing games was it.

“I had a conversation with my attack coach at Carcassonne [Jean-Marc Aue] recently because during the Nevers game [19-17 loss] when they were putting pressure on us, I reverted back to setting up a kick, kick-chase and all that sort of stuff. 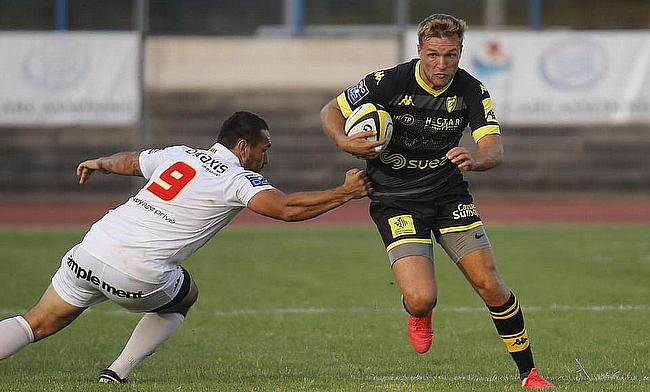 “We were chatting it through, in France the boys aren’t brought up to compete in the air. I stuck a bomb up in the 78th or 76th minute, and it was a good kick, but no one chased it. In England, when that goes up, it is one of the biggest outlets to apply pressure.

“They are not really wired like that here. You have got to keep playing. It forces you to always think, always look at decisions, but at the same time when you would like a bit of help or someone else sees something that you can’t, you might not necessarily get that the whole time.

“Once you get your head around that and realise it is not personal and the feedback is very result dependant, you get past it and don’t worry about it too much.”

Having spoken to Zack Henry, Kini Murimurivalu and Nemani Nadolo about their varied experiences in France, McPhillips is bringing all that he has learnt from his time with Leicester and Ulster.

It is fair to suggest that he has always played his best rugby when getting regular opportunities and this could be seen during his time in Belfast. When not playing for Ulster, the half-back would make his way to Ballynahinch to keep his momentum going and subsequently he earned call-ups to the Ireland U20 squad, his Northern Irish parents the reason for his qualification.

Here he is laying on the last of their eight tries. Scored one too.

Keeps them right in the play-off spots in 5th.

Making it all the way to the 2016 World Rugby Under 20 Championship in Manchester, McPhillips was an integral cog in the green machine, playing alongside the likes of James Ryan, Andrew Porter and Jacob Stockdale.

Ultimately in the final, it was England who lifted silverware, with Joe Marchant, Callum Chick and Harry Mallinder all going over the whitewash. It was by no means a bad day at the office for McPhillips, who nailed both of his conversions prior to being replaced by Brett Connon.

Much like his move to Carcassonne, McPhillips’ arrival at Tigers came late in the day. Initially game time back in England came at both Doncaster Knights and Nottingham in the Championship, but within 10 minutes of his first start for the club, the 25-year-old tore his PCL.

Heading back to his family home in Gosforth as the pandemic sunk its hooks into society, Zoom calls with strength and conditioning and medical staff became the norm for rehabilitation.

His brace came off as training for rugby’s restart resumed and there were plenty of changes in the East Midlands. Principally, the arrival of Borthwick at Welford Road marked a fresh start for the team, who thanks to Saracens’ enforced relegation had any worries of relegation eased.

It was by no means an easy start to life under theri new head caoch as they still finished 11th in the Gallagher Premiership but several stars emerged in Leicester, with Freddie Steward and Dan Kelly just two to take their chance with both hands.

“He [Borthwick] just brought in standards that if you played for Leicester Tigers, these are the minimum requirements and if you are not going to meet the minimum requirements, because you don’t want to or you can’t be arsed – and a lot of them were effort based – it was telling you what it was going to take to play for this team,” McPhillips said.

“The foundations were there, but it was never a case of looking at the score and determining how good we were. It was about looking at ourselves, building our foundations, controlling what we could and building those standards.

“It is an old adage, but we were putting pride back in the jersey, training hard and having that feeling of training hard during the week, feeling prepared for the game and all of those things build confidence.

“You were reaping the rewards with some of the youngsters that got opportunities in that window and got themselves starting spots.”

When it comes to what the future may hold, McPhillips is looking at staying put in France for now. Carcassonne are currently fifth in Pro D2 and have three games between now and the end of the regular season, with a place in the promotion play-offs on the cards.

“My first six months, it was a huge, huge adjustment, just in terms of the way they do things,” McPhillips laughed. “You will have meetings, which on the schedule say 14:00 and then it won’t begin until 14:15 with people still coming in with coffees. 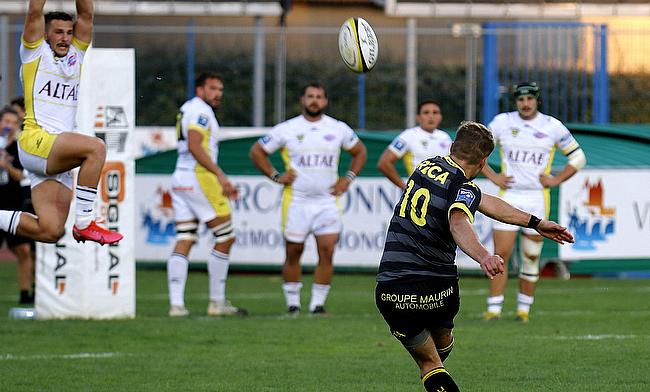 “It’s tear your hair out kind of thing. Then, I am used to putting a kick up for pressure with people chasing it, and here no one will. It is part of the learning when you come to France, I think. I still by no means understand it, but I am getting there.

“You have got to understand that they operate differently, which is not necessarily a bad thing. You have just got to embrace it. You can’t fight it and I was fighting it like hell for the first however while.

“I think fly-half is potentially one of the most difficult positions that you could transition across from. You run the team, but I am lucky that I have got a great scrum-half who speaks a bit of English, but is very experienced so he helps control the ship and the language. I have had a great experience so far. I wouldn’t change it.”

A conversation with McPhillips will cover a variety of topics, including his time in the Newcastle United Academy, his envy of his brother enjoying the Premier League club’s renaissance under Eddie Howe at St James’ Park in person, plus his foundations in professional rugby, but at the end of that frivolity, it all comes back to playing in France.

The temptation to actually book one of those £18 flights becomes very real as does a trip to the fortified city that inspired a board game series that had killed many an hour on a rainy summer day, that taste of what the culture of French club rugby has to offer, with its thousands of fans stood in the stands.

“I got warned about the bus journeys for away games,” McPhillips said. “I got back on Saturday morning [after Nevers], got back into my car at 07:00, not had a wink of sleep after the caffeine I had for the match and that was my sleep pattern gone for the week.

“We had a mini in-season camp before this last block of games, and you would go out for dinner and there would be a bottle of wine on the table, and for me that was just crazy, because we were there for performance, but the French mentality is that we had trained hard during the day and then enjoy each other’s company.

“I have learnt quite a lot from that, because when I was younger, I was very intense, and rugby was absolutely everything. It has taught me to chill out a little bit. Rugby isn’t everything, so you have to relax, and you end up playing better that way because you are more relaxed, more free, more liberated.

“But from what you have heard, all the stereotypes are true, all true. There are lots of baguettes, bread everywhere, wine on the tables and whatever else. You probably wouldn’t change it though.”