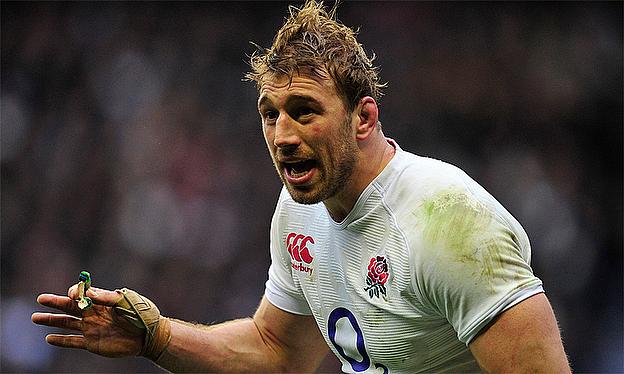 England have confirmed that Chris Robshaw will remain captain for next month's autumn internationals at Twickenham.

Robshaw has been under pressure for his place in the team but has been retained as skipper for the Tests against New Zealand, South Africa, Samoa and Australia.

Head coach Stuart Lancaster has included Bath wing Semesa Rokoduguni and Saracens lock George Kruis in his 33-man squad for the QBE Series. Rokoduguni has been promoted at the expense of Chris Ashton.

"Chris Robshaw continues to lead from the front," Lancaster said.

"With other players now stepping up into captaincy and senior roles at their clubs, we are building a team of leaders who can take England forward."

Manu Tuilagi has been omitted from the 33-strong party, but tellingly he has also been left out of the names not considered for squad selection due to injury.

Tuilagi was on Tuesday ruled out of all four of next month's Tests by his club Leicester because of a groin problem, but it is clear England hope he can yet play a role.

"We have included Jonathan Joseph as an injury replacement for Manu," Lancaster said.

"It's obviously disappointing to lose Manu but Jonathan has been in great form and deserves this chance.

"Our medics will continue to work closely with Leicester's and ensure that Manu is supported in his rehabilitation from his injury."

High-profile omissions from the 33 are Danny Cipriani and Freddie Burns with Owen Farrell, George Ford and Stephen Myler chosen as the squad's three fly-halves.

Centre Billy Twelvetrees and wing Jonny May are present despite enduring mixed tours to New Zealand in the summer and Northampton flanker Calum Clark features among the six back rows.

England's squad will meet at Pennyhill Park on Sunday ahead of the opening fixture against New Zealand on November 8 and Lancaster confirmed there will be further additions.

"We are still monitoring a number of players injury-wise," Lancaster said.

"With another intensive round of European games to come, including the Wasps-Harlequins and Sale-Clermont games on Sunday, there are likely to be additions to the squad after the weekend.

"There is plenty to be decided before the New Zealand match comes around."

Lancaster told Sky Sports News that he was "disappointed" to lose Tuilagi to injury and would not rule out handing Rokoduguni a baptism of fire against the All Blacks.

"We have certainly discussed that," he said. "When you are looking for balance in your backline he comes into the equation. For his collision and his ability to beat players. He's a finisher as well."

Lancaster defended the omission of Cipriani from his squad.

"If you look at the objective stats, the player with the best skills execution is Stephen Myler and think he deserves his chance. Owen (Farrell) hasn't played as much but his inclusion is merited on what he has done for us in the past."

Asked about Bath's recent failed attempt to sign Steffon Armitage from Toulon, Lancaster said: "If it had happened it would have been great, although Steffon would have had to work hard to get into our squad. It hasn't happened which is a shame. Now we will have to see how it plays out."