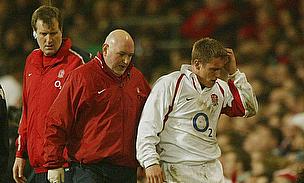 The Rugby Football Union has announced major changes to how concussions are to be managed throughout English professional rugby.

Concussion awareness and education, game-day management and graduated return to play for players who have suffered concussion are the cornerstones of a joint RFU, Premiership Rugby and Rugby Players Association initiative.

Players, coaches and referees will be obligated to complete a new online concussion module within the next two months.

This applies to all male players registered to play in the Premiership, Championship players over the age of 18 and contracted England Sevens players.

It also applies in the women's game to England representative players over the age of 18, coaches and referees.

The interactive module explains what concussion is, the symptoms and potential consequences as well as outlining effective management protocols.

The RFU will administer automatic fines if the module is not completed by the required date and a player or coach can be made ineligible to play if they have not completed it.

Memory tests will be strengthened, the balance test altered and the assessment period extended from five to 10 minutes as the main changes to game-day protocols.

At all Premiership grounds and Twickenham, doctors will have access to live television feeds and replays to help them make their assessment.

An independent review of injuries and management will be carried out by "two experienced independent medical practitioners" which will include them reviewing match footage and this review system will be linked to the RFU's disciplinary process.

The RFU's chief medical officer Simon Kemp said: "These significant changes were driven by the Professional Game Board medical advisory group review of the 2013 concussion forum and continues the programme of work that we have been delivering over the last 10 years on concussion.

"Working closely with Premiership Rugby and the RPA, we believe this will provide a comprehensive package of processes designed to enhance all elements of professional player concussion management.

"The education module, game-day management and return to play protocols have been independently reviewed and validated, as well as backed by compliance.