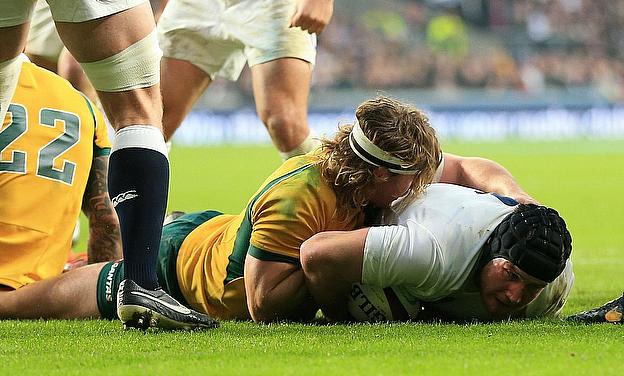 Head coach Stuart Lancaster expressed quiet satisfaction after England dealt with the pressure to claim a morale-boosting 26-17 victory over World Cup opponents Australia in the QBE International at Twickenham.

Defeats earlier in the autumn to New Zealand and South Africa had extended England's losing streak to five matches before the defeat of Samoa and a third win in 14 matches for Lancaster's men against the southern hemisphere's big three.

Lancaster, who played down the significance of victory against a Wallabies side who will be alongside England in Pool A at next year's World Cup, described the atmosphere in the home dressing room at Twickenham.

"There was a real single-minded approach to the game we wanted to take. I thought we took it and I thought the players applied the plan really well.

"It was a smarter game we played. We didn't quite get it all right, (but) it certainly feels better having won the last game."

It was by no means a straightforward win for England, but Bernard Foley's fine try and Will Skelton's score were not enough for the Wallabies to avoid a third straight loss.

Lancaster dismissed the relevance of the victory with regard to the World Cup and instead spoke of the importance of England's next contest, against another Pool A opponent in Wales in February's RBS 6 Nations opener, and the hordes of players returning from injury.

He added: "We'll not look too far ahead because the next game's Wales. It's at the Millennium Stadium. It's a Friday night.

"The tournament will look after itself when it comes around. Australia will have a lot of time together with their new coach (Michael Cheika).

"You look at the quality of players that they've got in their squad, I think more time together under the new coaching regime they'll only get better.

"All teams will strengthen and develop over the course of the next 10 months.

"We've got seven British Lions to come back into the team and the likes of Joe Launchbury, who didn't make the Lions but is an important player."

Lancaster lauded England's forward effort, which was the foundation for victory.

He said: "What we felt was if we played the game in the right areas of the field we could use our set-piece to our advantage. Scrum and maul."

"He has been one of the stand-outs over the last two games," Lancaster added.

"His inner belief has grown. He's developed as a player. He'll be a hard person to shift now."

Much was made of the dropping of Owen Farrell after a challenging autumn campaign, with Ford given an opportunity to impress at fly-half. The Bath number 10 did not disappoint.

"He was excellent," Lancaster said. "I thought the accuracy of his kicking game was absolutely spot on."

Lancaster gave a positive appraisal of his midfield but expects the availability of Manu Tuilagi to provide an extra dimension.

Asked if there was one thing he would add to improve, Lancaster said: "Manu. If you're going to win all the big games all the time you're going to need all your best players, and he's certainly in that category."

Australia have lost to France, Ireland and England in successive weeks, but Cheika was not too downbeat as he rued Rob Horne's late missed opportunity when Israel Folau's pass failed to go to hand.

The Wallabies head coach said: "If we could have passed a bit better, we would have been in front with five or six minutes to go because Rob Horne had only to walk a few metres and he was going over to score.

"There's not going to be any panic at our end. There are some clear messages we need to sort out, but if we do that we will be well and truly competitive."

The areas for attention include the scrum, which provided the platform for England's win.

Cheika added: "We need to change our technique, change our strategy. Perhaps we're just a bit too honest in the scrum."

The death of cricketer Philip Hughes has made for a difficult week in Australian sport and his passing was recognised with a minute's applause.

Captain Michael Hooper said: "It was obviously a very sombre mood throughout the week.

"To see how much respect the guy has got and how many people have cared about it is fantastic.

"It was a different experience to be a part of and a special one."