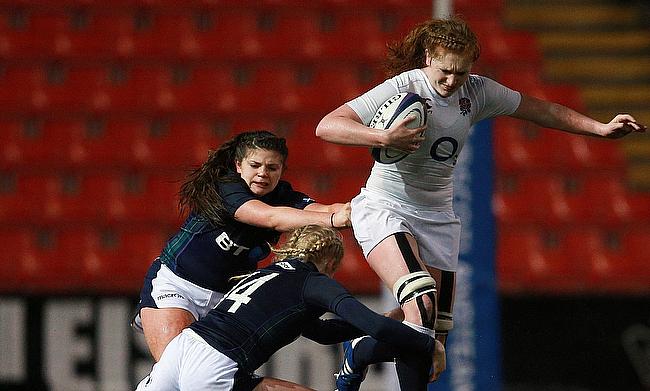 First-half tries from Lauren Cattell and Millar-Mills put England in control, and after Millar-Mills' second, Sarah Hunter and Lucy Demaine added further tries to secure a one-sided win that could have been achieved by a wider margin with superior kicking.

The result secures a positive to start to the competition for England, who in 2015 recorded their worst ever finish when they came fourth behind Ireland, France and Italy.

Scotland are still looking for a first Six Nations victory since 2010, and a first win over England since 1999.

In the opening minutes, England's Katie Mason wasted a fine chance when knocking on close to the try-line from a wide position.

They finally went in front in the 24th minute, when after a turnover centre Cattell created an overlap to touch down in the right corner.

In the 32nd minute, flanker Millar-Mills burst through to score under the posts, and fly-half Amber Reed added a routine conversion before a penalty to give England a 15-0 half-time lead.

Eight minutes into the second half, Millar-Mills again used her pace to produce another individual effort to touch down under the posts.

Captain Hunter then forced her way over from the back of a driving maul, extending England's advantage to 25-0.

Scotland fought valiantly in response but England's defence was resilient throughout.

And the hosts's miserable look was compounded when one last fortuitous bounce went against them; Demaine, on her debut, charged down a kick before touching down and Cattell converted to inflict a final blow on the well-beaten Scottish side.