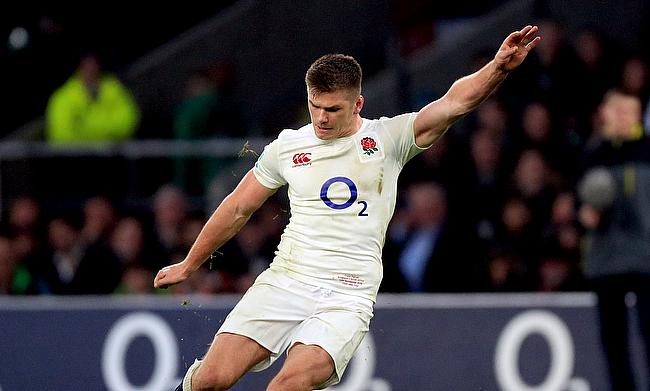 England under Eddie Jones extended their winning streak to 10 matches after defeating the Springboks by 37-21 at the Twickenham Stadium on Saturday to end 10-year wait for a win over the Boks.

The hosts looked completely in command against opponents who were shockingly ordinary at Twickenham surface which was affected by persistent rain.

Although the visitors managed to score a couple of tries in the second-half, the hosts managed to extend their lead by keeping-up with Adriaan Strauss and his men.

Courtney Lawes in his 50th Test did the honor of leading his side onto the pitch.

The Boks got an early scoring opportunity on third minute after getting a penalty 45 meters out from the posts. Fly-half Patrick Lambie nailed his kick to open the account for the visitors.

Lambie slotted another three-pointer on the seventh minute, this time with a successful drop goal attempt to give his side the early edge.

However, Jones' men were quick to pull the proceedings back to even-steven with a converted try on 10th minute when left-wing Jonny May finished smartly in the corner after a lovely set piece from England's backs off the line-out followed by a double decoy move found right-wing Marland Yarde in empty space who fed it wide to May, who took care of the rest.

Centre Owen Farrell did not disappoint with his kicking skills as he added two more to England's tally as the hosts took a single-point lead.

The Boks earned a penalty from the scrum on the 19th minute as Lambie scored another three-pointer to put the visitors once again ahead by slender two-points.

On 33rd minute the Boks were penalized for collapsing the scrum which allowed Farrell to restore the one-point lead.

A couple of minutes later into the game, number-5 lock Lawes scored the second try of the game for the hosts but not before the TMO was consulted for a knock on by Lambie. The TMO concluded that Lambie pushed the ball forward out of Mike Brown's hands and hence was not considered as knock on thus awarding the hosts their try.

Farrell's successful conversion added the cherry on top for England.

Elliot Daly nailed the penalty from halfway line at the concluding minute of the first half as the scorecard read 20-9 at the half-time whistle.

England came out all guns blazing from the very beginning of the second-half by scoring a try with just three minutes into the half. Number-eight Billy Vunipola's big run was followed by scrum-half Ben Youngs managing to sneak through a huge hole off the ruck to find fly-half George Ford who went on to score the touch down.

Farrell maintained his perfect kicking record with another conversion.

A 48th minute penalty allowed Farrell another shot at the goal. The inside-centre extended the lead to 21 points with the writing on wall becoming clear for the visitors.

Johan Goosen who replaced Lambie on 53rd minute, five minutes later went on to score the first try of the match for the visitors after the TMO gave the Boks benefit of doubt for a fifty-fifty pass. Goosen however failed to add the extras on his own try.

A couple of minutes later, the hosts were awarded a penalty for high tackle which Farrell failed to convert.

Youngs was once again the man for England to catch Springboks defence fast asleep on the edge of the rucks. The scrum-half sold a dummy to find Farrell who scored an easy try and immediately followed it up with a conversion.

Both the teams failed to score in the next 10 minutes as the two managers brought in a series of changes.

Boks' fullback Willie le Roux on the 78th minute finally broke through the shackles to go wide and score the second try of the match for the visitors. Combrinck slotted the conversion as the visitors finally succumbed to a 16-point defeat.

England are three more victories away from matching their longest winning streak of 14.

England will now host Fiji next Saturday while the Boks will travel to Stadio Artemio Franchi to face Italy.