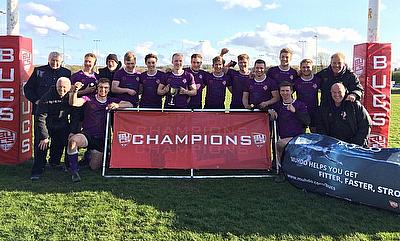 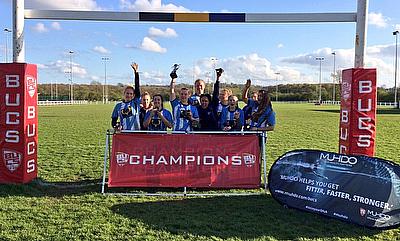 In the Men’s competition, Durham produced a ruthless display to beat Manchester Met 39-0 in the final and their victory marked a double success for the university after the north-east outfit won the BUCS Championship 7s crown last week.

As for St Mary’s, they defeated the University of Bath 31-12 in the Women’s final after coming through a tough semi-final against Leeds Beckett.

Both Durham and Manchester Met were drawn into Pool A and Alex Keay’s side dished out an early warning as they won all four of their matches including a 32-0 win over MMU while Rob Jones’ men advanced into the quarter-finals after MMU beat Nottingham Trent, Bristol and Bournemouth.

There was joy in Pool B for both Leeds and Leeds Beckett as they cruised into the last eight after solid wins in their group while St Mary’s, Northumbria and Loughborough all fell at the first stage.

Cardiff Met and Essex made it through from Pool C while last week’s BUCS Championship 7s semi-finalists, Bath, progressed to the knock-out rounds alongside Newcastle from Pool D.

Durham showed their class once again in the quarter-finals as they eased to a 24-7 win over neighbours Newcastle while MMU sent out a statement following a 28-0 victory against Bath. Pool B winners Leeds Beckett continued their unbeaten run in the competition after beating Essex 29-7 while Cardiff Met also advanced comfortably after a 35-12 triumph against St Mary’s.

If the last eight seemed relaxed for Durham, their semi-final tie with Cardiff Met followed suit as they stormed into their second final in as many weeks after a 31-10 win. The other clash in the last four was a much a closer affair, but Manchester Met showed the quality which saw them lift the league and cup double in the XV-a-side game as they narrowly beat Leeds Beckett 21-19.

The stage was set for MMU to gain revenge over Durham after their heavy defeat in the pool stages, but history repeated itself as the north-east side produced another excellent performance to clinch the title.

St Mary’s journey to the final began in Pool A and the Twickenham-based side did well to get out of a group which contained Nottingham, Cardiff Met and both the University of Manchester and Manchester Met. St Mary’s progressed alongside pool winners Nottingham.

Bath were drawn into Pool B and looked a formidable force early on as four straight wins sent them into the quarter-finals and they were joined by Leeds who picked up wins against East Anglia, Exeter and Bishop Burton.

From Pool C, Bournemouth progressed with a 100 per cent record along with runners-up Essex while and in-form Leeds Beckett side moved into the last eight with Bristol also advancing from Pool D.

After a tough pool stage, St Mary’s clicked into gear in the quarter-finals as they defeat Bristol 24-10 while Bath continued their fine run in the competition as they beat Essex 20-5. Pool C winners Bournemouth crashed out to Leeds 26-12, but there were no such problems for Leeds Beckett as they triumphed 24-10 against Nottingham.

The semi-finals saw St Mary’s come up against a confident Leeds side, but they managed to squeeze through to the final with a resolute 22-17 win while Bath repeated their quarter-final score line against Leeds Beckett.

With Bath heading into the final with a 100 per cent record, they may have been seen as favourites, but St Mary’s produced a stellar performance to seal the trophy and success in Leeds.