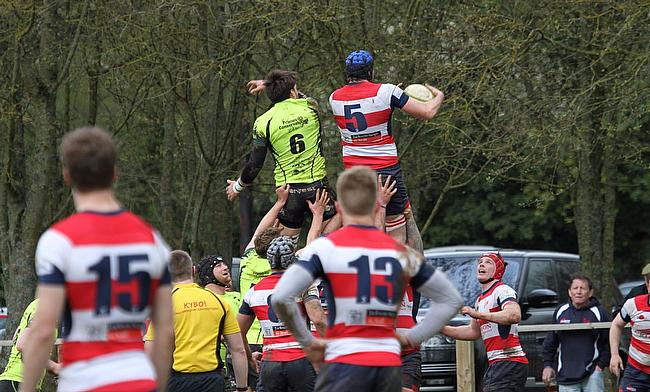 The relegation battle took centre stage once again in National Two South and Dorking sent out a massive statement to their rivals after securing a vital win.

Dorking currently occupy the final relegation spot in National Two South, but their victory over Bury St Edmunds on Saturday means they are now only  three points from safety with two matches left to play.

Worthing Raiders are Dorking’s nearest rivals following their defeat to Taunton Titans and with Worthing and Dorking taking on each other this coming weekend, there is now no room for error for either side.

Clifton could now be dragged into a relegation battle following a loss to Canterbury while the Redingensians and Barnes look they have done enough to stay in this division, despite them not yet being mathematically safe.

One team that has had their fate sealed is Southend Saxons who were relegated following their defeat to league leaders Cambridge. That win for Cambridge keeps them five points clear at the top of National Two South while the Old Albanian kept the pressure on their title rivals with victory over the Old Elthamians.

Elsewhere, Chinnor’s remarkable turnaround continued as they moved into the top six and Bishops Stortford and Redruth kept up their good recent form.

Southend Saxons have been relegated to National Three following this defeat to league leaders Cambridge who maintain their five point advantage at the top of National Two South.

This wasn’t a straightforward victory for the hosts though despite Benjamin Adams and Albert Portsmouth both crossing to give them a 14-12 half-time lead.

Southend’s points came via a Penalty Try (after Stefan Liebenburg was sin-binned for Cambridge) and a Thomas Ashton score.

The Saxons then went ahead after the break as Bradley Burr nudged over a penalty, before the table toppers clicked into gear.

James Ayrton and Lawrence Hutchinson both touched down to restore Cambridge’s lead and when winger Reuben Haile was yellow carded for Southend, the hosts hammered the final nails in the Saxons’ National Two South coffin.

James Stokes dotted down before Portsmouth grabbed his second try of the afternoon as Cambridge moved another step closer to promotion to National One.

The Old Albanian scored eight tries in securing another valuable bonus point win at home to the Old Elthamians.

The OA’s are still hot the heels of Cambridge, but have also now sealed the play-off spot at the very least for this season with two games to spare.

Winger Matthew Deane got Old Albanian’s first try in the 11th minute and that was followed by scores from Johannes Lombaard and Michael Allan in the first half.

Allan got his second straight after the break before Craig Dowsett went over for the Old Elthamians first try of the afternoon to back up Thomas White’s two first half penalties.

However, the OA’s continued to extend their lead as Chris May, Samuel Lunnon and Lombaard again all crossed to give them a 41-13 lead with a quarter of the game still to play.

Thomas Brown crossed for a consolation for the OE’s on 71 minutes before Nicholas Stevens rounded off proceedings for the OA’s who are still firmly in this title race.

The home side didn’t take too long to get on top and took full control after two early tries in quick succession scored by Rory Young and Samuel Coleman.

Stortford went on to score a Penalty Try just before half-time to give them a 17-0 lead, before the floodgates opened up.

Baxter Wilson and Joseph Clarke both crossed twice in the second period while Rory Banks also touched down for Stortford and George Cullen kicked a further 11 points.

The Redingensians could only manage an Oliver Taylor try in the second half as they were blown away by their hosts who remain third in the table while the Redingensians have dropped to 11th place – now eight points clear of the bottom three.

Redruth’s brilliant recent form continued on Saturday as they beat Barnes at The Recreation Ground to secure their 11th win from their last 13 matches.

Tries from Nielson Webber and Richard Brown along with three successful kicks from David Mankee gave the hosts a 18-7 half-time lead despite Roger Brett Rule and Christopher Fuca both being sin-binned for the Reds.

Barnes responded after half-time with a Tom O’Toole penalty, but a Penalty Try to Redruth just before the hour made it 25-10.

O’Toole struck again from the tee with 10 minutes remaining before lock Matthew Steele was yellow-carded for the away side.

This opened the door for Redruth to clinch their 17th bonus point of the season and they duly delivered when Kyle Marriott barged his way over.

Barnes had the final say of the afternoon when Marc Popham touched down, but it was another victory for Redruth who are closing in on an impressive top four finish for this season.

Taunton Titans delivered a blow to Worthing Raiders’ survival bid as they ran in five tries to secure the victory despite playing the majority of the game with 14 men.

Gary Kingdom had kicked Taunton into an early lead before prop Alec Chase was red-carded on the 10 minute mark for the hosts.

But Worthing failed to capitalise on the extra man in the first period as Kingdom landed another penalty before scoring and converting the first try of the afternoon on the stroke of half-time.

James Arthur reduced Taunton’s lead to six points as Worthing opened their account five minutes after the restart before scrum-half Daniel Peach was sin-binned for the away side.

In his absence, Worthing conceded another try as Aron Struminski flew over for the hosts to restore their 13 point lead before Kingdom struck over his third penalty of the day heading into the final 10 minutes of this contest.

Dan Frost got try number three for Taunton on 70 minutes before the flanker was sin-binned 60 seconds from the end. James Ure touched down for Worthing in the final play of the game, but it was all in vain as this could prove a damaging defeat for the Raiders.

Currently, they sit just three points clear of the relegation zone and with the crunch match with relegation rivals Dorking to come this Saturday, they now cannot afford to lose that game otherwise they could be facing the prospect of National Three rugby next season.

Chinnor’s amazing revival continued on the weekend as they thrashed already relegated Launceston to move up to sixth in the table and secure their safety in National Two South.

They are now 12 points clear of the drop and eight wins from their last 10 games is the reason behind their remarkable turnaround as they sat in the relegation zone just three months ago.

Chinnor were almost out of sight at half-time, Kieron Gross scoring two tries and Greig Goodfellow, Henry Lamont and Oscar Heath one apiece.

A penalty by Benjamin Stansfield was Launceston’s response in a difficult first half for the side that is still searching for their first win of this season and it got worse for the division’s bottom club after the break.

Goodfellow, Lamont and Heath all went over once again and Nathan Hannay, Benjamin Manning and James Tyras also crossed to complete the 11-try rout.

Dorking secured a crucial victory at home over Bury St Edmunds to move them to within three points of safety.

Dorking currently occupy the final relegation spot in National Two South and with their nearest relegation rivals to come this Saturday, this was a huge win for the side.

Ryan Jeffrey’s early try was the only points scored in the first-half before the hosts went through the gears in the second period.

Benjamin Marfo, Matthew Noble and Cameron Pimlow all touched down to give Dorking a 27-0 lead with 18 minutes left in this contest with Bury unable to respond for the first hour of this match.

Eventually they made the breakthrough on 67 minutes when Matthew Edison crossed and the flanker doubled his and Bury’s tally seven minutes later, but it was all too little, too late for the away side.

Canterbury took a huge leap to safety in National Two South as they beat Clifton at home to move eight points clear of the relegation zone.

After Alexander Giltrow had opened the scoring for the afternoon for Clifton, the hosts raced into the lead with George Micans, Martyn Beaumont and Courtney Horey all dotting down before William Pomphrey replied for the visitors.

By the break, Clifton had reduced the gap to 12 points and that gap was then wiped out as Pomphrey’s second and a try from Bradley Barnes levelled the scores at 24-24.

But, two more tries followed for Canterbury and they proved decisive as Mason Rosvall and Max Cantwell both touched down to wrapped up the win while Barnes made sure Clifton left Kent with two points as he slotted over a late penalty.