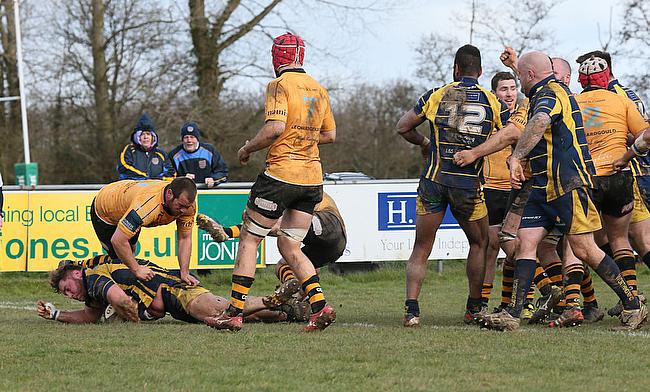 Relegation looming for sides in National Two South
Cambridge remain in pole position after scintillating win
O’Toole: Our aim is to finish in the top eight

With the title race still gathering pace with three weeks to go of the season, it would be easy to forget the battle for survival in National Two South, but once again, teams experience a roller-coaster of emotions on Saturday.

Worthing Raiders took a huge step to safety with a vital victory over Canterbury while there was joy for Chinnor who saw off the challenge of Barnes to more or less confirm their place after a sensational turn around in fortunes.

But for Dorking and Southend Saxons, defeats for both teams now leaves them with a lot of work to do in the final three games of the campaign.

At the top, Cambridge and the Old Albanian stay separated by five points with both sides seemingly not feeling any pressure as the title race reaches its climax.

Cambridge maintained their five points lead at the top of National Two South after a convincing win over the Redingensians at Old Bath Road.

The away side were ahead 14-7 at the interval thanks to tries from George Bretag-Norris and Albert Portsmouth after George Drury had opened the scoring for the hosts.

Stephen Hipwell’s try extended Cambridge’s lead while the Rams could only manage one score after the break when Robbie Stapley touched down just after the hour.

Michael Ayrton and Jarrod Taylor rounded off proceedings for the league leaders as they stretched their unbeaten run to 11 matches and successfully negotiated their latest hurdle as they continue their surge towards the league title.

As for the Redingensians, their seven game winning streak came to an end, but the newly promoted side look certain for another season in National Two South.

Five second-half tries for the Old Albanian made sure they remained on the coattails of league leaders Cambridge after this win over Clifton.

This encounter was level at the interval as tries from Alfie Tooala Vaelunga and Callum Roberts for Clifton were matched by scores from James Shananhan and Michael Allen for the visitors.

But after the break, the OA’s went through the gears as they secured their 22nd win of the season.

Karl Garside, Lloyd Bickle, Christopher May, Allen and Samuel Lunnon all crossed in the second period as the OA’s continue to keep the pressure on Cambridge as we enter the final three weeks of the campaign.

Third placed Bishops Stortford ran in eight tries for the second time this season against already relegated Launceston as the away side sealed their 19th victory of the campaign.

Stortford won 50-7 in the first fixture between these two sides earlier in the term and once again showed no mercy on route to their latest triumph.

James Rae, Baxter Wilson and Rory Young all crossed for Stortford during a first half in which Launceston defended vigorously. The hosts also did get on the board in the first period when scrum-half Thomas Sandercock dotted down.

Stortford then eased clear after the break as Wilson powered through to secure the bonus point and make it 28-7 just four minutes after the restart.

David Aldam added to Stortford’s tally before a Penalty Try was awarded to the away side with 16 minutes left to play.

Nicholas Hankin then scored a brace before the day was complete for Stortford who look on course for another top three finish this term. As for Launceston, their wait for a first win of the season continues.

Thomas Cowen-Dickie scored a hat-trick as Redruth breezed to a third straight victory thanks to this win against the Old Elthamains.

Cowen Dickie ran in three of his side’s six tries on the way to Redruth securing their 11th win from their last 13 matches.

Samuel Parsons scored twice for Redruth, while Lewis Vinnicombe also crossed for the away side.

The OE’s were always behind in this contest, but were able to secure a bonus point thanks to a brace from Renford Bennett and scores from James Golledge and Charles Edwards.

Taunton Titians picked up just their second win in seven matches after this hard-fought victory over Dorking at Hyde Park.

The hosts scored after just three minutes thanks to a Samuel Prior try, but a double from Ryan Jeffrey gave Dorking a three point lead after the first quarter of this contest.

However, tries from Alec Chase, Jake Caufield and Nicholas Mason made it 28-10 at half-time to Taunton.

Duncan Hales extended the home side’s lead to 23 points four minutes after the interval, but they had no time to settle as Matthew Noble and Cameron Pimlow both dotted down for Dorking to make it 33-24 with still a quarter of this game left to play.

But despite that, Taunton saw the game out while a four-try bonus point for Dorking could prove pivotal in their fight for survival. Currently, they are eight points from safety with three games left to play of the season.

Bury St Edmunds are up to sixth in National Two South after victory over relegation threatened Southend Saxons at Warners Bridge Park.

A brace for Sonny Gay wasn’t enough to give Southend the lead at the break as tries from Matthew Hema, Pierre Peres and Samuel Sterling saw Bury carry a 19-15 advantage into half-time.

Winger Scott Lyle added a penalty to Bury’s total after the break before lock Makulusio Koroiyadi sealed Bury’s fifth win from their last six matches with a top six finish now a realistic possibility for the side that were only promoted into this division 12 months ago.

As for Southend, this defeat could be the final nail in their coffin as they currently sit 14 points from safety. It looks as though they are on borrowed time and their relegation could well be confirmed next week when they take the trip to league leaders Cambridge.

Chinnor are now all but safe from relegation from National Two South as four tries from Henry Lamont helped them to victory over Barnes as they moved 12 points clear of the bottom three.

Chinnor led 19-0 at half-time thanks to tries a brace from Lamont and a try from Samuel Angell in London.

The visitors continued to dominate after the break and Lamont collected two more tries before their control on the game was loosened when Jonathan Phipps was sent-off 15 minutes from the end for striking an opponent.

However, that didn’t seem to disrupt Chinnor’s flow as Oscar Heath completed the rout for the away side who have now won seven of their last nine games in what has been a remarkable turnaround in fortunes for them.

Worthing Raiders picked up a huge victory in their fight against relegation as they saw off the challenge over Canterbury to move eight points clear of the drop zone.

The Raiders, who have now won three of their last seven games, scored first-half tries through George Montgomery, Liam Perkins and Alexander Nielsen but they were behind at the interval.

A double from Oliver Best and a score from Martyn Beaumont gave Canterbury a narrow 19-17 lead at the break.

But, the City Men’s lead was wiped out after the restart as Kiba Richards, James Arthur and Daniel Sargent crossed while Canterbury could only manage one more try through Mason Rosvall.

Both sides sit on 59 points heading into the final three weeks of the season so they know one more win could well be enough to guarantee their places in National Two South for next season.