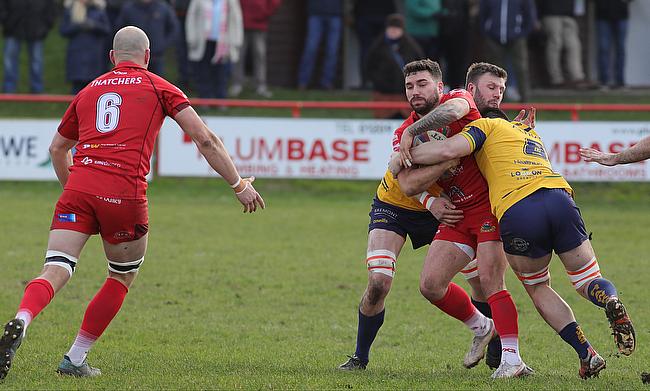 The outcome of Redruth's season may not have been the fairytale ending they were hoping for, but a cluster of their star performers showed their class at Twickenham in the County Championship final.

Nigel Hambly's side missed out on the National Two South title, but some of his troops were still able to collect silverware after Cornwall beat Cheshire 37-24 to retain the Bill Beaumont Cup.

The North-West county were stacked with National One talent, with league winners Caldy and Sale FC dominating their squad, but it was the many representatives from the fourth tier which had the last laugh.

Cornwall's charge was led by Redruth's contingent as Will Trewin's flair and Jack Oulton's nous gave them a 14-0 lead early on.

The latter - who was named in the National Two South Team of the Year - grabbed a second before half-time, but Cheshire's quality began to shine through after the interval with Caldy skipper JJ Dickinson scoring twice.

Redruth No.10 Fraser Honey landed two penalties either side of a Joe Walsh try (Sale FC) and despite Dickinson completing his hat-trick, a third penalty from Honey kept Cornwall in control.

Cinderford's Mike Austin then sealed Cornwall's fourth County Championship in the last six competitions with his late score, which also rounded off an excellent individual campaign.

Perhaps Trewin highlights everything that is good about levels three and four as his lightning-quick score inside the first minute showed exactly why Cornish Pirates have obtained his signature for next season.

Redruth's Jack Simmons then set up Oulton's first effort before the scrum-half added his second as Cornwall raced clear at Twickenham.

Caldy's Ben Jones - National One's leading points scorer - had gone close in the opening period for Cheshire, but it was his club captain Dickinson who capitalised on a yellow-card to haul his side back into the contest.

Oliver Hearn then set the platform for his Caldy colleague to add another and Dickinson was at the heart of Cheshire's third score as his pass was latched onto by the pacy Tom Walsh who dived into the corner.

Honey had pinged over a penalty before that Cheshire try and the Redruth fly-half added two more three-pointers either side of Dickinson's superb hat-trick to help Cornwall into a 30-24 lead.

And any nerves in the Cornwall squad were eased when Austin - one of the emerging talents in National One - secured the victory for his side, who lifted the Bill Beaumont Cup at the expense of Cheshire once again.

After a three-year absence due to the Covid-19 pandemic, the final was a fitting spectacle and shone the spotlight on the fantastic talent which is in the National Leagues and below.

The likes of Taunton Titans and Chinnor were also represented in the Division Two and Division Three finals respectively, with Somerset and Oxfordshire coming out on top.

Taunton's Brett Harvey - who helped Somerset defeat Staffordshire 36-20 said: “It’s a long time coming for a few of us, but a just reward for the group that’s been together this year. We played the way we wanted throughout. It was a brilliant game; we flew out the blocks for the first twenty minutes and fair play to Staffordshire for coming back and causing us to defend well and battle it out for an hour.”

Congratulations to all the National League representatives involved.

Keep your eyes peeled on how you can subscribe to The National League Rugby Review Show for 2022/23 as we begin our plans for the new season!