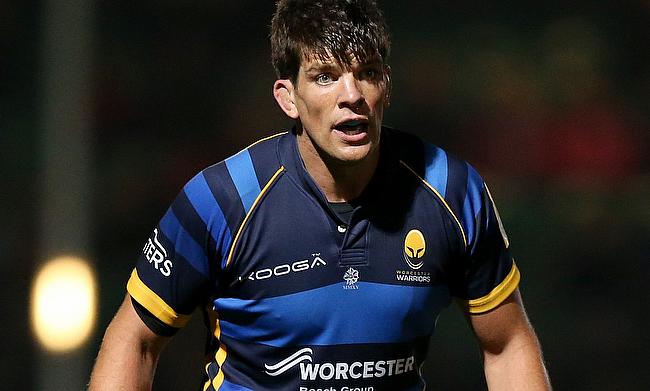 Donncha O'Callaghan was sent off against Leicester
©PA

Worcester Warriors were left to rue Donncha O'Callaghan's red card as Leicester Tigers left it late to secure a 29-20 Premiership victory with a four-try bonus point at Sixways.

Having stormed into a 17-0 lead, Dean Ryan's Worcester side were slowly reeled in by the Tigers as ill-discipline cost them dear.

Four yellow cards in all were handed out to Worcester by referee Wayne Barnes and two of them went to O'Callaghan, the former Ireland lock given his marching orders shortly after half time.

Scores from Wynand Olivier and Matt Cox had put the home side in front early on but Graham Kitchener's score before the break gave Leicester a foothold.

And after the break, with O'Callaghan sent off and Gareth Milasinovich in the sin bin the Tigers eventually made their numbers count as Telusa Veainu went over.

Tom Heathcote kicked well for the Warriors to keep them in front but a penalty try and then replacement Lachlan McCaffrey's late effort sent Leicester home with all five points.

Worcester, who saw off Northampton at Sixways in the season opener, made a dream start against the Tigers.

Heathcote had already kicked the Warriors into an early 3-0 lead when they went over for the game's first try - a fine break from Ryan Mills sucking in defenders before he offloaded to his centre partner Olivier to stroll over.

Heathcote's conversion made it 10-0 and when Mike Williams went off injured for the visitors, Worcester were making it look all too easy.

They soon grabbed their second try - Cox the beneficiary this time as he barged over from close range under the posts.

Heathcote again added the extras and Ryan's troops were 17-0 ahead with only 22 minutes on the clock.

Another Tigers injury - this time to Greg Bateman - saw Tom Youngs introduced and the England star was superb with ball in hand as Leicester searched for a foothold before the interval.

But the same could not be said for his lineout work as, with O'Callaghan in the bin for illegally bringing down a rolling maul, the hooker missed his target at three close-range lineouts.

The unrelenting Tigers pressure was bound to take its toll however and before O'Callaghan could get back on the pitch the visitors hit back - former Warrior Kitchener barging over from close range.

Owen Williams added the extras and Leicester went in at the break only 10 points down at 17-7.

The Tigers' comeback task got a whole lot easier almost immediately after the interval when O'Callaghan was again penalised after a Leicester driving maul, leaving referee Barnes with little choice but to send off the former Ireland lock.

When Milasinovich then saw yellow Worcester were right up against it but the 10 minutes with 13 men only yielded five points for the Tigers - Veainu scoring down the right.

And when Heathcote kicked the hosts back into a 20-12 lead, an improbable Worcester win seemed on the cards.

But the Tigers pack turned the screw and a penalty try - with Cox earning the fourth yellow card of the day - put the Tigers in front for the first time before McCaffrey sealed a four-try bonus point at the death, denying Worcester a losing one in the process.