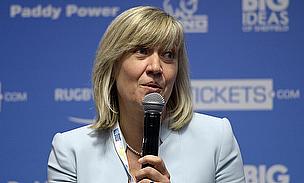 Debbie Jevans has stood down due to personal reasons
©Press Association

Debbie Jevans has resigned as chief executive of the Rugby World Cup 2015 organising committee due to "personal reasons".

Jevans, who was previously director of Olympic sport for the London 2012 games, has been in charge of England Rugby 2015 since October 2012.

"Debbie has been at the helm of the Rugby World Cup Organising Committee since October 2012, and leaves with a highly experienced event delivery executive team in place, with plans for the tournament in excellent shape. All aspects of tournament preparations are on or ahead of schedule, with over 1.9 million tickets sold to date."

Her departure comes just one day after she welcomed confirmation of 15 Rugby World Cup fanzones which will be installed for the tournament, which begins in September.

More than a million people are expected to attend the fanzones which will feature big screens and entertainment in all host cities.

Jevans herself said: "This is the right decision for me to make at this time. I am immensely proud of the team and all that we have achieved in the time that I have been chief executive.

"Everything is in place to ensure that this is the best Rugby World Cup ever, and I am confident my team will deliver an exceptional tournament.

"The organisation is strong, there is a great team in place and I am really looking forward to watching the Rugby World Cup as a fan later this year."

England Rugby 2015 chairman Andy Cosslett added: "On behalf of the ER2015 Board I would like to extend our enormous appreciation for all that Debbie has brought to the role.

"Her legacy will be seen during and after the tournament is delivered, with a sporting event that I fully believe will be both memorable and inspiring, creating a step change in interest and participation for the game in this country."

World Rugby chairman Bernard Lapasset added: "On behalf of World Rugby I would like to thank Debbie for her vision, dedication and leadership in implementing everything we need for an exceptional Rugby World Cup and wish her all the best for the future. We are confident that Rugby World Cup 2015 will be the biggest and best to date."