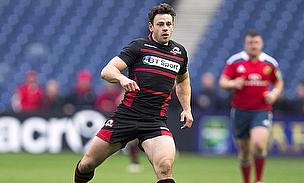 Edinburgh centre Nick De Luca will head for pastures new and join French side Biarritz ahead of the 2015 season.

De Luca, who played 41 times for Scotland, joined Border Reivers in 2006 afer serving an apprenticeship with the Gunners.

He moved to Edinburgh and has played 125 times for the club.

De Luca said: "I would like to thank Edinburgh Rugby for the last eight years.

"I have sunk my heart and soul into the club and loved being a part of it. It's not only where I have learnt my rugby but where I have grown up, had a family and become the person I am today.

"I have been privileged to work with some fantastic coaches, to have rubbed shoulders with some of the world's elite players, and to call some truly inspiring men my friends.

"I will always be proud of my time here and leave with no regrets. I respect the club in their decision to move in a different direction and I wish the young Scottish lads all the best coming through.

"My family and I are ecstatic to be joining a club with such great rugby pedigree and can't wait to get stuck in."

Edinburgh Rugby head coach Alan Solomons, said: "There comes a time in a player's career sometimes, especially when you've been at a club for a long period, that you realise you could benefit from something fresh and new.

"It will be reinvigorating for him, while it opens up opportunities for others in the club, for example young Scottish centres Michael Tait and Chris Dean, who we've already signed for next season.

"Nick [De Luca] has been a great servant of the club over the years and we wish him the very best."