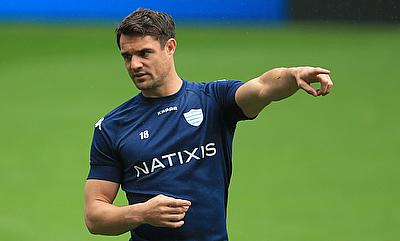 New Zealand and Racing 92 fly-half Dan Carter was lavish in his praise for Saracens counterpart Owen Farrell ahead of the European Champions Cup final on Saturday.

Both players have been a pillar of strength for their respective teams as Farrell with 106 points has been the leading point-scorer in the 2015/16 season while Carter is placed at fourth with 56 points.

On Tuesday, the England international stated he wants to emulate Carter's calmness under pressure and the All Blacks star has responded by saying he is a huge fan of Farrell's "competitive nature".

"I really like his competitive nature, the way that he gets stuck in," Carter said, following Racing's final training session on Friday in a rain-lashed Lyon.

"He's not the biggest guy, but he's extremely physical and he works extremely hard to help his team get the win.

"That's what you want from your team-mates is that competitive nature, and he definitely has that.

"He is an outstanding goal-kicker and he has punished the Racing side on a few occasions in the past with his accurate goal-kicking, and I am sure that will be an important part of his game (on Saturday) as well.

"There are plenty of attributes to like about Owen.”

The last time these two teams met each other was in the semi-final of the 2014/15 season where Saracens edged past Racing 92 12-11.

However, Saracens have been on the receiving end in the tournament deciders in 2014 as they lost to Toulon 23-6 in the Heineken Cup final and a week later they lost to Northampton in the Aviva Premiership final by a narrow margin of 24-20.

After been part of World Cup victory and with four Super Rugby triumphs to his name, Carter is eyeing a clean sweep by winning the Champions Cup final. However, the 34-year-old is aware of the threat Saracens pose.

"It is obviously the pinnacle of European rugby, and a big part of the reason why I wanted to come here," Carter added. "To reach this stage is a hugely proud moment for me, and more importantly, for this team.

"We haven't won anything yet. We are up against a very good Saracens side. We've done well to get here, but the hard work starts now.

"It has been a pretty special 12-14 months with some of the things I've achieved. I am just lucky to be a part of a couple of pretty special teams. Obviously, the All Blacks and what they've achieved, and to be involved now with Racing.

"It (European competition) has been fantastic. It's something I have admired for a while, since I played here six or seven years ago (with Perpignan).

"I saw the standard of European rugby was a lot higher than the (French) club competition, the Top 14, and once you get to the play-offs, that standard goes up another level."

Meanwhile, former Ireland international and coach of Racing 92 Ronan O'Gara believes Carter partnership with number nine Maxime Machenaud will be a key factor for the French team in the final.

"They haven't played that much rugby together, but there's a great thing between them," O'Gara said.

"It's an important combination. The two of them are very different, yet very similar. Max likes getting involved and is taking his game to a new level; Dan's composed, but Dan is also capable of doing something unexpected, which is what singles him out.

"We are here to win something. We are not here to enjoy ourselves. We're here to win, and then we can have fun - that is the club's philosophy."