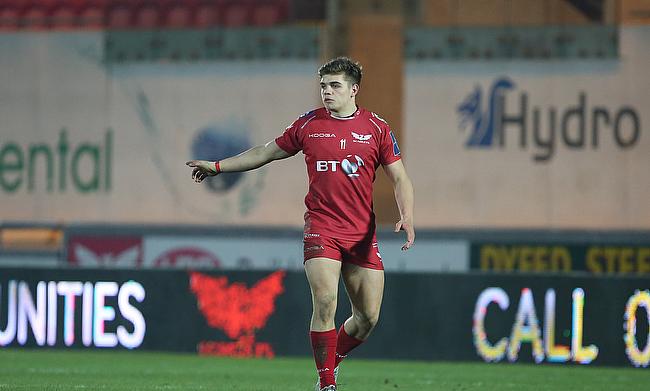 Corey Baldwin made his debut for Scarlets in the Anglo-Welsh cup and caught the eye with a try against Newport-Gwent Dragons.
©Riley Sports Photography

Oskar Hirskyj-Douglas excited by new challenge with Loughborough
Anton Petrowitsch: 'I know I have to move to Europe if I want to achieve great things'
Bianchi red-card proved costly as Italy lose seventh place to Wales U20
Saracens secure 17-32 bonus-point victory despite second half revival from Scarlets

The 18-year old has shone on the international stage for Wales at youth level while his club career has only just begun.

“It is a great thing to hear but I just want to keep my head down and concentrate on what I am doing,” said Corey Baldwin following my question about Wales U20s coach Jason Strange. The answer related to Strange’s praise for Baldwin at the start of the year when he said the winger has the potential to push on in the Wales set-up. The excitement around the gifted back is not just media talk.

The discussion about his future in the game was applied to Baldwin following impressive performances for the U18s and the U20s, where he scored on his debut against Scotland. Strange told Wales Online in January that the 18 year-old could be fast-tracked into the Wales system, just like winger Keelan Giles. It made sense for Strange to say this at the start of 2017. He is yet to be proved wrong and Baldwin will hope it stays that way.

Baldwin, who made his first appearance for Scarlets last season, moved from Surrey to Wales when he was young, but at that time, this highly rated prospect was not purely focused on a career in rugby. “I moved to Wales when I was young and rugby was sort of a way of making friends.  My Dad got a new job when I was little. It was a hard time at the start, but then I started playing rugby and started meeting people and it has just gone on from there.”

Baldwin settled down to life in Wales rather well and started playing with Llandeilo, where he won the Carmarthenshire Scarlets Cup Final on five consecutive years, and continued with them until U16s before he was picked up by Scarlets and the national side. He adds: “I was selected for Scarlets and then selected for Wales too. I played in the Wellington tournament where we played three games and I appeared in the capped match against England.” His performances for club and country prompted talk about a possible step-up in age group in 2015 and Baldwin once again showed his qualities.

“I moved up to the U18 Scarlets team and then was selected for the Wales U18s as well,” he adds.” I went on to play three games during the 5 Nations and from those games, I was selected for the South Africa tour last year." It was only natural for the U18 Wales coach Geraint Lewis to keep counsel of talents like Baldwin, but the back seemed to, and continues to grasp every opportunity with both hands.

His debut for the U18 Welsh squad occurred on the same day as he passed his driving test, but just over a year later, Baldwin was steering himself to greater heights in the rugby world.

At just 18, Baldwin scored on his debut for Scarlets in an Anglo-Welsh cup match against Newport Gwent Dragons and also dotted down on his first appearance for Wales U20s in the Six Nations. Baldwin continues: “I was playing for Scarlets A-League team and also played for Llandovery RFC while at college. They are a semi-professional team, but Scarlets then drafted me in to play in the Anglo-Welsh cup and I scored on debut which I was chuffed about.

“I continued to play with the Dovers, but also played against Saracens in the LV=Cup which led to me playing for Wales. I was training for the Junior World Cup squad, but I had my exams on at the same time which I did want to concentrate on. I still have another year this season to hopefully get a place in that World Cup squad.”

With A-Levels and college over, Baldwin is now full-time at Scarlets, but he has also enrolled at Swansea University. “It is a bit of a juggle to balance both my business management degree and training, but hopefully it will do me good!”

Baldwin’s pedigree and progress in the game now leaves him at the door of the first team at Scarlets and he also has another shot at representing his country at the U20 World Championships next summer. Having put the 2017 tournament to one side to focus on his exams, all roads now lead to Scotland and taking his chances at Parc y Scarlets.

He adds: “ I remember my first game for the U20s and just feeling so supported by everyone. I was getting messages from all of my mates which shows it is such a big moment for anyone who gets there.

“In terms of Scarlets, I have spoken to Wayne [Pivac] a couple of times and he seems to promote youth coming through. He wants everyone to do their best and obviously with a world-class back three, it is going to be very difficult to challenge them. There is also incredible quality across the rest of our back line.

"Hopefully there will be a chance for me and a couple of the other younger players to break through into the Scarlets senior side when they are away with the national team. For the time being, I need to keep my head down, learn as much as I can from them and be ready when an opportunity comes.”

Baldwin is now recovering from a groin injury which he hopes to have fully recovered from by the end of this month. He compares his injury to one which Jonathan Davies had, but Baldwin will be hoping the similarities between him and the Wales international don’t stop there.