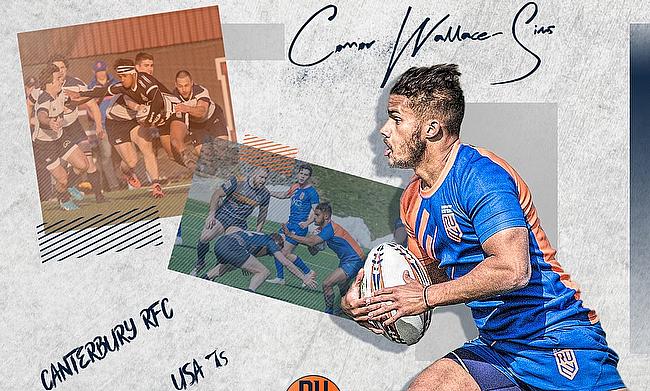 Arnald: The project of establishing this rugby team in New York is very exciting
The sky's the limit for the MLR and new franchise Rugby United New York
'I think the American sporting population will be captivated by the World Cup' - Friday
Seattle Seawolves lift inaugural Major League Rugby championship
Tadhg Leader on life at San Diego and the impact of Major League Rugby

TRU's Ben Mercer caught up with him to discuss how he got to this point in his career and to see where he wants to go from here.

Firstly, how did you end up in NYC in the first place?

After representing the USA under 20s team in Hong Kong, I was told that I had to be playing in the USA or in an Academy in England to be considered for either the 7s or 15s program. I saw an ad on Facebook to go and play in NYC and through Inside Running Rugby, I was put in touch with New York Blue coach Marty Veale who was very keen on having me over to grow and push towards the national side.

You were playing for Canterbury in the UK at the time - how did you find that?

I loved my two seasons at Canterbury, I decided to leave Plymouth after 6th form and try to progress elsewhere. I just rocked up to training and after a few second team games, they gave me an opportunity in the first team. It was great to learn and develop under Andy Pratt and Nicky Little. National Two was a great experience, especially as an 18-year-old playing against guys that have been around a long time.

Bit of action from my last run out with @cantrugby pic.twitter.com/CAmZjXwfbX

You've played a lot of 7s - what's the 7s scene like over in the US? Have you found it's improved your 15s game?

Sevens is very popular in the USA. Even at club level, everyone plays. I kind of feel that it’s taken a little more seriously than 15’s at times. I always struggle bouncing back and forth between 7s and 15s. The fitness needed for each is so different. However, on the skill side it definitely helps, 1 on 1 defence, footwork, passing etc.

Were you full time in NY when you arrived - how did you earn money and what do you like to do in the city?

When I first moved to NY, I moved into the Old Blue rugby house based in the boogie down Bronx. I had a couple of side gigs and also worked a few times a week with Play Rugby USA – a non-profit organization that introduces rugby to young kids all over NYC. It was a great experience and something that I still love to get involved with.

When I first arrived, I was 19 and the rest of the guys are all older (legal to drink!). I managed to go out to our sponsor bar, but for the most part, I just explored the city. Now that I am of age, I love to hit up the rooftop bars, brunch and find good coffee spots. I now live in Chinatown which is awesome. It’s right down near the World Trade Centre, lots of cool food spots and hidden speakeasies!

So, are you still working now?

Unfortunately, rugby does not offer NFL type pay over here so a job is a must. I work for an English recruitment company called Oliver James Associates. It’s a great work atmosphere and something new for me as it’s my first office job. I have another teammate who works here too. The managers are very supportive of me playing rugby.

I know you were in San Diego for a bit - how did that come about and what was it like?

I had a couple of decent tournaments and I was invited to come to a couple of USA 7s camps out in Chula Vista where the 7s program is based. I was told that I would find out in the next few weeks what their plan was and when I was back home visiting in England, I got an email with a contract offer…I was delighted! San Diego is a beautiful place and the full-time lifestyle was amazing. The weather is always nice and it's fun to head down to the beach! Meeting all sorts of athletes Olympic or Paralympic was a great experience too.

You've appeared on the World Series 7s a couple of times - tell us about that...

Unfortunately, a teammate got injured the training session before they were set to fly to New Zealand and that evening, Mike Friday gave me the call up- he told me it would be a baptism of fire.

I definitely wasn’t ready but I had to take my shot – it was an unbelievable experience getting to travel and actually step onto the field and one I will never forget. After being released from the squad in January, I felt pretty down and thought it was the end of that but I haven’t given up on the idea of the 2020 Olympics.

What are your commitments to RUNY? How many years - how many games are there this season?

I have been here for 3 years. I recently signed with Rugby United New York for the 2019 season and I have aspirations of breaking into the national team. I think I will stay here until that happens. We have about 16 games and then play offs. I believe our New York side will be a force in the league.

Where do you see rugby going in the US?

As they say rugby in the US is a sleeping beast…I think with the first season of the MLR being so successful and the addition of new teams for the 2019 season is great. Its growing so fast. The pool of untapped talent over here is crazy.

Would you come back to the UK?

All of my family are in the UK, I would love to come back and try my luck and I have always considered doing a stint in Australia or New Zealand, but I also want to be a part of something special in the USA.