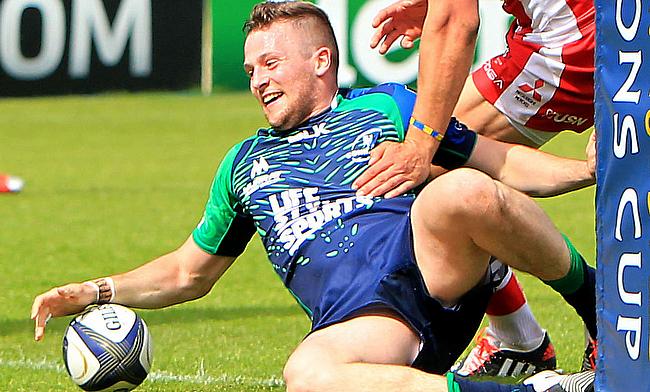 Jack Carty starred with the boot for Connacht
©PA

Replacement Naulia Dawai scored a last minute try and Jack Carty added the conversion as Connacht completed a 20-18 thrilling victory to keep their chances alive in the European Champions Cup at The Sportsground on Saturday.

The thrilling win has taken all of Wasps, Toulouse and Connacht to 13 points in the table but are separated by point difference.

The first point of the game came through Connacht fly-half Jack Carty, who kicked a successful penalty in the eighth minute but scrum half Joe Simpson crossed over to bring Wasps into the lead and Jimmy Gopperth stretched the gap to four points with a conversion.

The hosts were put in a spot of bother when fullback Tiernan O'Halloran was sin-binned in the 25th minute but it did not prove costly as Wasps did not add any point during that phase.

Instead, replacement Danie Poolman rumbled past the line at the stroke of half-time and Pat Lam's men went into half-time at 13-7.

Wasps bounced back sharply in the second half as a double penalty from Gopperth helped them level the scores as the game went into a nervous final 10 minutes.

Wing Josh Bassett calmed Wasps' nerves with a try in the 72nd minute and also increasing the gap to five points but Dawai once again ensured the scores were levelled when he strolled past the line in the extra time and Carty was calm and composed in his final conversion to take Connacht to a two-point win.

"We were just one ruck away from winning that game. I am really disappointed for the players. It's a difficult place to come and get a result against a very good team, but I have no complaints.

"You've got to give Connacht credit for playing till the end when it looked lost to them, but I am really proud of the players and disappointed because I could not have asked for more."