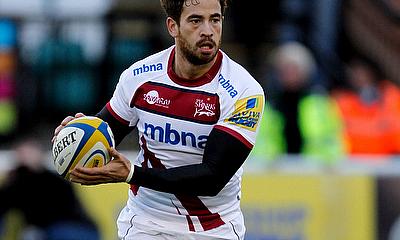 Danny Cipriani crossed for one of Sale's four tries
©PA

Danny Cipriani was among the try-scorers as Sale bounced back from last week's mauling at Saracens to claim their first Aviva Premiership win of the season.

The Sharks were stuffed 41-3 last weekend in their opening match but they were comfortable 27-13 winners over newly-promoted Worcester at the AJ Bell Stadium.

Dean Ryan's Warriors had claimed a last-gasp 13-12 win over Northampton seven days earlier but they met their match in a determined Sale outfit.

Cipriani, overlooked by England for the World Cup, opened the scoring with a fine individual effort and a second try from openside flanker David Seymour sent the hosts in at the break with a 13-6 advantage.

Sale grabbed a third five minutes after the break through Josh Beaumont but Worcester hit back with an effort from Jonny Arr before a last-gasp fourth home try from Johnny Leota sealed a bonus point win.

Cipriani's over-ambitious pass had Sale in trouble early on when Worcester winger Cooper Vuna intercepted but lacked the pace to make Sale pay.

That early error from Cipriani could easily have proved costly, but from there Sale took control and began to dominate possession and territory.

A clever kick from Cipriani led to a line-out from which his side led in the seventh minute.

Sale produced a fine driving maul which drove Worcester back towards their own line, culminating in scrum-half Chris Cusiter finding Cipriani with a short pass 10 metres out.

Cipriani showed his class to evade the attention of a Worcester defender and dart over the line for a try.

It was another remind of the fly-half's rare talent and, although he failed to convert the score, Cipriani continued to exert a significant influence on proceedings.

Two long-range penalties from Worcester centre Ryan Mills put Worcester 6-5 ahead before another driving maul led to Seymour, the openside flanker diving over the line inside the left channel for Sale's second try.

Sale scored again five minutes into the second half when Beaumont, the 22-year-old son of former England captain Bill Beaumont, picked up the ball from the back of a scrum and ran through to score.

From there Worcester gradually improved and they deserved the try which brought them back into the game.

Arr went over from a scrum inside the right channel with 15 minutes remaining and replacement fly-half Ryan Lamb added the extras to set up a tense finish.

But Sale held on with relative comfort and claimed a maximum five-point haul when Leota went over late on.