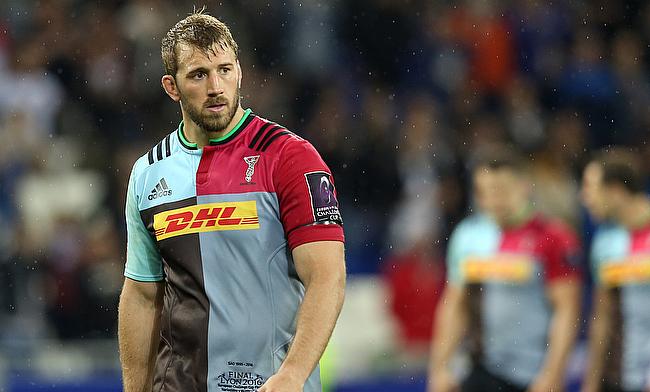 Chris Robshaw has signed a new deal with Harlequins
©PA

May, Slater swap confirmed by Gloucester and Leicester
Jonny May, Ed Slater poised for a swap

Former England captain Chris Robshaw insisted that he prefers to be compared with Tony Adams rather than Jonny May's nick name of 'Maymar'.

May was a part of the swap deal that saw him move to Leicester Tigers despite his original contract with the Cherry and Whites finishing with the upcoming season with Ed Slater moving the other way round. As a result, Premiership Rugby clubs have unanimously agreed for a regulation in the league's transfer fees.

The 27-year-old's move to Welford Road was jokingly compared to Neymar's £200.6million switch from Barcelona to Paris St Germain and Robshaw, who recently penned a new three year with his club Harlequins said: "Jonny May has had a little bit of stick about being called Meymar! They are slightly different contracts I am sure.

"It's coming more and more into the game with TV money and sponsorship. People aren't necessarily letting contracts run out which is what they used to do.

"I have signed a contract extension here with a year still left. When I first started you were waiting a lot further down the line to address that."

When asked about which footballer, he would like to be compared with Robshaw, who is an Arsenal fan added: "I do like Tony Adams, I'm reading his book at the moment. But Tony Adams without the drink! He's not a bad footballer to be compared to,"

"It's just very interesting - what he's done, some of experiences, some of his phrases and mottos.

"He talks about the Alcoholics Anonymous and what they say - the past is history, the future is a mystery, today is a gift and that's why it's the present.

"It's saying to always remember to live in the here and now. As players we're always aspiring to play at the weekend, so it's important to enjoy the moment and work hard."