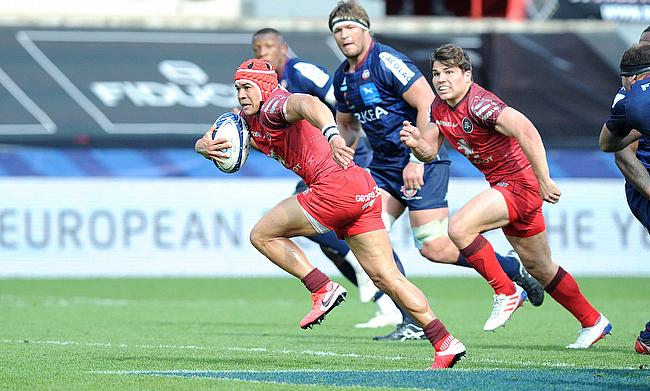 Will Skelton: 'We are not just playing out there for us - We are playing for our fans, families and friends'
Match Centre: Toulouse 21-9 Bordeaux Begles
Charlie Faumuina Exclusive: 'We will try to get to that final and win the thing'
South Africa's World Cup winner Cheslin Kolbe prefers Lions series over Tokyo Olympics

Only twice in the last 10 years have additions been made to Toulouse’s trophy cabinet. Apart from Top 14 triumphs in 2012 and 2019, it has been quite a barren spell for the French giants by their standards.

And on the continent, their success has been paused for over a decade.

Not since 2010 have the famous Toulouse tasted European glory. The boots of Florian Flitz and David Skrela guided Guy Novès’ side to a 21-19 victory against Biarritz, but back then, collecting silverware was the currency of the club.

Novès won nine league titles and four Champions Cups during his 22-year tenure and Les rouge et noir have earned the right to romanticise about their glory days, but with a rich history comes a burning expectation.

With the Top 14 season cancelled last year due to the Covid-19 pandemic, the new generation at the Stade Ernest-Wallon are still the current reigning champions in France and now they are on the verge of adding a record fifth European crown to their name when they take on La Rochelle at Twickenham.

This weekend will be Toulouse’s seventh Champions Cup final and whilst there is a reliance on a full squad effort to reach these showpiece events, the club’s star individuals have certainly led by example.

Antonie Dupont and Romain Ntamack need no introduction and neither does Cheslin Kolbe. The 27-year-old South African has experienced a swift rise to prominence since making the decision to join Toulouse in 2017 and his exploits for both club and country have made him one of the most dangerous wingers on the planet.

His journey to World Cup and Champions Cup finals is made all the more remarkable given Kolbe didn’t earn his first cap for the Springboks until 2018 after being deemed too small to play on the international stage.

“Obviously for me at the time, I made the decision to join Toulouse and I had a lot of chats with a few players that have been here, especially South African boys,” Kolbe said. “Watching the club play and the brand of rugby, it is literally the French flair.

“They just want to play with the ball and that is exactly what I love and that is what I strive for on the field. When I got here, I just wanted to obviously find my feet as quickly as possible, but I must say the players and the coaching staff just backed me all the way. It just gave me the freedom just to play what is in front of me and obviously with that bit of freedom, you feel at ease and you feel yourself. Toulouse has definitely played a massive part in my success.”

The last sentence of his answer cannot be overstated. Before leaving South Africa behind, not even Kolbe himself would have envisaged what he has achieved in a relatively small period of time so when he is quick to praise the club, it comes from the heart.

The winger missed the first three months of Toulouse’s most recent title winning campaign after Kolbe was given the green light to represent South Africa for the first time.

“The club could have said when the season started, there was no way I could leave this early to join up with the Springboks,” Kolbe explains, who was made eligible to play for his country after World Cup winning coach Rassie Erasmus removed the selection policy of only picking overseas players if they had more than 30 caps.

“They could have been a bit difficult for me to leave and get my first Test cap, but they knew how much it meant to me.

“I know at times it has been difficult for me being away for so long and missing out on a few games at the club, but as I said, they just wanted the best for me to succeed and be successful throughout my career.”

The last of Kolbe’s 14 caps came 18 months ago in the World Cup final victory against England. The winger’s dazzling footwork left Owen Farrell transfixed as he scooted over to seal South Africa's destiny, but since that joyous night in Yokohama, the Springboks have not played a single fixture.

Their long-awaited return to action will be in July when they host Georgia in two Tests as part of their preparations for the British and Irish Lions tour.

“It is going to be interesting!” said Kolbe. “I am actually quite excited to see how the boys are going to be going [having not played since November 2019]. I know once you pull over that green and gold jersey, you just leave everything out on the field.

“Once the group is announced, we will definitely have good preparation leading up to the British and Irish Lions tour. I’m sure each and every player will give their all to the jersey.”

On the possibility of playing against the Lions this summer, Kolbe added: “2009 was the first time I got my provincial colours back home and that was the same year the British and Irish Lions toured South Africa. I was always in love with the game, but that was when I fell more and more in love with the game.

“Just watching it on TV, all of the supporters, the majority in the stadium were just red jerseys. The atmosphere all around was just insane. I’ve never seen South Africa as crazy as what it was back in 2009. I’d love to be a part of it because it only happens every 12 years.”

Kolbe is very likely to get that opportunity this summer and in fact, he will be coming up against two potential Springbok returnees on Saturday in the form of Dillyn Leyds and Raymond Rhule who have shone for La Rochelle this term.

“Myself, Dillyn and Raymond, we’ve come a long way,” Kolbe added. “Myself and Dillyn played together since school. We have been roommates with the Stormers so we know each other quite well as well as Raymond. I am just glad to see that players who have had to leave South Africa to prove themselves have showcased their talent.

“I think Dillyn and Ramond are in the same boat as what I was back in 2017/18. They’ve been in unbelievable form and it is up to the coaches back home and what they are thinking for the squad they want coming up into the Lions series. They have definitely put their hand up and I am sure they are being noticed from coaches back home.”

But first, Leyds and Rhule are aiming to secure La Rochelle’s maiden Champions Cup title this weekend, whilst Koble’s attention will be firmly on creating a new piece of history for Toulouse.

“I am aware of it [the history of the club],” Kolbe said. “It’s probably a bit of a long wait for Toulouse not getting the fifth star. There is a lot of expectations from the public, from the club and a bit of pressure on us as players to hopefully try and create history by putting that fifth star onto the jersey.

“I think I am a firm believer in this as well that you shouldn’t get ahead of yourself. Obviously, yes, you do want to go out there and win the game, but there are a whole lot of processes which come before that. We just need to make sure we follow the processes to implement what needs to be implemented on the field.

“It is not each and every day you get the opportunity to play in a final and we are privileged enough to do something we love and hopefully we can showcase that on Saturday.”

It has been 11 long years since Toulouse could last call themselves the Kings of Europe and despite the glory days shaping the club into the French heavyweights that they are, it is outstanding players like Cheslin Kolbe who are eager to start a new dynasty and begin filling up the trophy cabinet once again.