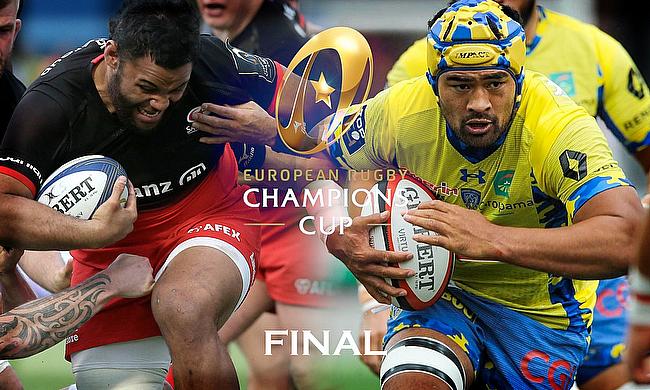 Billy Vunipola and Fritz Lee, the battle of the number 8s
©TRU

After concluding the regular seasons of the domestic championships in England and France at the weekend, all attention now turns back to the European Rugby Champions Cup.

Saracens and Clermont Auvergne geared up for the final this Saturday by resting a number of key players in their Aviva Premiership and Top 14 games respectively, with the likes of Owen Farrell, Maro Itoje, Camille Lopez and Damien Chouly, among several others, rested or at least dropped to the bench.

Fatigue will be no excuse in Edinburgh this weekend and we take a look at the key battles that will help decide whether Saracens begin their European dynasty with a second consecutive title or Clermont finally end their European heartache and banish their Champions Cup demons.

It’s unlikely that Ashton and Strettle will line-up on opposing wings, with Ashton much more likely to face Nick Abendanon, but it is the work rate and desire to see the ball of the two former teammates which makes them key figures in this match.

With two teams as talented and well-coached as Saracens and Clermont, it can often be the individual moments of magic, the execution of skills under pressure, that can be a difference-maker. In Ashton and Strettle, you have two of the hungriest wings in the game.

Both players will look for work off of their wings, whether that’s as a weapon from the set-piece, tracking play in the midfield or running a line that draws defenders and creates space, and as such, whichever player stamps their authority more emphatically upon the game may well end up lifting the trophy.

This pair will have a number of duties at Murrayfield but how they cope with breaking the gain-line with ball-in-hand will be the most pivotal in terms of deciding the outcome.

They aren’t the only players whose carrying will be important for their teams, with Mako Vunipola, Brad Barritt and Arthur Itturia among the others tasked with running hard and straight at the opposition defensive line, but they are the primary options. The consistency with which they get their teams on the front-foot will dictate how well the clubs are able to implement their respective gameplans.

Vunipola’s role dropping back to take kick-offs, clearances and box-kicks will also have a strong bearing on the game, as his runs from deep often pre-empt a Saracens try a phase or two later, such is the defensive focus he draws from opposition sides.

Speaking of those kicks that Vunipola will look to exploit, the battle of control between the half-back pairings will be as critical as any other facet of the game on Saturday.

Wigglesworth and Farrell will come in fresh from a week off, whilst Parra is in a race against time to be fit after suffering a thigh injury against Leinster in the semi-finals. His game management was excellent on that day and he dovetailed superbly with Lopez, but if he isn’t fit, Clermont will have to turn to his deputy, Radosavljevic.

The added control in Lopez’s game this season has been key in Clermont’s march to the final and he will face his toughest challenge yet on Saturday, having to maintain his cool and composure in the face of Saracens’ aggressive blitz defence. If he can continue to kick the corners, put runners through holes and exploit any gaps Saracens give him, without overplaying his hand, he will give Clermont a good chance to end their European duck.

As for Wigglesworth and Farrell, they have been the poster boys of consistency this season. Saracens’ style fits them perfectly and they have no need to reinvent the wheel this weekend. If they give their side more of the same, then there is a strong likelihood they will be lifting their second Champions Cup.

The lineout is a foundation for much of a team’s attacking play and the responsibility for ensuring it runs well will fall on the hookers, George and Kayser.

The likes of George Kruis, Itoje and Chouly will have significant bearing on its fortunes, too, but that need for pinpoint accuracy is not felt as keenly as it is for the two front rowers. The presence of two premiere targets in Itoje and Kruis could just give the advantage to Saracens, but Clermont’s lineout is not a weak one, despite a heavy reliance on Chouly as a jumper.

Away from the lineout, both players offer their sides talented carrying options. George is the more comfortable in space and in the wider channels, whilst Kayser is a powerful presence around the fringes. Unfortunately for Clermont, that is where the Saracens defence is at its strongest, so Kayser will have to bring something special to trouble it.

In addition to fitness concerns over Parra, Clermont are also sweating on Lamerat and Rougerie, with Wesley Fofana’s season curtailed earlier in the year. Both Lamerat and Rougerie picked up knocks against Leinster and though Rougerie did feature at the weekend for Clermont, Lamerat hasn’t appeared since the semi-final.

Finding a way through Barritt and Bosch is difficult at the best of times and it’s a challenge that will not be made any easier by the absence of Lamerat, if he cannot prove his fitness this week. The Frenchman brings an x-factor to the midfield and has the capability to unlock Saracens’ high-intensity press, whilst the Londoners will be more comfortable with the threat that Stanley poses.

Where Clermont’s strength lies is in their wide men of Strettle and Abendanon and the battle between Bosch and Rougerie (or Penaud) will go a long way to deciding the outcome. Can the Argentinean shut down and pressure his opposite number or will Clermont be able to regularly feed their wings in space?

If Strettle and Abendanon can get north of 10 carries each in the game as components in phase play, rather than just returning kicks, the odds may swing in Clermont’s favour.

The game has a feast of compelling narratives and eye-catching match-ups and should prove to be a dream final for the neutrals watching.