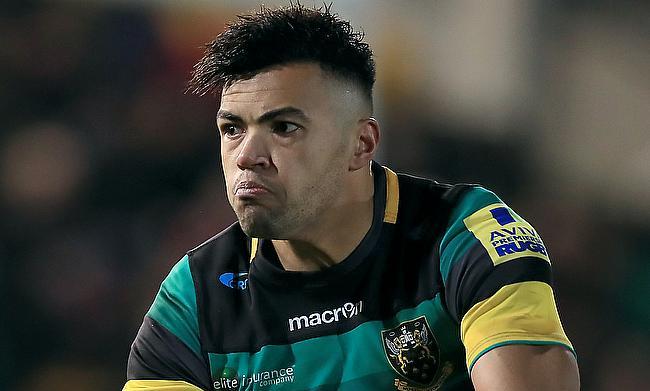 Joe Harvey reviews the latest round of Challenge Cup action, including wins for Northampton Saints and Sale Sharks.

An all-French affair, this was a game of fine margins, with Grenoble coming out on top in Pool 5. First-half tries from Mickael Capelli and Theo Nanette set Grenoble on their way, but Agen ended the half with a score of their own through Loris Tolot, however, it went unconverted.

Agen started the second half with a Fouad Yaha score, but again it was unconverted. An Adrien Latorre penalty was swiftly followed by another Agen try, this time it would be Benito Masilevu who crossed the whitewash. The Agen win was secured when Latorre converted Alexandre Dardet’s 65th minute try.

This was not the best of nights for the Warriors. The English side scored their six points from the boot of Jamie Shillcock, with both penalties coming in the first period. Two-time Rugby World Cup winner Colin Slade was the man to get Pau off to the perfect start.

Big shift from the boys, gutted about the result but loved the support so far away from home. Time to improve and come out firing for the next one. #COYW https://t.co/VfdYl2PuV8

He scored a try within the first minute of action, converting his own effort too. He would complete that same trick at the start of the second half, but the victory was sewn up when Antoine Hastoy converted Julian Blanc’s score three minutes from time.

Carlo Canna was the undisputed man of the match as Zebre overcame a very early Enisei challenge. Halfback Nikita Churashov allowed Yuri Kushnarev to gather two points for himself following a try.

Canna would be doing the same after Guglielmo Palazzani raced over the whitewash and the Italian international also converted his own try after the 20-minute mark. Enisei’s scoring would conclude in the first half when Mikheil Gachechiladze’s try was converted by Kushnarev.

Zebre would push on in the second half. Canna scored a penalty then converted Palazzani’s second try of the game. The game’s final try came five minutes from time. South African born Italy international Johan Meyer stumbled over the try line, allowing Canna to split the posts once more to secure a Zebre victory.

Clermont again proved that the Challenge Cup was below them and they started their trip to the Georgia in the perfect fashion. Hooker Yohan Beheregaray’s score was unconverted, however Alivereti Raka’s would be with the boot of Tim Nanai-Williams supplying the extras. Homegrown wing Vlad Zaharia scampered over the whitewash to open Timisoara’s scoring and Gabriel Conache kicked the conversion with ease.

Loni Uhila ended the first half with another try for the French side and the second half would follow suit. Judicael Cancoriet, George Moala and Paul Jedrasiak all recorded their own efforts, with Nanai-Williams converting all three. The Clermont scoring tirade was only briefly interrupted by Ionut Muresan’s converted score.

Harlequins lost out to Benetton late on after a strong start from the Londoners. Alex Dombrandt scored a try in the first minute of play, but Quins would be pegged back when Luca Sperandio’s effort was converted by the superb Ian McKinley. McKinley would kick two penalties prior to Sperandio’s second score of the game.

?? "We kept letting them back in and it's just not good enough. Fortunately we get another shot next week at them at home."

Dombrandt would score a second try after half-time and this score was converted by Lang, bringing Quins back into the game at half time. Three second-half Marcus Smith penalties were only rivalled by McKinley’s one score from the tee, but an Italian win was secured when Monty Ioane raced over, giving Benetton an historic victory.

Ospreys put over 50 points on their Parisian rivals on Saturday afternoon. Despite this, Morne Steyn was the player to open the scoring. The South African’s penalty was soon wiped out as Sam Davies responded for Ospreys. Steyn would garner another three points just after Cory Allen’s first try was converted by Davies.

Jimmy Yobo opened the scoring for the visitors, four minutes after another Davies penalty, but there would be yet another Allen effort added to the cause for Ospreys. Davies would see out the half with a 43rd minute penalty that came as a result of Mailetoa Hingano’s yellow card.

The second half was virtually all Ospreys. Rhodri Jones, Luke Morgan and Owen Watkin all registered scores at the Liberty, with only a converted Julien Arias effort for Stade interrupting a Welsh onslaught. James Hook kicked the two later conversions, whilst Davies kicked one.

Connacht overcame a stern Perpignan test on Saturday, ending the game with a healthy advantage over their opposition. Darragh Leader registered the first try of the game, racing over in the ninth minute and Australian centre David Horwitz split the posts for two more and did the same after Bundee Aki’s score.

The start of the second half was somewhat more competitive. Jonathan Bousquet and Horwitz traded penalties, before the French team crossed the try line first. Manu Leiataua brought Perpignan into the game further with the try, but the Connacht win was secured four minutes from time. Kyle Godwin crashed over the whitewash, meaning the Irish outfit returned to winning ways.

As promised, this probably was one of the games of this round. The main difference was the conversions.

Bristol started the game much the better. Harry Thacker and Jake Heenan struck for Bristol in the first half, but their efforts would be wiped out with two converted scores by young flanker Gregory Alldritt and lock Romain Sazy. Vincent Rattez struck twice in quick succession, these tries were followed by one from Jeremy Sinzelle and efforts from Bristol’s Tom Pincus and Charlie Powell.

Saints flew out of the blocks in this on as Luther Burrell and Api Ratuniyarawa scored a try each before the game was even 10 minutes old. Derby-born James Fish brought about an end to the first half with another score. Dan Biggar converted Fish’s score, like he did with Ratuniyarawa’s earlier in the half.

Adam Warren finally drew blood for the Dragons with a try one minute into the second half, Josh Lewis helped himself to a conversion. Saints wouldn’t be abated for long.

Two scores from Taqele Naiyaravoro and one from scrum-half Alex Mitchell put the game beyond doubt. Nic Cudd gave Dragons some brief respite, but Ollie Sleightholme (the 18-year-old winger) scored his third try of the season, solidifying a win for Chris Boyd’s side.

Well this game had it all. Darly Domvo opened the scoring extremely early for the home team, but the contest would soon be flipped on its head. A Paolo Odogwu try wasn’t converted but was followed by a Chris Ashton double score, only impeded by a Meret penalty. Ben Curry even popped up with a try, just one minute after Cyril Cazeaux was red carded for foul play.

Things followed the same brief in the second half. Will Cliff converted his own score after Sharks were awarded a penalty try, and he also managed to convert Denny Solomona’s effort in the 65th minute. Sale would be reduced to 14-men permanently after Andrei Ostrikov received his marching orders. The man advantage did allow Bordeaux back into the game as Afa Amosa and Gaetan Dominici scored late on, benefitting from yellow cards to Will Cliff and Solomona in the final minutes of the second half.