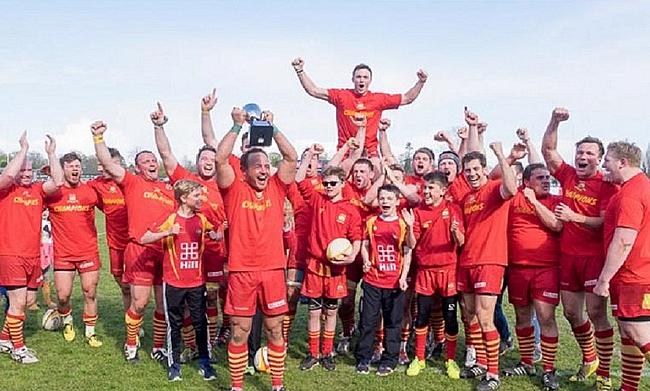 Cambridge have been crowned champions of National Two South and achieved 25 wins on their way to lifting the title.

The Blood and Sand confirmed themselves as league winners on Saturday following their win at Volac Park against Dorking in a title race that has gone right to the very end.

Cambridge along with the Old Albanian have slogged it out for the past few weeks and despite the OA’s thrashing bottom club Launceston (who have ended this seasons winless) they could not snatch the league away from Cambridge.

Instead, the side from St Albans will have to settle for a play-off in two weeks’ time as Rowland Winter’s men claimed the title.

Elsewhere in National Two South, Bishops Stortford and Redruth finished in the top four and there were wins for Chinnor, Canterbury and Worthing Raiders.

Cambridge have been crowned champions of National Two South and earned promotion to National One following this victory at home to Dorking.

Cambridge, who finished seventh last season, opened the scoring via James Stokes, but the league leaders then went behind when Benjamin Marfo crossed for Dorking.

However, the Blood and Sand regained control before half-time as Albert Portsmouth (two), Stefan Liebenburg and James Ayrton all crossed for the hosts.

Liebenburg then claimed Cambridge’s sixth try of the day immediately after the restart before Matthew Higgins dotted down for Dorking.

But, Higgins’ score was merely a consolation for the already relegated Dorking as Brett Daynes and Portsmouth once again crossed to seal the league title for Cambridge.

The Old Albanian thrashed Launceston, but despite the result, it wasn’t enough for them to snatch the league title off Cambridge and they will now after to settle for a play-off spot.

But, this result is the perfect preparation for that play-off game against Sedgley Park in two weeks’ time with the OA’s still having their sights set on an immediate return to National One.

In this encounter, the OA’s were out of sight by the break. Charlie Hughes and Samuel Lunnon both scored two tries and Chris May, Harry Bate and Morgan Thompson one apiece.

This all came after Fraser Honey had given the division’s bottom club a surprise early lead from the tee, but Launceston’s hopes of an upset quickly evaporated.

Bishops Stortford ended the 2015/16 season with a comfortable victory over Bury St Edmunds at Silver Leys.

The hosts led 19-15 at half-time through a brace from Jonathan Neville and a score from James Rae.

Tries from Matthew Hema and Matthew Edison as well as a penalty from Scott Lyle kept Bury in touch with their hosts heading into the second period.

Nicholas Hankin scored the home sides’ fourth try after the break before Mark McCraith and Samuel Winter stretched Stortford’s lead. Samuel Bixby grabbed a well-deserved try for Bury, but Winter added a seventh for Stortford before David Graham touched down late on to secure a losing bonus-point for Bury.

Stortford have now finished in third place for this season following play-off heartbreak last term while Bury St Edmunds have ended this campaign in an impressive seventh place after gaining promotion 12 months ago,

David Mankee converted a late Bradley Howe try as fourth placed Redruth salvaged a draw at home to the Redingensians.

Michael Chandler kicked two penalties and converted tries by Steven Bryant and Jeremy Flynn to put the visitors 20-14 up at the break.

Thomas Cowen-Dickie added to a first-half brace from Lewis Vinncombe to reduce the Redingensians’ lead to just a point immediately after the interval.

Chandler then landed another penalty for the Rams to stretch their lead but a Penalty Try for the hosts put them ahead.

But, their lead didn’t last long as Craig Nightingale and James Gutteridge went in for the hosts. However, there was one more twist to come as Howe crucially touched down with four minutes remaining and Mankee kept his cool to seal a share of the points.

It has been a successful season for both of these sides this year. Redruth have vastly improved on last season’s finish of ninth place while the Redingensians’ late form this term has seen them move away from a relegation battle and end the campaign eighth in table – a year on from promotion.

Duncan Hales scored twice for Taunton Titans as they beat the Old Elthamians, who had lock Gethin Davies sent-off.

Davies was shown a second yellow card for foul play with 20 minutes to go.

By then the Titans led 33-17, Paul Davies, Nicholas Mason, Dan Frost, Jake Woolmare and Hales with the tries while the OE’s points came from scores via Joseph Garratt, James Golledge and Lee Nelmes.

A second try for Hales shortly after Davies’ dismissal ultimately sealed the win for Taunton despite a late cameo from Craig Dowsett for the OE’s.

Chinnor came from behind against already relegated Southend Saxons to finish the 2015/16 season in sixth place.

After a worrying start to the campaign for Chinnor where they found themselves in the relegation zone after 18 matches, they have ended this term with nine wins from 12 games in what has been a remarkable turnaround.

A brace from Iain Meads and a score from Sonny Gay gave Southend a shock 19-0 lead, but Chinnor railed back just before half-time as James Tyas and Oscar Heath crossed for the hosts.

And Chinnor didn’t look back after the break as Heath scored three more tries while Kieron Goss and George Messum both went over for the home side.

Reuben Haile touched down for Southend in the final five minutes of the game, but it was no more than a consolation for the Saxons who will be plying their trade in National Three next season.

Canterbury completed their season with a home victory over Barnes in a pulsating encounter which saw 12 tries scored.

Aiden Moss touched down for Canterbury after just three minutes. Flyn Sager then dotted down for Barnes, but Thomas Burns and Martyn Beaumont extended Canterbury’s lead.

However, Barnes soon found their rhythm with Tom O’Toole, Jamie Collins and Grant Robertson replying before the interval to give the visitors the lead.

But back came Canterbury after half-time as Oliver Best, George Micans, Guy Hilton and Mason Rosvall ran in tries for the hosts to put them in front, while Barnes could only add a Penalty Try to their first half scores.

Worthing Raiders edged a dramatic National Two South encounter as they made it back to back wins to end the campaign thanks to this victory over Clifton.

Daniel Sargent and Alexander Nielsen went over for the home side’s tries with Alan Wheller replying for Clifton in the first-half.

Scott Barlow stretched the Raiders’ lead just after the break before a Callum Roberts score and a Penalty Try reduced the hosts’ lead to just a point as Clifton clawed their way back into this contest.

Jordan Gibson and William Pomphrey then exchanged tries either side of the hour, but the South Gloucestershire couldn’t fashion another clear cut opportunity as Worthing held out for the win.