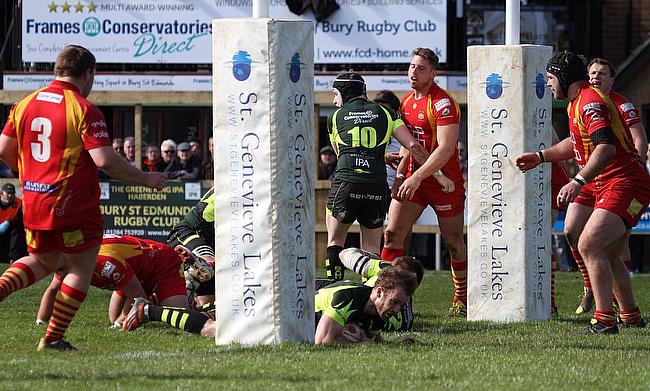 The spotlight was quite rightly on the relegation battle this weekend in National Two South as Worthing and Dorking fought for their survival, but there was also another twist in this amazing title race.

With Cambridge seemingly coasting to the National Two South crown, they suffered a setback away at Bury St Edmunds as their first defeat in 11 games means they now only have a two point gap at the top of this division heading into the final weekend of the season.

Second placed Old Albanian did what they needed to do as they picked up all five points away at Barnes to take the title race right to the wire.

So, to the relegation battle and it was Worthing Raiders who prevailed meaning 12 months after their promotion challenge, Dorking have dropped into the fifth tier English of rugby.

Pierre Peres and Sam Sterling snatched victory for Bury meaning Cambridge now only have a two point lead at the top of National Two South following the Old Albanian’s win over Barnes.

Cambridge led 28-15 at the break thanks to scores from Ean Griffiths, James Stokes, James Ayrton and former Bury player George Bretag-Norris, with Bury’s points coming from Will Affleck and Tim Mann.

Bury flew out of the blocks in the second half as flanker Ben Enoka crossed but Cambridge stayed in control as winger Albert Portsmouth darted over before the drama unfolded.

Scum-half Peres capitalised on a mistake at the scrum from Cambridge to make it 35-29 and Bury then started to up the ante.

Peres then spotted a gap in the Cambridge defence to snipe his way over to give Bury the lead before Sterling latched on to a Chris Lord kick to race over and seal the win for Bury.

James Stokes then kicked a penalty for Cambridge in the last play of the match to earn them two points. As for Bury, they stay sixth in the table.

The OA’s were in complete control in this contest at half-time as they led 40-14 with tries coming from Max Malins, Mike Allan (2), Matt Miles, Andy Daish and Johannes Lombaard after Barnes had looked well in the game with two quick scores midway through the half.

The hosts rumbled over after the interval and followed it up with a bonus-point score, but the OA’s had done enough in the first period to win this encounter.

Jimmy Spiers powered over to wrap up the win for the away side who welcome bottom club Launceston to St Albans this coming Saturday while Cambridge host already relegated Dorking at Volac Park in the final weekend of the season.

Bishops Stortford maintained their grip on third spot in National Two South as they eased to victory over already relegated Southend Saxons.

The visitors led 14-0 at half-time as Nick Hankin and Dave Aldam went over with George Cullen converting both tries.

Tom McCrone and Cullen grabbed second-half tries with the centre making no mistake from the tee again to secure the win in a game which saw three yellow-cards produced to Southend throughout the contest.

Two late tries from Chris Fuca and Luke Jones gave Redruth victory over near neighbours Launceston who are still searching for their first win of the season.

Redruth ran in six tries during the afternoon with Fuca scoring a hat-trick to help the Reds win their 12th league match from their last 14 games.

Redruth were 17-14 ahead at half-time thanks to Fuca’s first score of the afternoon as well as tries from Lewis Vinnicombe and Nielson Webber. Launceston’s points came from the boot of Fraser Honey and a try from Martin Kneebone.

The away side immediately raced clear again after the break as Fuca grabbed his second try of the day, but Launceston weren’t giving up the fight in this local affair as Honey struck over his fourth penalty to bring them back to within seven points.

But, the Reds made sure of the win with late tries from Fuca and Jones to seal a top four finish for them. As for Launceston, their maiden victory of the season will have to come away at the Old Albanian as they remain winless this campaign with one game remaining.

Clifton secured their safety in National Two South thanks to a draw at home to Taunton Titians on Saturday.

Dan Frost and Jake Caulfield gave the Titians and early 14-0 lead, but Michael Uren and Bradley Barnes dotted down to level things up before half-time.

Uren rumbled over after a fine team attack to put Clifton in front for the first time in the match.

Taunton belatedly went on the attack and Aron Sturminski powered over to clinch a share of the points for the Titians while Clifton celebrated their safety.

The Redingensians capped off their final home game of the season with victory over Chinnor.

Rams’ James Gutteridge went over after only three minutes before Nathan Hannay’s score levelled things up. Two Michael Chandler penalties and a try from Sean McDermott gave the home side a 20-7 lead at half-time.

After the break, Samuel Angell darted over the line for Chinnor but George Drury’s try restored the Redingensians lead.

Winger Conor Corrigan ran in the fourth try of the afternoon for the Rams before Hannay grabbed his second score to make it 34-21 heading into the final 10 minutes.

Chandler’s second penalty of the match wrapped up the victory for the Redingensians who sit seventh in National Two South level on points with ninth placed Chinnor.

The Old Elthamians ended a run of six straight defeats with a win against Canterbury at Queen Mary’s.

For 40 minutes, it looked as though it was going to be a seventh successive defeat for the OE’s as Canterbury led 10-9 at the break thanks to a try from Thomas Rogers and a conversion and penalty from Tom Best. His opposite number, Tom White, kicked all nine points for the hosts.

Thomas Burns then crossed for the away side after the break, but the OE’s then upped their game.

Tom Brown dotted down for the home side and another eight points from the boot of White secured the match and a much needed win for the OE’s.

Dorking saw a 20-0 lead slip away from them as they were relegated from National Two South following this defeat to Worthing Raiders in a massive relegation battle at Roundstone Lane.

The away side knew they needed to avoid defeat in this crucial fixture if they were to dodge demotion, but they were unable to achieve that goal.

Dorking did take a deserved lead when Benjamin Marfo and Kariym Irvine touched down as well as two penalties and two conversions from Matthew Noble.

Tries from Alexander Nielsen and Matthew McLean gave the Raiders hope heading into the break and little did they know that Dorking would be unable to score again.

McLean landed a penalty three minutes after the restart to make it 20-15 and the hosts then capitalised on a yellow card shown to Luke Chitty as Liam Perkins dotted down to give the Raiders the lead for the first time in this contest.

Both sides were then reduced to 14 men when Scott Barlow and Oliver Edwards were sinbinned but that didn’t disrupt Worthing’s flow as they confirmed their safety in National Two South with tries from Robert Smith and Finlay Coxon-Smith.