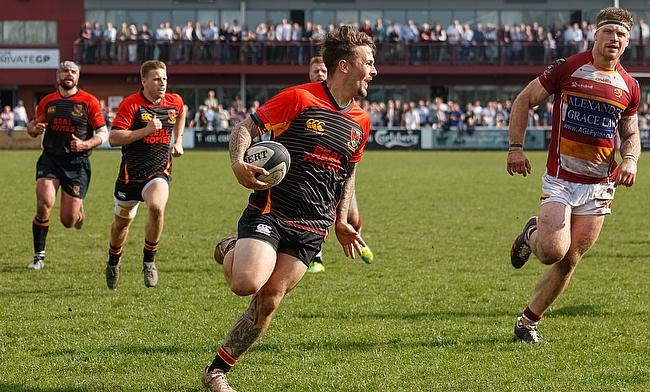 Easter weekend set to be a treat as teams look to avoid cracking under promotion pressure
TJs steal it against Tykes, Field dent Titans tilt, Clifton and Worthing play out pulsating draw
A weekend packed full of subplots in National One and is it last chance saloon for Clifton and Worthing?
Caldy’s Championship quest continues, Hull remain in box seat and five-star Morley keeps Esher on top

Caldy and Sale FC both had to work hard for their latest victories in National One, but a double triumph has set up a mammoth showdown between the division's top two this coming Saturday.

Caldy extended their winning run to 16 matches as the National One league leaders battled to a 32-21 victory away at Rams RFC.

Aneurin Thomas and Oliver Hearn both crossed to put the visitors in front before Michael Dykes replied with a try of his own as the hosts cut the deficit to seven points.

After the break, three points from the boot of Caldy's Ben Jones stretched their lead, but a penalty try for Rams kept the Wirral outfit on their toes.

JJ Dickinson and Jak Rossiter swapped scores before Caldy sealed the win with four minutes remaining as another penalty from Jones and a try from Nick Royle leaves Gareth Davies' men on the edge of glory.

Caldy are seven points clear at the summit heading into their final game of the season, which just so happens to be against second-placed Sale FC who came from behind to beat Blackheath 29-23 to secure what could be a crucial bonus point triumph.

The away side were 20-7 up just after half-time following scores from Harry Dugmore and Oliver Walliker as well as 10 points from the tee via Jake Hennessey.

However, three tries in 13 minutes from Jordan Tebbatt, Andy Hughes and Connor Doherty saw Jonathan Keep's side flip the game on its head.

Neville Edwards' score seven minutes from time made sure Sale scooped up all five points whilst a late penalty from Hennessey ensured 'Club' departed the North West with a losing bonus point.

An 11th successive win for Sale means they are still fighting for promotion and head into their clash with Caldy knowing victory at Paton Field on Saturday would leave the destiny of the title in their control because they have a game in hand over the league leaders.

Caldy win away in Reading.
A late Nick Royle special helped Caldy secure all 5 points on the road against @Rams_RFC
If you haven't already, I'd cancel all plans for next Saturday and get to Paton Field.
We're in for a belter.
1 to go.#Ravers pic.twitter.com/uEhgHLbj0g

As for Blackheath, they are now just three points clear of the relegation zone - with only one game remaining in their season - after rivals Leeds Tykes picked up a potentially vital 42-36 win over Plymouth Albion.

After building a 20-7 lead through Tom Williams, Patrick Case and Harry Jukes, a ding-dong battle ensued in the second period but the Tykes were able to navigate their way to their first win since the beginning of March.

Winger Charlie Venables starred as he scored 22 points for the Yorkshire club whilst four tries from Albion hooker James Salter clinched two bonus points for Plymouth, who are now six points above the trapdoor with two matches left in their campaign.

In terms of Leeds, they have two games in hand over Blackheath, one of which comes against Darlington Mowden Park on Friday night.

Back to the summit of the division and the promotion bids of both Rosslyn Park and Cambridge look set to be over despite Kieran Power's side recording a 26-20 win against the Blood and Sand. There may still be a glimmer of hope for both teams, though, because if Ealing are successful with their appeal and gain promotion to the Premiership, the top two from National One will go up to the Championship.

Elsewhere, Cinderford have climbed back up to fifth spot after a 50-14 success against Darlington Mowden Park. Hooker Nathan Taylor was on fine form once again as he dotted down a hat-trick of tries whilst Bishop's Stortford's Josh Stannard also grabbed a trio of scores in his side's impressive 39-26 win over Chinnor.

Also in National One, fans at Veritas Park were treated to an Easter classic as Taunton Titans' excellent campaign continued with a thrilling 43-40 victory against Tonbridge Juddians.

Reece Dean scored a late converted try as Hull won 28-26 against Fylde to leave themselves just one point away from sealing promotion to National One.

David Fairbrother and Ben Gregory scored inside the first 10 minutes to get Fylde off to a flyer and despite a penalty try being awarded to the league leaders, Tom Carleton's try kept the hosts 12 points in front at half-time.

However after the interval, Gary Pearce's side displayed all of their title credentials as Keane Naylor and Deane gave Hull a two-point advantage but that was quickly wiped out by a second score from Gregory on 64 minutes.

Hull's 17-match winning run was under threat, but Deane's effort seven minutes from time proved to be the difference as the Yorkshire outfit came out on top in this pulsating contest.

The league leaders take on city rivals Hull Ionians on Saturday before concluding the campaign with a trip to Luctonians.

With Rotherham Titans being awarded a walkover win against Harrogate in Round 28, third-placed Sedgley Park kept level on points with the Yorkshire club following a 27-19 victory over Loughborough Students.

Matt Gallagher scored his 33rd try of the season to help the Tigers to a bonus-point win whilst Hull Ionians also secured a maximum after an excellent 42-28 victory at Brantingham Park against Stourbridge.

Elsewhere in National Two North, Luctonians beat Sheffield Tigers 31-19 and Bournville edged past Tynedale 36-31 in the Midlands whilst the home victories continued with Blaydon defeating Chester 38-19 and Wharfedale getting the better of Huddersfield 37-31.

Esher strengthened their grip at the top of National Two South with a 33-11 win against battling Canterbury at The Marine Travel Ground.

Myles Rawstron-Rudd and Jack Lavin crossed before the break for the visitors, but only after Kyan Braithwaite had opened the scoring from the tee for Canterbury.

Prop Theo Skoumbourdis grabbed a try to extend Esher's lead but the City Men did respond with a score of their own via Tristian King.

But tries in the final 10 minutes from Charles Crawley and Phil Cokanasiga wrapped up an eighth consecutive win for Peter Winterbottom's side who remain four points clear of nearest rivals Redruth.

?? The National League Rugby Review Show: Round 28@WMuggleton hosts from @DingsCrusaders as the business end of the season hots up across our three divisions.

The second-placed side defeated Dings Crusaders 31-10 at Shaftesbury Park to take the title race into the penultimate weekend of the campaign.

After the scores were level at the interval, tries from Sam Stevens and Jack Simmons had the Reds searching for that all important bonus point heading into the last minute and a wonderful length of the field move was rounded off by Kyle Bradley as Nigel Hambly's side left Bristol with a maximum.

Although they will be relying on favours from elsewhere, Clifton are still mathematically capable of swooping in and snatching top spot after a thumping 85-14 victory away at Rochford Hundred whilst despite receiving a walkover victory against Westcliff, Worthing Raiders' promotion challenge is over for another year.

Leicester Lions' brilliant home for continued in Round 28 as they made it 13 victories on the bounce in the Midlands after beating Henley Hawks 38-12 and Matthew Bursey came off the bench to score a hat-trick for Bury St Edmunds in their 66-24 triumph against Guernsey Raiders.

Meanwhile, full-back Rob Kirby steered Barnes to a 38-36 victory over Old Albanian and Barnstaple collected just their fourth win of the term after defeating Hinckley 13-10 at Pottington Road.

Subscribe to The National League Rugby Review Show and join us for a thrilling conclusion to the season...